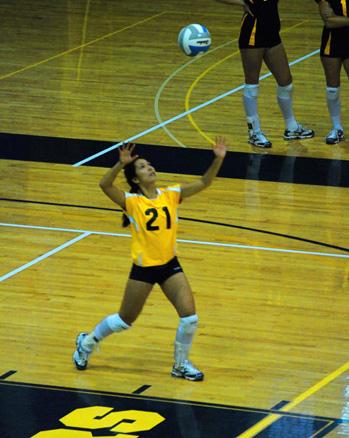 The women’s volleyball team dropped all three matches and continued their inconsistent play this weekend at the second NCAC Power Weekend of the season in Oberlin, Ohio.
The Gators were on the brink of comeback victories in two matches last weekend, but were unable to clinch fifth-set victories for the seventh time, and remain winless in match-deciding sets this season.
“Consistency comes when players are accountable and our team needs to work on that. We all have so much talent. We just have to believe in that talent for every point,” said middle hitter Saige Foster, ’14, who has 158 kills this season.
Allegheny began the weekend with a match against Hiram, who swept the first three sets against the Gators at home last week. The team avoided the sweep this time by forcing a fifth set after being down 2–0 at the beginning of the match. Coach Bridget Sheehan has expressed disappointment in the offense in the past and reiterated that feeling after the winless weekend.
“Our offense has to evolve, so we take away what we need to get better at: our court game, our transition offense, our first-ball-kill offense and being able to hold serves longer in rotation,”  said Sheehan.
The team played another five– setter in their second match against Wooster, but their offensive struggles contributed to the 15–13 win in the fifth set for the Scots.
The top performer for the Gators was Jordan Leopold, ’11, who posted 10 kills and 26 digs, her 11th double-double of the season. Winnie Wong, ’12, surpassed her previous team-high of 35 digs (set against Baldwin Wallace) by totaling 38.
The match against Wooster proved to be the positive note of an overall unsuccessful weekend, with the team viewing their performance as improved, especially on defense.
The solid defensive performance was not enough to compensate for their struggling offense, though.
“Defensively we played well. Our offense wasn’t as good as our defense. We need to work on closing out a team and getting better at that fifth game,” Sheehan said.
The team’s struggles continued against Oberlin on Sunday. Once again, the team was able to force a fifth set after falling down 2–0. The team was unable to maintain its momentum, though, and dropped the final frame 15–10.
As one might expect after a close match, several members of the team shined against the Yeomen. Caitlin Rothman, ’12, finished the match with 19 kills. Rookie Maddie Hudac, ’14, tallied in with 43 assists and 10 digs for another double–double. Winnie Wong, who leads the team in digs with 520 this season, finished with 27.
On a team dominated by freshmen, establishing consistency and adjusting to life as college athletes has been a recurring theme for the Gators.
“Normally we don’t have as many freshmen in the starting lineup as we happen to have this year. They have to mature as players as well as make other adjustments. They’re trying to play like seasoned players in a college environment,” Sheehan said.
While the youth of the team could be viewed as a source of their struggles, the Gators do not want to let that affect their mindset.
“We have to be confident all the time. We can’t use the excuse that we are young,” Foster said.
Although not necessarily indicative of performance, some freshmen are dominating the statistic sheets.  Madie Hudac, leads the team with 919 assists this season while Saige Foster leads the team in blocks with 73.
Claire DeLucia, ‘14, is second on the team in digs with 334 as a defensive specialist for the Gators behind seasoned veteran Winnie Wong, who has 520.
Looking ahead, the team hopes to dispose of the problems that have plagued them throughout the season and keep improving on the aspects of the game where they have suffered.
“We all need to really dig deep and leave everything out on the court these next few games,” DeLucia said. “We need to play with no regrets and like we have nothing to lose.”
The Gators defeated Oberlin in straight sets last night, keeping them in contention for the final NCAC playoff spot. Their final home match will take place on homecoming weekend against Kenyon Oct. 23 at 1 p.m. The Gators need to defeat the Lords to remain in the playoff picture, and will honor graduating seniors Jordan Leopold, and Astrid Nicolau–Raducu at the game.