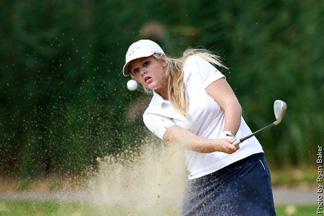 The women’s golf team ended the fall season on a high note by solidifying a No. 4 national ranking after shattering the competition at the Division III Nazareth Invitational in Rochester, N.Y.
Coach Jeff Groff felt that the invitational was somewhat lacking in competition as the Gators finished 71 strokes ahead of the second place team.
“The field was not that strong, but they played two good rounds,” he said.
Despite the lesser challenge at Nazareth, the rest of the fall season posed some strong competition for women’s golf, including the Akron  Invitational, which consisted of mainly Division I schools, including Akron and Ohio Universities.
“This season we had a really strong showing in all of our events and the effort among the team was incredible,” said Julia Wears, ’11. “We traveled to some great tournaments with really competitive fields and proved to ourselves that we are capable of competing among the best Division III teams in the nation.”
The nationally ranked team put on a show at Nazareth with Liz Blyth, ’13, taking first place with a score of 161 (83-78) after gaining momentum in the second round. Hannah Schonau-Taylor, ’11, and Courtney Klein, ’11, took second and third places with scores of 162 (81-81) and 164 (83-81), respectively. Allegheny held four out of the top five and eight out of the top twelve individual finishes.
The team has gained some valuable new members this year in Miranda Santucci, ’14, and Sarah Vorder Bruegge, ’14. Vorder Bruegge finished in the top five in multiple tournaments including a fifth–place finish at Nazareth with a score of 171 after a promising first round of 83 strokes.
“As a freshman, I think it’s really cool to have our first season have gone so well,” she said.
In addition, Laura Hilger, ’11, and Lauren Hammell, ’12, both earned the honor of being named NCAC Women’s Golfers of the Week this season. Hammell took first overall at the Allegheny Invitational while Hilger fired a course–record 71 at the O’Brien Invitational.
Groff assesses that the success of the fall season bodes well for the upcoming season next semester.
“We’ll take some time off now over the winter months and we’ll come back next semester. The goal is always to hopefully get back to nationals, so that’s what we’re going to try to do,” Groff said.
The Gators have made it to the NCAC championship every year since the women’s golf program began five years ago, and the team looks to continue their perfect record.
“To have a showing every year of your existence is something very special to be a part of,” Wears said.
Last year they finished ninth in the nation and are currently ranked fourth, a great leap from last year’s rankings.
The team returns for the spring season on March 18 at the Jekyll Island Collegiate Invitational. The Gators took ninth out of 23 in last year’s tournament.