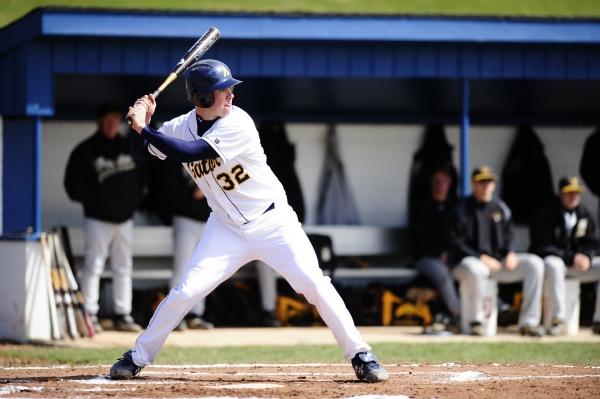 Matt Stahl, '11, is a preseason All-American selection and will anchor the Gator lineup this season. Photo courtesy of Allegheny Sports Information

Last season’s brief appearance in the postseason showed the Gator baseball team that a winning formula calls for a more than the best nine guys on the field. Even though the squad had its best campaign in recent history, their lack of depth hindered them, according to head coach Kelly Swiney, when the games were most important.

This season, the Gators are looking to ride a proven, potent offense, but Swiney pointed out that being able to give his players days off will be a major factor in making the conference tournament and beyond.

“We kind of wore thin [last year] at some defensive positions,” said Swiney. “Guys were out there playing with nagging injuries that they could play through, but they weren’t at 100 percent. This year, I feel we can go five or six deep off the bench with hitters or infielders, or whatever it may be.”

Three years into his coaching tenure, Swiney’s recruiting efforts are starting to pay off, as the Gators now have a 32-man roster and, as he put it,  “have every position covered.”

Having talent on the bench can only mean one thing, though: the Gators have a balanced, championship-caliber starting lineup. First baseman Matt Stahl, ’11, is a preseason All-American selection and the anchor of the batting order. In last year’s campaign, Stahl led the team in nearly every offensive category, and his .500 batting average was the best in the NCAC.

Stahl believes that the strength of the team lies in the offense, which is hoping to take advantage of new bat regulations that aim to make metal bats more like wooden ones. According to the NCAA, the new standards were established in response to increases in home runs and runs scored, which were deemed to be the result of bat performance.

“The way that we play, we’ve never been a team that hits a lot of home runs,” he said. “I don’t expect it to affect us as much as some teams like Wooster that just try to bomb all day.”

The team will look to continue their scrappy mentality this season, as they only lost one hitter from last season’s everyday lineup. Nichols is one of the returning hitters, and believes that the bat changes can only help the team focus on their offensive philosophy.

“[The bats are good for] getting guys to buy into going opposite field, and we’ve got a lot of guys that can do that.”

In order to make bats perform more like wood, the sweet spots have been made smaller and the bats have more weight towards the end. With fewer balls flying out of the park, teams that are more disciplined at the plate have a better chance of success.

Look for the Gators to play a lot of “small ball” this year, as they will have to rely on moving runners around with bunts, hit-and-runs, steals and situational hitting to get runs across the plate.

If last year’s Texas Rangers are a sign of anything, though, a team can’t just rely on their hitting to win big ball games. For how much they retained offensively, the Gators lost the equivalent in their pitching staff, particularly in the bullpen. Though the four-man weekend starting rotation is basically set (Swiney is still deciding on a fourth starter), the losses of relief and mid-week pitchers such as Justin Abbott and James Fago, ’10, have left the door open for many of the younger arms on the squad.

Allegheny has 13 games on the schedule before conference play begins starting tonight in Myrtle Beach, SC against Penn State Abington. Swiney said that having a chunk of games before their first NCAC road trip gives him a chance to establish his starting rotation as well as evaluate which pitchers he can rely on to call out of the bullpen.

Following their annual spring break trip to Florida, the Gators will play doubleheaders against conference opponents Wittenberg and Denison on consecutive days, then return for their first home series with a doubleheader against Penn State Beaver on March 30.

In the third year under Swiney, all signs point to this year as the time for the Gator baseball team to make a run at a conference championship and an NCAA tournament appearance. Nichols has seen the team go from a .500 squad to making the playoffs, and wants to make sure he sees this season’s goals through.

“This year, it’s no-holds-barred,” he said. “There’s no excuse. It’s win the NCAC, not just make the playoffs.”