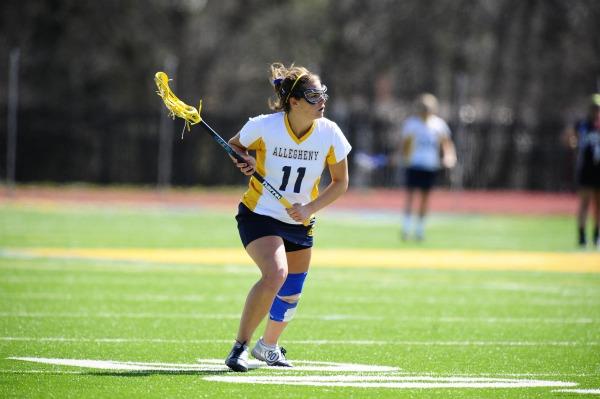 Kiah Voyer-Colbath, '11, will move back to midfield for a Gator squad looking to get to the top of the NCAC. Photo courtesy of Allegheny Sports Information

After a season that ended with nine victories and an NCAC Tournament appearance, the Allegheny women’s lacrosse team was poised for success with veteran head coach Paula Habel at the helm.  The team remained unaware of the change that was to come.
“I was shocked to hear the news that both of our coaches would be leaving,” said senior Jensen Paterson.
Shortly after the fall season ended, the team was informed that their coach had resigned and departed for another school. The Athletic Department and the team quickly began the search for a new coach and ultimately hired Stephanie Janice, the former assistant coach at Goucher College, for the position.
“She brings direction and a unique, determined and focused coaching style,” said two-time All-NCAC selection Kiah Voyer-Colbath, ’12. “I couldn’t be happier with her as a coach and as a person.”
Under the leadership of Janice and armed with experienced veterans, the Gators are ranked third by coaches in the NCAC. With the guidance of their new coach and a sharpened focus, the team hopes to return to the NCAC Tournament.
“With so many new players and our team being very different from the year before, new coaches only helped us move into the direction we were headed in,” Voyer-Colbath said. “They have helped refocus us as a team and have only brought positive direction.”
Janice had a successful college career of her own. She played lacrosse for Division I Johns Hopkins University and helped lead the team to four NCAA Tournament appearances in her time there, and hopes to use her experience to help take the lacrosse program to new heights.
“Heading into the season, it’s very exciting,” said Janice. “It’s a chance for my team to create and establish an identity as the 2011 team themselves and under my leadership as well. I think we’re ready.”
Coach Janice isn’t the only newcomer to the Gators lacrosse program. The team will field six freshmen this season, all of whom were recruited by former head coach Paula Habel.
“They were blank slates and I just tried to get them up to speed,” Janice said. “It’s a new slate for everybody. I couldn’t ask for better freshmen even if I recruited them myself.”
The talented freshmen will be led by several experienced veterans. Paterson, a three-time All-NCAC First Team selection and is the all-time leader in career goals with 148, will lead an attack that features senior Caitlin Fearon and freshmen Kelly Dickson and Monique Villanueva.
Former member of the attack Voyer-Colbath will bring her offensive production (38.5 goals per season average) to the midfield this season along with Abby Silvester, ’11, who was named to the All-NCAC Second Team after scoring 31 goals last season.
The defense is young, but will be led by seniors Colleen Silky and Becca O’Shurak. Sophomore Noel Brouilliard is the only other returning starter for the Gator defense, but Gabriella Tetelman, ’12, will compete for a starting job after having battled injuries during each of her first two seasons.
“We have strong contenders in each position on the field, as well as a strong sense of support for one another,” Silky said.
Looking ahead, the teams to beat are the traditionally dominant Wooster and Kenyon. The Gators have never defeated Wooster’s Fighting Scots in their history and last season handed Kenyon their only loss of the year. The girls and their coach are confident, but insist that no conference foe go ignored.
“We’re not going to take any of our other conference opponents lightly,” Janice said. “We are looking forward to kicking off the competitive rivalry with Kenyon and Ohio Wesleyan, but nobody can be overlooked. They’re all going to be battles.”
The Gators will open the 2011 season on Saturday at 1 p.m. at home versus Fredonia State.