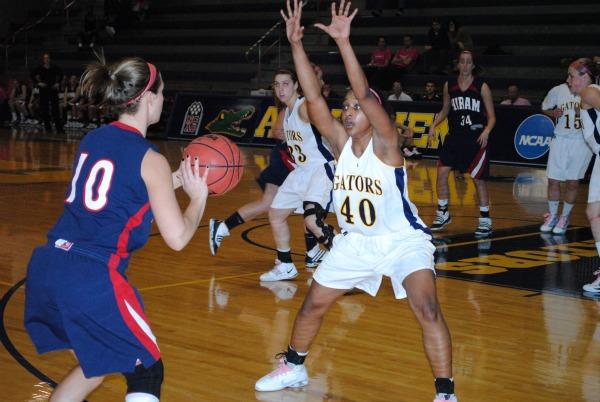 Daryl Ford, ’13, and the rest of the Gator squad will need to crack down on defense this postseason if they hope to make it deep into the NCAC playoffs. The team gives up the second-most points per game in the conference despite having the No. 1 offense in the league. Photo by Charlie Magovern/The Campus

Thanks to a runaway win Wednesday night at Wooster, the women’s basketball team (14-8, 8-4) can cross one of their preseason goals off the list, as the Gators clinched a home NCAC playoff game with the 65-46 victory over the Scots.

Tuesday’s game will be against Hiram or Oberlin, both of which Allegheny swept in the regular season. The Gators defeated Hiram in both contests by double digits. The margin of defeat was even greater against Oberlin, with the team winning by 26 and 43 points.

Hiram is currently in position to play Ohio Wesleyan in the first round, but a loss to the Bishops would put them at risk of falling to seventh in the conference and send them to the Wise Center on Tuesday. Coach Kate Costanzo emphasized three-point defense as a key in defeating the Terriers for the third time this season. In their season sweep of Hiram, the Gators held the Terriers to 23 percent from behind the arc.

If things go as predicted, Allegheny will likely face the Oberlin Yeowomen in the first round. In order to bypass the Gators, the Yeowomen would need to defeat currently unbeaten Denison.

The Yeowomen rely heavily on two of their top scorers to carry the team. Allison Anderson and Kelly Warlich lead an offense that averages 58.4 points per game. The Gators plan to focus on thwarting the prolific Anderson, who led the NCAC in regular season scoring with 15.9 points per game.

Anderson did not play in the first meeting between the teams, a 71-45 Allegheny victory, and Warlich posted four points. In the second meeting, an 80-37 win, Anderson shot poorly from the field, and Warlich had only seven points. The Gators will need to shutdown the offense to defeat the Yeowomen for a third time this season.

The Gators’ offense has been a strong point for the team all season with an NCAC-leading 73.6 points per game. With a strong offense in their arsenal, the Gators will focus on the other aspects of their game.

“We can really score with anyone for the most part, we need to defend and rebound to be successful,” Costanzo said.

The Gators allow an average of 70.7 points per game, making them the second-worst defensive team in the conference. They also allow their opponents to shoot 41 percent from the field, the worst in the NCAC. The Gators have had moderate success defending the three-point shot, with opponents’ shooting percentage at 28.5.

On the surface, it seems the Gators have two stars on their team, senior guard Jill Gregory, and sophomore forward Heidi Goeller. However, Coach Costanzo sees things a little differently.

Costanzo looks to players like Britni Mohney, ’11, who maintains the offensive tempo, and Ann Ryan, ’13, a good defensive player who is a presence on the boards. Saddie Gravatt, ’14, is a good long-range shooter who opens up the court, allowing other players to drive the lanes.

Ultimately, the key to bringing home hardware this postseason will be about going out on the court and executing their game plan.

“We can definitely handle any team in the conference,” said Goeller. “So we just need to buckle down and play our game.”