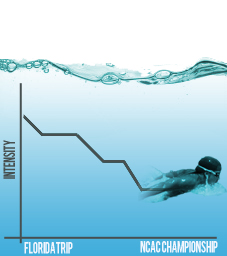 Over the course of the season, Allegheny swimmers reduce the intensity of their workouts as the NCAC Championships approach. Graphic by Dana D'Amico/The Campus

Imagine a finals week where instead of caffeine-fueled all-nighters, poor diet and even poorer hygiene, you studied for an hour and relied on your cumulative work of the semester for the exam.

Now imagine that working, and you getting your best grade of the semester.

This technique, known as tapering, is precisely what every member of the swim team has done with their training regimens leading up to this week’s NCAC Championships in Canton, Ohio.

Unlike other sports, where strategy and technique are all practiced with the assumption that the player is in shape, a successful race in swimming is in many ways the result of a finely-tuned conditioning program.

“I’ve been in the pool an hour and a half to two hours today,” she said yesterday.

For those of us that think of swimming as an anti-drowning strategy, what’s more eye-opening than that being minimal is that the team is normally in the water for up to six hours. Every day.

No wonder their hair is bleached.

The women are in third place behind powerhouses Denison and Kenyon while the men are in fourth place, just three points behind Wooster for the third spot following the first nine events.
Today’s events include the 100 back, fly and breast, plus the 200 freestyle and the 400 I.M. in addition to the 200 medley relay and the 800 freestyle relay.