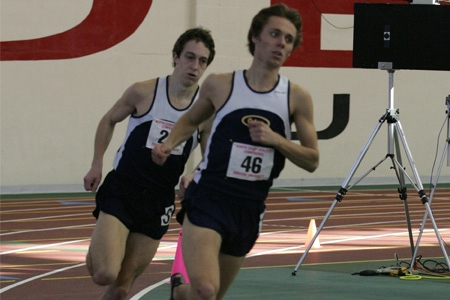 “Our [distance medley relay] kind of reminded our team and the rest of the conference that we are a dominant force,” said Taylor Throckmorton, ’12, who ran the 400m leg of the relay in an impressive 50.5 seconds.

“They know where they’re at, and we definitely need to improve, but they had a national provisional mark for the DMR, so that puts them all on the list to go to nationals,” said head coach Brent Wilkerson. “We’ll look to improve that mark and try to get an automatic time at [the Valentines Invitational].”

“We are actively working on keeping each other motivated to do all the right ‘little things’ such as warming up correctly, following the training plan and working on core and strength after practice,” Dipre said.

With solid performances in recent races, the track and field team has deemed their training in recent weeks to be successful.

“Regardless of good or bad performance, our group understands that the best racing should happen at the end of the season,” Dipre said. “We are good at taking a meet like the NCAC for what it is: a chance to see where we are at fitness-wise early on in the season.

“With that being said, I think the performances in races like the 5k and DMR show that our training is on the right track.”

Despite strong initial performances this season from the distance runners, the team is still training hard and taking an active role in meeting its goals, which include competing for a national championship.

“I know I show up to practice everyday and see the throwers working on form or hitting the weights, the hurdlers doing drills, the sprints group is always doing tough workouts and when we go to meets, I am eager to see all that work pay off,” Throckmorton said.

While the team has shown their talent in the early weeks of the season, they must now turn their focus to practice and determination.

“We know we have the talent to do it, its just going to come down to focus and hard work.”

Next week, the Gators will travel to Mt. Union for the Jim Wuske Invitational, where they will compete against John Carroll, Westminster and others in the second full meet of the season.

Dipre claimed a first-place finish in the 3,000 meters last year, and looks to repeat in an attempt to hit qualifying times for NCAC and national meets later in the season.