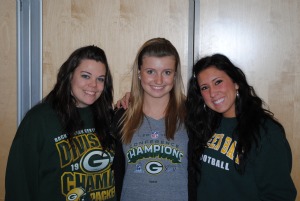 Everyone knows it. From the decorations in McKinley’s to fraternities blasting “Black and Yellow” to your Facebook friends’ profile pictures, it’s clear as we get closer to Super Bowl Sunday that we’re in Steeler country

But how are Packers fans at Allegheny feeling about the prospects of winning Super Bowl XLV?

“If we win, I don’t think I’m going to come out of my room for a week,” said Bethany Walker, ’13, a Wisconsin native.

Daniel Gallegos, the assistant director of communications and sports marketing, entertained the idea of going to a sports bar, but is choosing the comfort of a friend’s house in which he doesn’t have to worry about rowdy Steelers fans.

Though the passion that Steelers fans have for the team is undeniable (the Steelers faithful was rated No.1 in the NFL in an article by ESPN.com last year), we aren’t what I would call hostile. We certainly aren’t even close to Philadelphia fans, who have been compared to violent political protesters by slate.com and can make any visiting fan regret spending $100 dollars for a seat.

Though Walker and Gallegos know that they aren’t actually going to get abused, there really shouldn’t be any reason for them to be afraid of rocking their Green and Yellow on Monday if they win. Their pride makes them undeserving of animosity not just because they don’t dish it out, but also because the Packers are a unique franchise in American sports.

“The fact that they’re owned by the City of Green Bay, the history behind them, what they stand for as a group and the way they handle their business, you can’t ask for a better group of people to be associated with,” said Scott Steiner, director of operations for Parkhurst and longtime Packers fan. “Every time I buy something I know it’s going to the city. It’s not going to some guy who’s going to make money off of it.”

Steiner, a central Pennsylvania resident, started following Green Bay when he was 12 years old because of Brett Favre, but as he got older, his fandom became entrenched in more than a love of No. 4. He was wearing a peculiar outfit, with a Penguins hat and a Packers sweatshirt prominently on display. Steiner explained that he was never able to connect with the Steelers the way he did with the Packers, but likes the Penguins because of how they built their team in recent years. The Pens centered their team around Sidney Crosby, he said, just like how Green Bay has built around Aaron Rodgers.

Gallegos has never lived in a city with a professional sports team, so his loyalty for the Packers was formed in the early 90s when he started watching the games with family friends from Green Bay.

“It’s caught me by surprise how many [Packers fans] there have been everywhere that I’ve lived,” he said. “It’s never been in the majority, but there have at least been fans around.”

Since the team is owned by its supporters, it’s easy to see how the fans would want to share their enthusiasm with someone who doesn’t have anyone to root for.

In addition to Walker, Alicia Seggelink, ’12, Jodi Apps, ’12 and Ben Schwartz, ’14, have all taken Lombardi Avenue to Lambeau Field, and they all expressed the community feeling that surrounds the games that goes beyond light beer, chest paint and bratwurst. Much like Wrigley Field or Fenway Park, Lambeau itself is basically a mansion in a neighborhood.

“The stadium is literally in residential territory,” Apps said. “Whenever I’ve gone to a game I’ve parked in someone’s backyard.”

Schwartz added that the trip to the “frozen tundra” is like a pilgrimage of sorts.

“You’re coming up the freeway and it’s nothing. It’s farmland,” he said. ” And then all of a sudden Lambeau Field just comes out of nowhere.”

All allegiances aside, Sunday’s game should prove to be a very entertaining matchup between two highly balanced teams. The allure of the game isn’t in particular strengths and weaknesses, but more in the fact that no one can really make a solid prediction either way. There’s no Drew Brees reviving New Orleans or Peyton Manning finally getting a super bowl. It’s simply going to be a good game. So enjoy, football fans, and let Monday be a day of celebration, not trash talk.