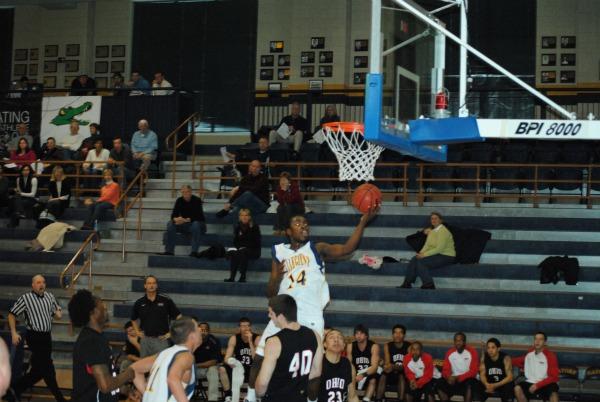 Devone Mcleod, '13, scores two of his 10 points against OWU in Saturday's loss at the Wise Center. Photo by Charlie Magovern/The Campus

Allegheny was unable to stop Tim Brady for a key stretch during Saturday’s NCAC matchup against Ohio Wesleyan, as he keyed an 8-0 run early in the first half that the Gators could never recover from.

Overall, Brady, a junior guard, scored 19 points on 7-14 shooting, which allowed the Battling Bishops to survive the pesky Gators 69-61 on Saturday.

“I was really proud of our guys’ effort today, they fought hard,” said head coach Jim Driggs.  “Brady is just a great player who can hit shots, even when he’s covered.”

Despite shooting better from the field in the first half, Allegheny entered halftime with an 11 point deficit, mainly because of Wesleyan’s five three-pointers to Allegheny’s two. The Gators fought to within seven with around 12 minutes left in the second half, but the Bishops again used a run, this time 12-4, to put the Gators away for good. That run took the score from 51-44 to 63-48.

“Whoever wins the battle of the boards will win the game,” said junior guard Donte Briscoe prior to the game.

Ultimately, he was right, as OWU won the battle of the boards 44 to 37. After taking a 14-12 lead early in the first half, the Bishops were able to keep the Gators at arm’s length while wearing them down throughout the second half.

Coach Driggs was also pleased with the number of touches junior forward James Ness got deep in the post. Ness continued his season long trend of strong games, dropping 24 points on 11-19 shooting. He also grabbed 8 boards. The only other Gator in double digits was sophomore guard Devone McLeod, who had 10 points on 5-15 shooting in addition to four rebounds and three assists.

As Driggs pointed out, the Gators fought hard until the bitter end, cutting the lead from 15 to eight late in the game, but still coming up short in the end.

The Gators are back in action at home on Wednesday against Oberlin, whom they defeated earlier in the year at Oberlin, 83-71. The key to those games will be defense and again rebounding according to Driggs. Oberlin runs a Princeton offense, and the coach feels that as long as they can slow down the Yeomen offense, the Gators will score enough points to win.