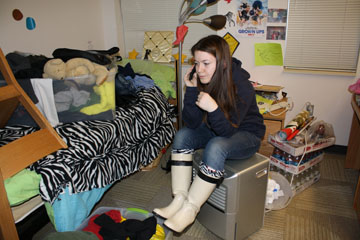 Sarah Bottini, '13, sits atop a dehumidifier in her flooded dorm room

Workers arrived on the scene within forty-five minutes of the burst, pumping out water and setting up dehumidifiers and fans to dry the building out.

Major repairs to the card access and sprinkler systems were finished by Tuesday evening.

For one student, though, the flooding was only the beginning.

Around noon on Tuesday, an Allegheny student received a call from one of her housemates.

“He said, ‘Get home, now. Our house is underwater,’” recalled the student.

She arrived back at North Village and made her way to her apartment, the Chinese House, hopping over puddles of dirty water pooled in the hallway.

When she stepped in, she was shocked.

Her kitchen, flooded; her living room, flooded. A layer of water quivering on the floor. And that was just upstairs.

North Village apartments have two levels. Some have a second story; the Chinese House has a basement.

The student descended to the basement to survey her bedroom.

“My room was in two or three inches of water, at least,” she said. “And there was some coming down my ceiling too.”

Workers had already begun to try and contain the damage, extracting water and bagging up anything they thought might be wet. Anything that had been on the floor during the flood had been damaged. The student counts a calculus textbook, a chemistry textbook, a number of electronics and chargers and several pairs of shoes as irreparably damaged.

Workers also knocked a bottle of prescription medicine over into the flood, rendering it inedible.

According to Joe Hall, the assistant director of Residence Life, it could have been much worse.

“I wouldn’t say there was extensive damage,” said Hall. “The carpet got wet, a very small amount of student items were damaged, but considering what could have happened, it was very minimal.”

“It could have been worse,” said Gillette, noting that most vital repairs, including those to the card access and fire alarm systems, were finished. We’ve got to repair some of the cosmetic items, some drywall was damaged, some of the flooring may start to curl a little bit.”

For the student, though, repairs were the least of her worries.

“A lot of my stuff got damaged, which the school isn’t paying for,” she said. “They said, ‘You have to go through your insurance,’ even for things they messed up themselves, like the medicine.”

The student has a $1,000 deductible on her family’s insurance. After that, she said, the school will pick up the tab on any damages.

Unable to stay in her room for reasons of both health and comfort, she was offered a couple of options until the situation was resolved.

“We had offered students in the apartment the opportunity to change their residency until we could address the issue,” Hall said. “But I don’t believe that any of them took us up on that. They were all fine with staying.”

The student was offered a room in Caflisch, but she opted to stay with a friend instead.

“Some NV buildings have storage rooms downstairs. They had a futon set up there. So I slept in a storage closet,” she said, laughing.

The student has been meeting with several administrators, including Hall, over the last few days, receiving guidance on her insurance claims.

While the immediate problem of extracting water and filing insurance claims is approaching resolution, the student has still not completely re-adjusted.

“It’s taking away from classes,” she said. “It’s in the back of my mind all the time.”

There are still fans in the halls of North Village C and several dehumidifiers still humming in the Chinese House. No other similar incidents have been reported.

“A lot of our facilities are older style facilities,” Hall said. “Sometimes emergencies just pop up. Things happen, things break, and we just respond when called upon.”

Update on March 23, 2020: An Allegheny student is quoted in this story. Her name was included in a previous version of this story, however has been taken out at her request due to current safety concerns.