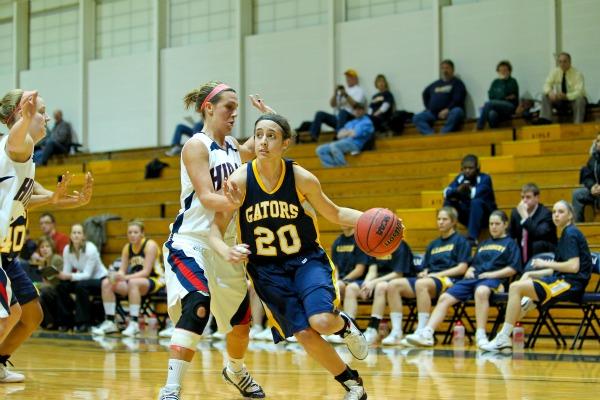 Jill Gregory, '11, is averaging 15.2 points per game this season and will lead the high-octane Gator offense Saturday against OWU. Photo Courtesy of Ryan Baker/Allegheny Sports Information

Nearly halfway through their conference schedule and led by the NCAC’s No. 1 offense, the Allegheny women’s basketball team is on track to meet their first major goal of a hosting a first round playoff game.

Guard Jill Gregory, ’11, and forward Heidi Goeller, ’13 are spearheading an upbeat Gator offense that is averaging 73.4 points per game. This style gives the edge to a squad that is somewhat undersized, but also quicker and better conditioned.

Goeller is the lone forward in Allegheny’s 4-1 setup on offense, which gives her more space to move around against more sizeable opponents. Her athleticism has also given her a distinct advantage in transition, which is a major factor in her 15.2 points per game average.

“Heidi runs the floor very well. In that position we are a lot more athletic than other teams,” said head coach Kate Costanzo. “A lot of players we play against are thicker, more solid, back-to-the-basket posts. So if we can get Heidi running, we’re in good shape.”

In order to get the transition game going, though, the Gators have spent the last two days focusing on playing tighter defense. Costanzo really wants to play tighter, “in your shorts” defense, which Gregory said can only help their fast-paced offense.

“If we do crank up the defense and get some easy turnovers from the other teams it will result in our running game happening and getting easy points that way,” said Gregory, who leads the team with 25 steals.

Improved rebounding is also a goal for the team as they get ready for Saturday’s conference matchup against Ohio Wesleyan. Allegheny is right in the middle of the conference in rebounds per game and is basically even in rebound differential, so gaining an advantage on the boards could easily translate to more points.

Though they fell to OWU in an 86-92 track race earlier in the season, the Gators have an entire week—their longest stretch between games of the season—to prepare for the Battling Bishops.

The team spent Monday and Tuesday working on team improvement and will focus on their strategy for Saturday today and Friday, which ultimately comes down to shutting down OWU’s top players.

Allegheny will look to contain OWU’s “big three,” which includes guards Pam Quigney and Tyler Cordell and forward Kayla Gordan. All three are averaging over 15 points per game, with the next highest player scoring just 5.9 points per game, making it to Allegheny’s advantage to force other Bishops to make more significant contributions.

“I think we’ll be able to lock down on them more and not let them go on such large runs,” Goeller said.

With the Bishops ahead of Allegheny by one game in the standings, Saturday presents an opportunity to not only move up to a tie with OWU, but also emerge from the middle of the pack in the conference heading into the final six games.

“We match up well against them, and I think we can run on them when we need to and win the rebounding battles, which is going to be a key for that game,” Costanzo said.

Ohio Wesleyan is only one spot ahead of Allegheny in team defense, so don’t be surprised to see the Gators put up big numbers on offense. With a 1 p.m. start scheduled for Saturday at the Wise Center, the team is expecting a sixth man to help them pull out a win and move to 5-2 in the conference.

“Having a crowd is huge,” Goeller said. “Whenever you have people there to play for in the stands it puts you over the edge. It’s home court advantage and they don’t have that.”