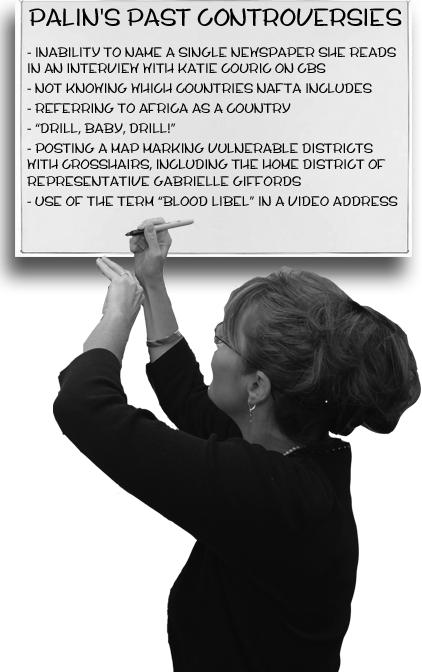 I have a problem with Sarah Palin, though not the same problem that most of the media does.
She and I currently are at odds because I spend too much time trying to defend not her Republican message but her public image.  And it seems like she spends much of her time doing the same.
During the 2008 election, and until recently, I’ve been a believer in Palin’s persona.  She was every liberal’s public enemy number one, which I absolutely loved.
She mixed up the system, took the George Bush folksiness to a whole new level and she’s from Alaska.
These are things that do American politics justice.
Our system needs a Sarah Palin because she isn’t the typical Washington policy wonk.
It’s refreshing, but at the same time, it’s exhausting trying to defend her political image as opposed to her politics.
For the most part, her policy ideas are solid.
They generally reflect the ideas of the Republican leadership, which I think are beneficial to our country.
However, her public performances make me cringe at times.
It’s almost like looking at the hashbrown casserole served at Brooks and picking out the first bite.
You know the bite is there, it just takes some thinking before you dive in.
Nonetheless, I don’t believe Palin’s policy ideas are what get her in trouble.
It’s when she tries to articulate them.
Take the recent situation with Palin’s target map the media got so crazed over.
SarahPAC, a political action committee formed  by Palin, created a map with 20 “targets” for Republican takeover in the 2010 mid-term elections.
Depicted on the map were those districts under the crosshairs of a gun-sight.
One of those 20 districts was Arizona’s 9th District, represented by Gabrielle Giffords, who was wounded during the shootings in Tuscon, Arizona.
The rhetoric of target districts in campaign politics has been around forever.  Target rhetoric is not limited to politics either.
We see that rhetoric in different sports.  We see targets used to describe media audiences and business practices.  In politics, targets are used regularly and by both parties.  It’s an unfortunate coincidence that Gabrielle Giffords’ district was one of those 20 targeted districts.
The intent of the map was not literal; it was figurative and political.  Targets for politics, not targets for blood.  I’m hesitant to believe Jared Loughner’s actions were because he took the SarahPAC’s advice literally.
Some looked at Palin’s political tactics as a possible source of Loughner’s motivation.  Media outlets interpreted the target map as part of a wave of heated rhetoric in America.

It’s true that the rhetoric exists, but it isn’t by just one party, it’s from both.
For the media to say Jared Loughner’s main motivation was political rhetoric would be simple-minded.
Palin’s statement following the tragedy in Tucson wasn’t matter-of-fact.
In dismissing media claims, she could’ve cited  obvious points in her favor.
But instead, she used the classic I-know-you-are-but-what-am-I route.
Another definite moment of cringing.
Palin took to blaming the media for their “blood libel” in their coverage of the tragic events.
It was not the best political move to make, considering the circumstances.
Palin was correct in the sense that the media was politicizing the event which, consequently, made the rhetoric even more bitter between our people.
But calling it “blood libel” in an address the day after a victim’s eulogy?
Considering the historical significance of the term “blood libel” and its ties to anti-semitism and Nazism, this was another big cringe moment for me.
I think Sarah Palin’s message is solid, but how she says it makes me wonder.
The media  doesn’t focus on her ideas, they focus on her delivery.
It’s a catch-22 for Palin.
She’s popular because of her delivery and despised for it at the same time.
Here’s my advice to Palin: keep the folksy persona.
It’s refreshing.
But refine your delivery.
It will greatly benefit the Republican party, and maybe even help your chances in 2012.