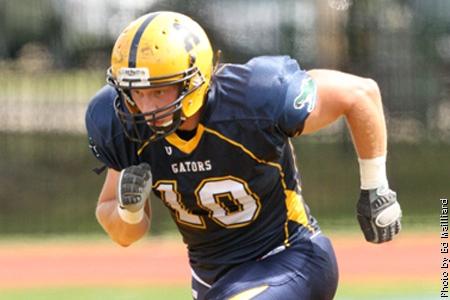 Robert Carlisle, ’11, became the 30th athlete in school history to be named an Academic All-American. Photo courtesy of Ed Mailliard/alleghenysports.com

“Thursday it was turkey and football all day, so it was the perfect week,” said Carlisle.

Not to mention he’s been accepted into medical school since October and is also a Cornerstone Award recipient.

Though his accolades are pouring in left and right, Carlisle’s time at Allegheny is a refreshing reminder that doing a few things very well can be just as impressive as stacking up “unusual combinations” to build a resume.

Being a football player in-season is a four-hour daily commitment. If they aren’t practicing, players have mandatory meetings plus weight training and conditioning during the week. This leaves less time for schoolwork, but unlike some of his teammates, Carlisle explained that he found it easier to be successful during the fall.

“I always found that football season actually helped because you know you only have a certain amount of time to work on homework and get stuff done,” he said.

A biochemistry major with a 3.95 GPA, Carlisle is an expert at time management, is a reflection of his priorities.

“You’re coming to college to get an education, so yeah, you can have fun, but our coach always said, ‘You’re a student before you’re an athlete,’ and I think guys really need to understand that,” he said.

And with his nose constantly to the grindstone, it’s a good thing that he didn’t have to submit anything to be considered for Academic All-American status.

Considering his position and personality, it isn’t surprising that the glory of Academic All-American status wasn’t in his sights during the season.

Tight ends are rarely the ones streaking down the sidelines for touchdowns. Instead, Carlisle shows up on the stat sheet as the receiver who made the four-yard catch for a first down, or on film as the key block on a sweep that goes for a big gain.

With football now out of the picture, Carlisle is looking forward to a relaxing second semester. Free time is not something he is used to. He even said it is “weird” to have four extra hours every day.

Even though he missed out some fun things on campus, he looks back at his football career with no regrets.

“I wouldn’t give [football] up for the world,” he said. “I mean sure we missed some school things, like I think we missed Wingfest a couple years, but you only get six wings anyway.”