Gators downed by Frostburg; Respond with win at Oberlin 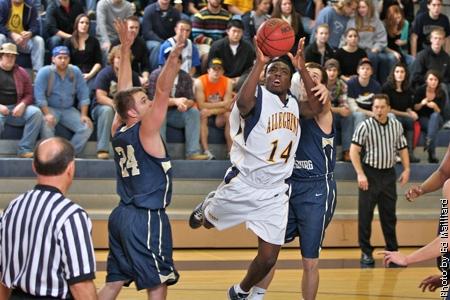 Devone McLeod, ’12, scored 16 points in last week’s 75-67 loss to Frostburg State. The Gators kicked off their NCAC season with an 83-71 victory against Oberlin last night and face Wittenberg Saturday at home. Photo courtesy of Ed Mailliard/alleghenysports.com

After a blowout victory over Penn State New Kensington last week, the men’s basketball team struggled to follow their game plan Monday night against Frostburg State, losing 75-67 at the Wise Center.  The team played hard and competed well, but it was the Bobcats’ rebounding that cost the Gators the game.

Head coach Jim Driggs thought the team needed to do two things to win: outrebound Frostburg State and keep them off the foul line, both of which the Gators struggled to do.  They also wanted to slow the pace of the game down by forcing both teams to play half-court offenses.

“Offensively we wanted to push the ball in transition and get easy transition scores,” said Driggs. “And if we couldn’t, then we wanted to get ball reversal to [James] Ness [’12].”

The free throws proved to be the difference in the game, as Frostburg State went 22 for 29, compared to Allegheny’s 7 for 14.

“We played great defense but did not rebound well, which ultimately led to us getting into foul trouble on their second shots,” said guard Devone McLeod, ’13, who scored 16 points in the game.

Driggs said they played hard but needed to play smarter.

“In games we’ve won, we’ve outrebounded our opponents,” he said. “Games where we’ve taken care of the ball, we’ve had more success. Games where we turn the ball over, we’ve struggled.”

The biggest area where the team can improve is in the strength and conditioning of the freshman, Driggs said.  He believes this will come with the team’s weight training program and more practice time.

He also pointed out that he isn’t the only new member of the team, as the Gator roster features eight freshman out of 14 total players, four of which saw action against Frostburg State.

“Our guys are very young and it’s a new system for everyone involved,” Driggs said. “I’m very happy with the effort, it just takes time.”

Driggs has been happy with performances off the bench, which have mostly come from freshman such as Bobby Theiss and Ryan Stanko. Both saw playing time against Frostburg State and Stanko scored 10 points.

“Our bench gives us great minutes. But they do many things that most don’t get to see, [like] prepare the starters for games by really pushing us in practice,” McLeod said.

Freshman D’Andre Corbin has also made an impact starting at guard and is now the team leader in assists and the third leading scorer. Such performances will be pivotal for the team as they head into conference play.

“We are a young team with a ton of potential, along with the heart and desire to be great,” said Seth Eisner, the only senior on the team.  “We have worked hard the past few months and feel that we are improving on a daily basis.”

The Gators kicked off conference play with an 83-71 win last night against Oberlin.

Allegheny took a 41-24 lead into the locker room, which was enough to hold off the Yeomen, who played much better in the second half.

McLeod led the way for the Gators, scoring 20 points and dishing out eight assists.

James Ness, ’12, added 18 points and six rebounds as the team’s main presence in the paint. Though they won comfortably, Allegheny struggled from shooting free throws, going 8 for 18.

As the team heads into Saturday’s game against Wittenberg, the team looks to rely on each other, not one star player, to stay competitive in the NCAC.

“Coach Driggs does a great job of teaching and keeping us motivated,” Eisner said. “If we stick to our principles and stay positive, we are going to be a strong competitor in our conference.”