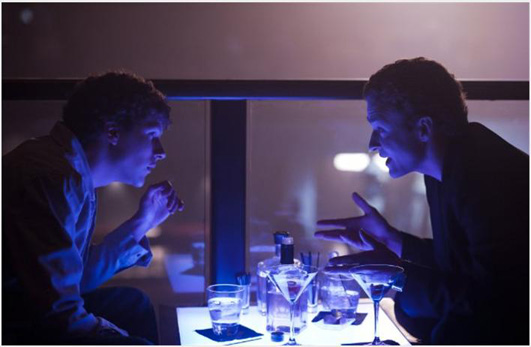 David Fincher, the director behind “Fight Club,” “The Curious Case of Benjamin Button” and now, “The Social Network,” said that the story of Mark Zuckerberg, the creator of Facebook, is so compelling because Zuckerberg is a modern-day Citizen Kane.

The elements — a young man who rises to extreme power and loses his friends and his humanity in the process — are certainly there.

But to compare Zuckerberg to Kane is to assume that the young man ever had friends or humanity to begin with, two things that Fincher, working with screenwriter Aaron Sorkin, has not given his subject.

Zuckerberg (played by the fantastic Jesse Eisenberg) is portrayed as a fiercely intelligent, heavily guarded egomaniac.

He is an outsider, even among his small group of roommates.

He haunts the online blogging site LiveJournal, where he posts drunken, sexist rants about his ex-girlfriend, and never looks fully comfortable without a computer in front of him.

The man responsible for Facebook, the website which changed social interaction forever, has essentially no people skills.

This is true of Facebook itself which, like its creator, is deeply impersonal at its core, offering virtual communities to people as a substitute for face-to-face interaction.

Before Zuckerberg’s success is shown, we already know that his best friend (or, more appropriately, the guy who tolerates Zuckerberg the longest) and Facebook co-creator, Eduardo Saverin, is suing him.

Saverin, played by the talented British actor Andrew Garfield, is both the heart and the cash cow behind Facebook.

He allows himself to be strung along as Zuckerberg’s ego and power quickly rise.

The desire for more status takes Zuckerberg out to California, where he meets Napster founder Sean Parker, played by Justin Timberlake.

Only the outlines of the real Parker remain — the paranoia, the drugs, the ego — but by casting Timberlake in the role, Fincher aims to make Parker more of a sexy glamour boy than Parker was in real life.

The director has said he did this because, to the geeky, awkward Zuckerberg, Parker was exactly that. Parker is the catalyst to and instigator of the total breakdown between Zuckerberg and Saverin.

With this performance, Timberlake shows that he actually can act, and pretty damn well. You almost — almost — forget who he is.

But the film, of course, really belongs to Eisenberg’s Zuckerberg.

According to Fincher and Sorkin, revenge. Revenge on that much–blogged–about ex–girlfriend, and on the exclusive Harvard clubs that wouldn’t let the nerdy Jewish boy join.

Facebook doesn’t impress the girl, and the preppy clubs still won’t let him in.

In the end, Zuckerberg is found sitting alone at a table. The negotiations are over; he has paid off his former friend.

It is a true anti-hero story.

It’s too bad the quick-speaking intelligent dialogue still can’t make up for the fact that Sorkin’s, but they are not as two–dimensional as the screen they’re on.