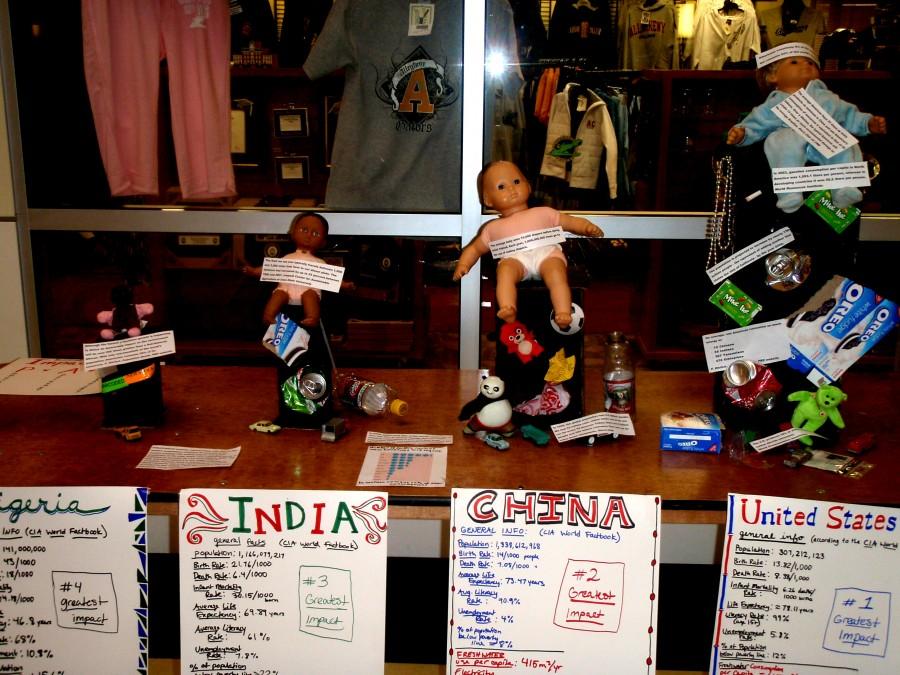 An Environmental Science project created by four students featuring painted-on baby dolls sparked a controversy in the midst of finals last semester, creating a dialogue about issues of race at Allegheny.

The project, which was displayed outside of Allegheny’s bookstore in mid-December, included baby dolls that increased in size based on the environmental impact of the country they represented. The doll representing Nigeria was painted with dark paint, the doll symbolizing India was painted with a lighter brown paint, and the dolls used to represent China and the U.S. were left with their original light-colored skin.

Although the environmental science group felt that their intentions were innocent, some students were offended by the display, including Rachel Cave,’10, president of the Advancement of Black Culture (ABC).

“I didn’t want to jump to conclusions right away and I didn’t want people to be up in arms,” Cave said. “We tried to figure out the goal [of the display],why the baby dolls were included, and why they chose to paint the baby dolls. I just started shaking my head; I was in disbelief and really confused. I didn’t understand the connection.”

Annie Krol, ’13, one of the creators of the project, said that the dolls were appropriate symbols for the project.

“We painted the dolls with colors to match certain skin colors, and included fact sheets that included information such as population, carbon footprints, and emissions totals,” Krol said. “We wanted to raise awareness about how the U.S. just has an incredibly huge carbon footprint.”

Kritika Kapadia, ’11, who worked with Krol on the project, said that the baby dolls were meant to represent overpopulation.

“Overpopulation is something Annie and I talk about,” said Kapadia. “Environmentalists have been finding out that the problem is not only overpopulation; it’s also about overconsumption. The U.S. uses tons of fossil fuel, and the dependency on things such as automobiles and meat consumption is one of the highest in the world. So that’s what kicked this off—we wanted an installation that displayed that.”

However, some students were not able to look past the dolls used to represent each country.

“I first saw the display on a Monday, right after an ABC meeting,” said Jessica McGrady, ’10, secretary of ABC. “A group of us stopped to look at it and everybody was so offended by it that we decided to post our responses that night. I was probably one of the most angry ones. I got so mad that I almost cried—I was that disgusted. They had taken these baby dolls and painted them; they were like baby dolls in blackface. It was messy and poorly done. I was appalled.”

ABC’s response consisted of a poster with typed, direct quotations of initial reactions felt by members of the organization.

“We figured it was the most responsible and productive way to make comments,” McGrady said.

“The most offensive part is just how they chose to represent a culture,” Cave said. “I didn’t understand why the baby dolls were necessary, and I thought they could have gotten their point across with flags or a different representation. The baby dolls gave a different connotation and I felt that they were not really inclusive to all the groups represented in those nations.”

The environmental science group was shocked that some students interpreted the project as racist.

“ABC saw the project as similar to minstreling, and we didn’t even think about that as an option,” Krol said. “We didn’t want a light-skinned doll representing India. And white people do represent upper-class America, who are more prone to expend environmental resources.”

Kapadia conceded that the project may have been confusing to passersby.

“Aside from ABC’s reaction, some people also thought that the point did not get across as clearly as we would have liked,” Kapadia said. “We should have made it more clear what the focus was. But we were glad to initiate discussion about it.”

Both Krol and Kapadia were appalled and hurt by the racist accusations.
“To be honest, we were a bit taken aback,” Kapadia said. “We were very upset about the poster that was put up, but we felt it was important to respond to the issue.”

Krol agreed. “We were both very hurt,” she said. “We figured that they hadn’t fully read the information below the babies. It was not about race; it was about a visual representation.”

Krol, Kapadia, and members of ABC met with Cherjanet Lenzy, director of Diversity Affairs, and Eric Pallant, professor of Environmental Science, to discuss the issue. There is a sense of resolution, but some misunderstanding still exists.

“I could understand where they were coming from,” Cave said. “I was still a little confused because I felt like they didn’t think about it deeply enough. And we would have liked to have the whole group at the discussion.”
Krol expressed similar emotions.

“I did understand their point of view, but I still disagree with some of it,” Krol said. “We deeply apologized for any sort of ignorant insult that we may have caused.”

“I can definitely put myself in their shoes,” Kapadia said. “In the past, I also have looked at something and thought it was misrepresented. Being on the other side gave me a different perspective because [when we created the project] there was nothing like that in my mind. Both sides wanted to hear each other out. At some level we were hurt by the statements on the poster and they were hurt by the project itself, but everything was brought into the light and it was resolved.”

Others feel that the situation has not been fully reconciled, and that one discussion is not enough to solve a recurring problem.

“I think there are still hurt feelings on both sides,” Cave said. “Some of our members didn’t feel like we had really reached across with our point. [The group members] were really hurt that we would accuse them of being racist and they were so caught up in proving that they were not racist that we weren’t really able to get our point across. I didn’t feel like we got to talk as much as we would have liked or really address the issues fully.”

“What it boils down to is that a lack of intent doesn’t equal a lack of racism,” said McGrady, who was not able to attend the discussion due to surgery. “I still hold to the feelings I had when I immediately saw it. Even though half of the group expressed remorse, it still bothers me that people could not think that it was not offensive. I hope that in the future, if people do a project that involves race, they stop and really think about what they’re saying, even subconsciously.”

Cave views this as a learning experience for Allegheny’s campus.

“I just hope that people will use this as an opportunity to be more willing to speak out about their reactions,” Cave said. “It shouldn’t just be up to ABC to respond to these types of situations. I would hope that students at an open campus like Allegheny, and not just people of color, would respond when they see something that they feel is offensive. Let your voice be heard.”

Krol and Kapadia are focused on clearing up misconceptions about their display.

“Kritika and I come from an understanding and an environmental standpoint, and we both consider ourselves really progressive,” Krol said. “The project was about environmental impact, and we come from a place of wanting to educate those who are unaware of our impact as a country and as a community. We deeply apologize for anyone we may have hurt. We hope that anyone offended can forgive us and that we can move on from here.”