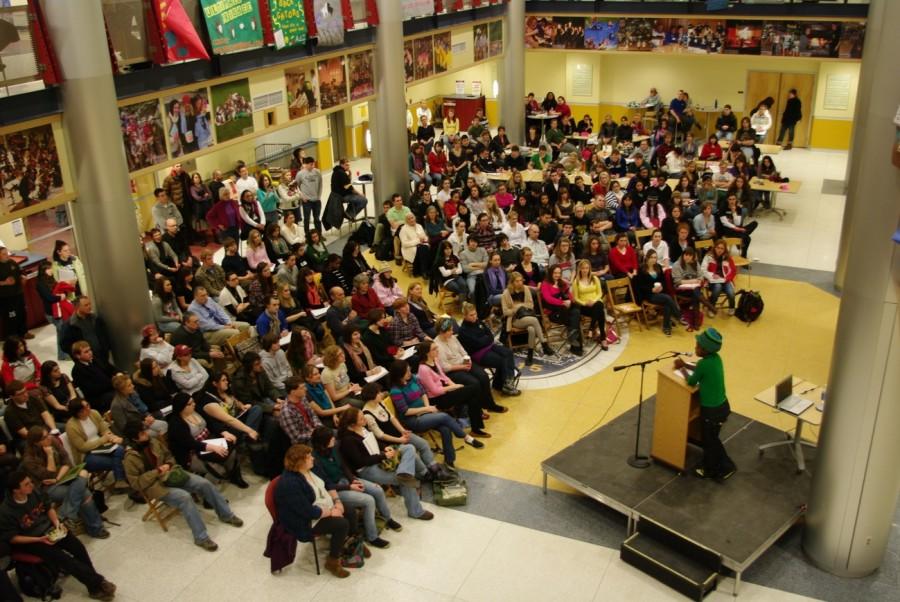 Some people collect coins. Others, baseball cards. South African artist Zanele Muholi, however, collects panties. Her “delicate” display was one of several aimed at challenging traditional social identities in the “In Between” art exhibit.

The Penelec, Megahan and Bowman Art Galleries featured the works of 17 artists, most of which caused visitors to question sexual, gender, racial and class norms.

Muholi’s panty display, “Insila Yomuntu,” was one particular exhibit that piqued the interest of many gallery visitors.

Muholi spoke to a crowded Campus Center lobby as she described her exhibit’s intentions and entertained questions. The artist explained that her panty collection was a unique way to make people aware of the hate crimes committed against black lesbians in South Africa.

The panties, Muholi explained, represent the victims of curative rape, or rape intended to “cure” South African women of lesbianism in her country. She offered the alarming statistic that every six minutes, a woman is raped in South Africa and, through her display, was adamant about making her cause known.

Muholi felt that this unique approach was an ideal way to champion her cause.

Muholi hopes that her ongoing project will encourage others to become aware of  not only her cause but difficulties in other countries such as Haiti. She hopes people can join forces to help alleviate these widespread international problems.

“People need to be conscious of what’s happening in other parts of the world,” Muholi said. “Although you won’t be an activist overnight, what you do with your pen and keyboard can make a difference.”

Although Muholi possesses 1,000 pairs of panties, she is about 99,000 short of her goal. When asked why she intends to collect so many, the artist explained it was part of her goal of reaching as many people as she can in her desire to raise awareness.

Students were encouraged to interact with her raw portrayal of sexual discrimination in her country by writing on the walls behind the panty display.

Students were equally impressed with and engaged in other artists’ work.
Rebecca Harrison, ’13, was particularly fascinated by Melissa Boyajian’s candid self–photograph and its blurred lines of gender.

“It was puzzling,” Harrison said. “My eyes first went to the face and I assumed it was a man because of the beard, but then my eyes shifted and I noticed the female contours.”

Harrison was equally affected by other “In Between artists.”
“The exhibit as a whole makes you think about how your sexuality plays into your personality,” she said.

This kind of abstract thinking was what Darren Miller, as the gallery director, was hoping to achieve through the exhibit. Miller, who knows most of the featured artists both personally and professionally, was excited to bring their work to Allegheny.

“Their work helps to explore gender and make it more complicated,” Miller said. “It seemed to fit well with the Year of Social Change.”

Other highlights from the exhibit include David John Attyah and S.A. Bachman’s projections in the Vukovich Center, respectively titled “Queer Youth Manifesto” and “Mind Control,” which can be seen through the building’s windows every day until the exhibit’s closing.

The exhibit will be on display until Feb. 16 and artist Muholi will remain on campus this week to visit classrooms and answer any additional questions.
The college art galleries are free to the public and are open Tuesday through Friday from 12:30 p.m. to 5 p.m., Saturday from 1:30 p.m. to 5 p.m. and Sunday from 2 p.m. to 4 p.m. For more information on “In Between” or upcoming exhibits, visit the gallery Web site at http://www.allegheny.edu/artgalleries.