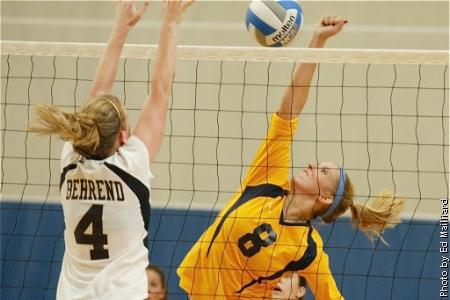 Here is a caption. SPORTS INFORMATION

The women’s volleyball team competed in the NCAC Power Weekend in Hiram, Ohio, this past weekend with a .500 win percentage by defeating Ohio Wesleyan and Denison while falling to Kenyon and nationally ranked Wittenberg.

The Gators began the weekend with a 3-1 victory over Ohio Wesleyan. The match proved to be one of their best statistically, with Jordan Leopold, ’11, posting a double-double and Maddie Hudac, ’14, posting over 50 assists for the fourth match this season with 52. Outside hitter Audra Batdorff, ’12, added a season-high 23 kills for the team.

“I feel like I performed well, but that was only with the help of my teammates,” said Batdorff. “Every kill I received was due to an amazing pass which lead to a great set and all three hitters coming in loud.”

The team performed best not only statistically but mentally as well against Ohio Wesleyan this weekend, Leopold explained.

“We dropped the third game but then played in the fourth with an intensity that I hadn’t yet seen this season,” she said.

Despite the efforts of the team as a whole, their season hasn’t been easy.

“The upperclassmen really have a desire to win and our biggest weakness is that the younger players haven’t developed that mentality yet. I think that our freshmen still aren’t accustomed to the heavy demands of being a student-athlete and it’s showing during our long weekends away,” Leopold said.

In their 3-0 loss to Kenyon, the Gators were unable to take a single set. Leopold fell one dig short of achieving her second consecutive double-double. Saige Foster, ’14, had four blocks in the match.

Coach Bridget Sheehan expressed disappointment in the performance during the Kenyon match.

“We really didn’t get our game together enough,” she said.

Leopold credited the loss to the level of force that was not shown in the match.

“The problem came when some of the players didn’t carry that same intensity [from the Ohio Wesleyan match] over to our last match against Kenyon, and they definitely capitalized on our complacency,” she said.

Coach Sheehan acknowledges that they must improve on various aspects of the team’s game as a whole, such as consistency and mental toughness.

“We need to get our game down better than we had it as we go deeper into our schedule against teams like Wooster and Oberlin that we have not played yet,” she said.

The younger players also recognize the importance of their role in the team’s success and their need for improvement.

“For the future our team needs to work on being consistent and just playing our best game all the time. We are so talented, and we need to bring that talent 100% every time we step on the court,” said freshman Hudac.

The team faces off against Ohio Wesleyan again this upcoming Saturday at 1 p.m. in the Wise Center.