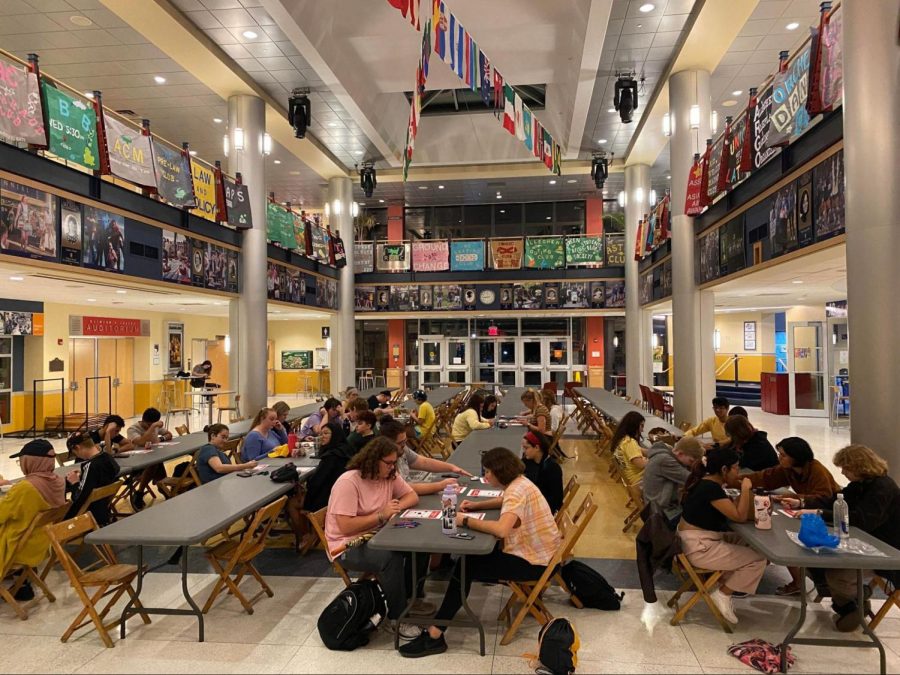 Rows of tables stretched the length of the Henderson Campus Center on Friday, Sept. 16, for the Resource Fair Bingo Night. The table on stage was stacked high with Allegheny merchandise, drawing students in and creating a competitive but friendly atmosphere. Prizes included, but were not limited to, a Chompers plushy, an umbrella, banners, hats and gift cards to the Merriman Bookstore. After a brief scramble to find enough bingo boards for each student to have one, the event began.

This was no normal bingo, however; instead of a number being read aloud, Amy Stearns, second-year class dean, read a blurb of a specific resource available to students on campus, and players had to correctly identify what resource on their bingo boards corresponded to the description.

The incorporation of educational material with a fun activity was intentional.

“We wanted to do something that would help students understand the wealth of resources here at Allegheny, but in a way that’s more engaging than somebody standing up and going through a PowerPoint,” Stearns said.

“A lot of times, folks find out on a one-on-one basis that there are these services,” Fjeldal said. “So this is a way of putting it out there for everyone, making it fun while also learning.”

The inspiration for hosting the Resource Fair Bingo Night stemmed from a trend of students not utilizing all the resources available to them on campus.

“During orientation you’re trying to take a sip from a fire house, and it’s just very hard to retain the information that you get,” Stearns said.

Notably, the event was not directed only at first-years.

“It’s an event for all students, because you never know what resources you’re going to need and when,” Fjeldal said.

Students had lots of positive feedback about the effectiveness of the event format.

“I’m not very well-educated and up-to-date with a lot of this stuff,” said Emily Adams, ’25. “I feel like it’s easier to learn stuff when it’s paired with something interesting or fun.”

Kaleialoha Froning, ’24, a transfer student new to campus, said, “It definitely tested and reinforced some of the knowledge that I learned during Orientation Week. There were a couple of things I saw on my bingo sheet that I looked up so that I could learn more about them.”

For some students, the Bingo Night served as a way to reinforce everything they already knew.

“Being a second-year I already kind of know what the resources are, but it was interesting to see how much overlap there was between them,” Blake Vowler, ’25, said.

Allison Burnheimer, ’26, said that Orientation Week had already educated her about the campus resources, so she “was more here for the prizes and hanging out with friends.”

The class deans were enthusiastic about the resources available to students on campus.

“I think our students often don’t remember that Winslow Health Center is right on campus and can help you,” Fjeldal said. “Residence Life is another good resource that we don’t always think about.”

“I think the Career Education Center is really important for students to establish a connection with,” Stearns said. “I would also highlight the Speaking and Writing Consultants; they’re trained peers that know what they’re doing and can really help students level up their writing and their speaking. I’ve heard really good things about the support they provide.”

The Resource Fair Bingo Night lasted approximately an hour and a half, with around ten students claiming a prize.

The very last prize was a $50 gift card to the bookstore. After fifteen minutes of playing the same round trying to get four-corners on the bingo boards, tensions were running high. Conferring about what the hold-up was, students quickly realized that most of them needed the same box to win. As soon as Stearns began reading the last resource’s description, over twenty students jumped up to yell “Bingo!”

What followed was the best tie-breaking strategy the organizers could come up with: a huge, multi-round rock-paper-scissors tournament. Cheers for friends and cries of anguish brought the Resource Fair Bingo Night to a gradual end, with the winner of the closing tournament taking home the $50 gift card, plus a $20 gift card they had won earlier in the evening.

As students trickled out of the Henderson Campus Center, Andrew Germann, ’26, said, “This bingo night was a great way to integrate people into campus better.”

Overall, the students present enjoyed the event and appreciated the opportunity to learn more about campus resources.