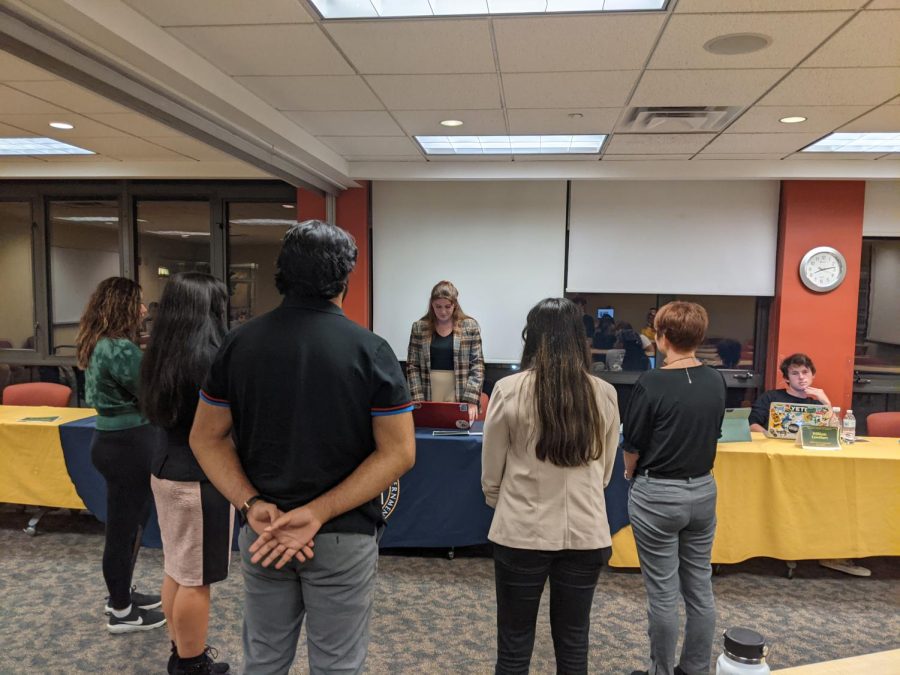 ASG President Veronica Green, ’23, swears in five new members of the cabinet at the close of the weekly ASG General Assembly on Tuesday, Sept. 6. The apponts are, from left to right: Director of Treasury Adriana Solis, ’23, Director of Sustainability Haley Hersh, ’23, Chief of Staff Ray Colabowalla, ’25, Parliamentarian Ankitha Pamula, ’24, and Director of Organizational Development Kori Bower, ’23.

At its weekly General Assembly on Tuesday, the Allegheny Student Government welcomed two new senators and approved five new cabinet members, in addition to approving two new clubs for their first round of voting and passing two amendments to the ASG Constitution.
Last week, ASG convened with just seven of its fifteen active seats filled, with five senators from the class of 2025 as well as one senator each from the classes of 2024 and 2023. This week, the classes of 2024 and 2023 added one senator each, bringing the total number of senators to nine. Jasmin Meyer Jaafari, ’23, was appointed by Class President Shira Haus, ’23, and London Dejarnette, ’24, was appointed by Class President Juliana James, ’24.
Following the approval of the previous week’s minutes, ASG President Veronica Green, ’23, swore Jaafari and Dejarnette in as senators for their respective classes, now leaving only three seats open for each class’s senate. The senate will expand to include the class of 2026 following first-year senate elections on Sept. 13-15.
The Senate approved five nominees to key cabinet positions, filling gaps left when some of the current administration’s nominees were voted down in the final GA of last academic year.
Ankitha Pamula, ’24, was unanimously approved for the position of Parliamentarian, the office that advises ASG on proper parliamentary procedure.
Ray Collabowalla, ’25, Haley Hersh, ’23, and Kori Bower, ’23, received all votes except one, with Senator Anh Nguyen, ’25, abstaining on those three confirmations. Collabowalla will be the Chief of Staff, Hersh will be Director of Sustainability and Environmental Affairs, and Bower will be the Director of Organizational Development.
Adriana Solis, ’23, was confirmed as Director of Treasury by a 7-2 margin, with Nguyen and Senator Nicole Recio Bremer, ’25, voting against the appointment.
All five new cabinet members were sworn in at the close of the meeting.
In “New Business,” ASG approved a pair of clubs for their first round of voting. According to a representative present at the meeting, the new “Health and Wellness Club” aims to, “motivate and educate individuals on the importance of mental and physical wellbeing.”
The body also heard from Senator Sofia Hassan, ’25, who represented the Allegheny “DMAX” club.
“With DMAX at Allegheny, we want to destigmatize conversations around mental health,” Hassan told ASG during the meeting. “We’d be meeting about every week, just getting together as a community of students and talking about how we’re doing.”
The Health and Wellness Club received unanimous support, while DMAX received every vote save for Hassan’s, who abstained. Both clubs will be up for a vote again at the next GA. If they are approved a second time, they will be considered ASG-recognized clubs and eligible to apply for ASG funding.
Funding requests for the week totalled $785. Green, speaking as the Director of Treasury prior to Solis’ confirmation and swearing-in, said that Skate Club had requested $380 from the surplus fund and $120 from the general fund, and the Association for Asian and Asian-American Awareness had requested $285 from the Culture, Identity and Leadership Coalition fund.
The body also approved two amendments to the ASG Constitution in the second round of voting for the changes. One amendment concerned regulations for how ASG President and Vice-President-elects still sitting in the Senate can vote on their own nominees, while the other granted the Senate the ability to revive failed motions made by ASG in previous years.
The first amendment — dubbed “Amendment 22-02/3” — comes after questions were raised in the final GA of last year as to whether Green and Vice-President Rudra Schultz-Ray, ’23, then sitting Senators, should be allowed to vote for their own nominees to cabinet positions. The new amendment allows the President and Vice-President-elects to vote on nominees, while also providing an option for another senator to request a proxy vote in their place. That proxy would be selected by other Senators of the same class and would have to come from the same class as the officer-elect.
The second amendment — “Amendment 22-01” — allows the Senate to re-try any failed motions made by previous iterations of ASG, though failed motions from the same academic year cannot be retried.
The next GA will be held next Tuesday, September 11, at 7:30 p.m. in CC 301/302.