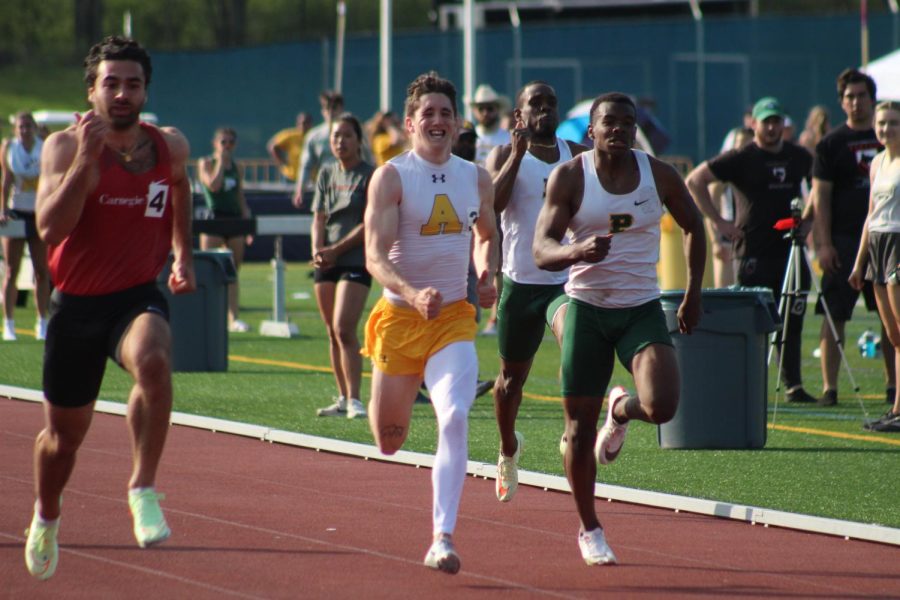 Tylir Shannon, ’22, sprints the final stretch of the men’s 200 meter race at the Marty Goldberg Invitational at Robertson Athletic Complex on Thursday, May 12. Shannon finished third in 22.49 seconds.

The Allegheny Men’s Track and Field team brought home the gold with three titles in the NCAC Conference Championships this past week, finishing with a team score of 76 points, good for sixth place in the event.
One of the most thrilling stories of championship week was seeing Jacob Boord, ’25, back in the pit. After going down with a high ankle injury while competing in the Bucknell Bison Invitational April 15th and 16th, Boord was expected to miss six to 12 weeks of action, and was likely to miss the remainder of the season.
Working with the Allegheny College trainers as well as his sports psychologist, he nursed the sprain back to health in three weeks, and finished in first place for the javelin throw with a distance of 53.09, defending his title now in back-to-back years, proving he is the best in the conference.
“Given everything that’s transpired within the last couple of weeks, it was really refreshing to go out and compete again,” Boord said.
Boord expressed the frustrations he encountered during the event, claiming that although he won, his throws were not up to his distance standards. During the Bucknell Bison Invitational, he broke the school record with a throw of 62.58, edging out the previous throw that was held for almost three decades from Warren Phillips in 1996.
Though it was not a perfect weekend in the eyes of Boord, he still has three more tournaments to go out and leave his mark. He is also currently ranked as the seventh best thrower in the nation for the javelin, and is a favorite to compete well in the National Championship at the end of the year.
“Come nationals, if I’m fully healthy, I can do some damage and get on the podium,” Boord said.
In addition to Boord’s title, Tylir Shannon, ’22, also earned two pieces of hardware as he led the Gators in the 4×100 meter relay and in the individual 200 meter dash. He set the second fastest time in school history during the 200, crossing the line with a time of 21.68. He also earned second place in the 100 meter dash, as his impact was felt on the track after competing well in multiple events during the two day stretch.
“I had to go execute,” Shannon said. “It’s really cool to see out of anyone that’s ever ran track here that it’s the second fastest time.”
It has been a goal of Shannon’s to hit the 21 second mark all season. With his previous best time coming at 22.17, his hard work paid off as he checkmarked that task during the preliminary round on Wednesday, then beating his time in the final to win the gold.
The Gators have been put in good hands with head coach Justin Linzy. Linzy was a two sport athlete at Ohio Northern University, where he ran in the National Championship during the 2009 season and brought a conference title to the school in the outdoor championship. He knows what it takes to win, and pushes his team while training to get the best out of them.
“I know that if I put my trust in him, he will lead me in the right direction,” Shannon said.