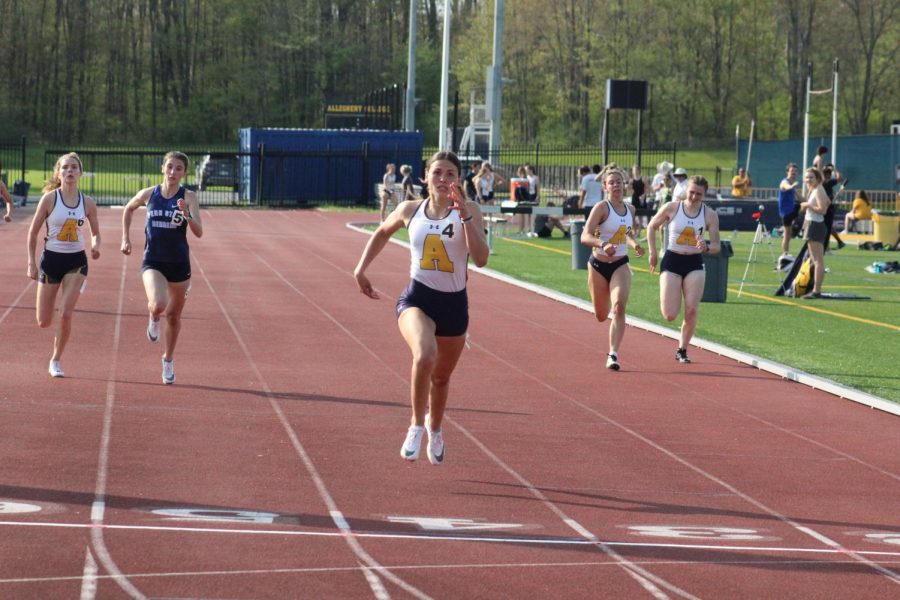 Mihaela Toader, '23, crosses the finish line during the women's 200 meter race during the Marty Goldberg Invitational at Robertson Athletic Complex, Thursday, May 13. Toader won the race in 25.62 seconds.

In what will be her final year in the North Coast Athletic Conference, Mihaela Toader, ’23, left her mark once again, as she won the conference title for the Gators in the 400 meter race, while also placing second and breaking the school record in the 200 meter race this past weekend.
“I really wanted that 400 win,” Toader said. “There is definitely a huge mental component to that race because you’re coming down that last 100 meters and it hurts, it’s hard, and I think it really just comes down to who wants it the most.”
After finishing in second place during the preliminary rounds for the 400, Toader put her foot on the gas, and kicked her legs into high gear for Championship Thursday. Beating her Wednesday score by over a second, Toader crossed the line with a time of 58.32 to win the title — her time is also the second fastest in Allegheny school history.
During the 200 meter, she arguably performed better than in the 400, breaking the school record in the preliminary round with a time of 25.53, a record that has been held by Becky Rittenhouse, for almost two decades, when she broke the record in 2003 with a time of 25.80. The next day, Toader bested her own time in the finals, breaking the record again and earning a podium position with a time of 25.48. Although she earned second in the finals of the 200, it was a phenomenal weekend with positive results to reflect on moving forward.
“I actually hadn’t even looked at the school record,” Toader said. “Didn’t even know (I broke it) until the next morning. It put me in a good head space and I was ready to get it done for the second day.”
In addition to her already impressive resume, Toader also competed in the triple jump and placed fifth, while also finishing fourth in the 4×400 and 4×100 team relay.
Toader has led the Gators in multiple facets of the game this season. After being named captain in her sophomore year, she took that role to heart, putting in two to three practices a day and setting an example for the rest of the team on what it takes to be a champion. Moving into her junior campaign, she shined brighter than a diamond as she was a top performer in numerous events throughout the season. She earned her teammates respect and proved her worth for the blue and gold.
“She played a huge role,’’ said Julietta Schworm, ’24, who ran with Toader in the 4×400. “I know a lot of people on the team, including myself, look up to her and her work ethic.”
Closing out the season, Toader will have a chance to compete for a spot in the National Championship, pending her performance in the North Central Qualifier taking place May 17 in Naperville, Illinois. With rigorous competition ahead, she will have to rank within the top 22 across the country in either event to make it. Having conversations with head coach Justin Linzy, and after performing exceptionally well in both events last weekend, Toader is now debating on whether to compete in the 200 or 400, and will make her decision in the near future. As of now, she is leaning towards the 200.
“My goal was always to make it to Nationals and score,” Toader said. “It would be awesome to go to nationals, and I’m ready to get it.”
As the year comes to a close, Toader has already made plans to continue her hard work into the offseason. She will be working with one of her former coaches at Mount Lebanon High School, who was a decathlon athlete in college and grad school, and is very knowledgeable about sprinting. Both parties are excited to get to work, and once Toader returns to Pittsburgh she will immediately be back to the grind.