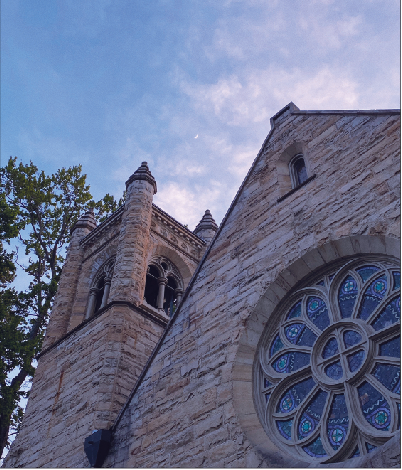 Ford Chapel has been the center of religious life on campus for over 100 years.

For almost 200 years, Allegheny has been affiliated with the United Methodist Church. Now, with fractures in the church and the Allegheny community’s approach toward religion, the college will play host to a symposium on Methodist affiliation in March of 2023.
“This is a project we started talking about in 2020 when someone reached out to us about this grant,” said Jane Ellen Nickell, Chaplain Emerita and project director. “It was encouraging colleges to look at what they were founded to do and what they are doing now, and it seemed really timely.”
The college’s Methodist affiliation garnered criticism from the campus community following the church’s controversial 2019 “Traditional Plan” that placed penalties on openly queer clergy members and clergy members who agreed to perform same-sex marriages. Faculty and students lobbied for the Board of Trustees to officially disaffiliate the college from the United Methodist Church. Currently, Allegheny’s affiliation is suspended — the college is not accepting any funding from the church — until the church revokes this legislation and becomes more supportive of the LGBTQ community.
“There has been an uneasy relationship [with the church] as the college has become more progressive [and] more secular,” Nickell said.
Rather than being a forum for debate on whether or not the college should remain affiliated with the United Methodist Church, the symposium is meant to be a scholarly conversation that encapsulates a variety of approaches to affiliation and disaffiliation.
“The symposium is a scholarly examination, via historical frames, of the relationship between the United Methodist Church and Allegheny College,” Dara Delgado, Assistant Professor of Religious Studies and member of the symposium’s review team wrote in an email to The Campus.
As a member of the review committee, Delgado will be working with other members, both faculty and Methodist clergy, to select research proposals to be developed, funded and presented at the symposium.
“I am a scholar whose research interests and expertise are in American religious history,” Delgado wrote. “As such, my role in this current work is academic and wholly restricted to a scholarly religio-historical perspective.”
Nickell hopes that the symposium will prove to be a useful platform for students to examine the college’s Methodist affiliation while also getting experience in having scholarly work presented and eventually published.
“With the grant money, we’ve been able to pay a stipend to anyone who’s selected to write a paper, so there would be compensation,” Nickell said. “It is going to be a reviewed presentation. For students who are thinking about academic careers, to be able to present at an academic symposium and to have their paper published is a nice thing to be able to put on your resume.”
Charlie Waid, ’25, is helping Nickell research the history of Allegheny’s Methodist affiliation for the symposium.
“I’ve always been interested in religious studies,” Waid said. “This being my first year of college, I wanted to dive into how to do research properly and be able to work with people on campus and make connections that way.”
After writers are notified of their research proposal’s acceptance on Aug. 1, 2022, they will then have until Jan. 31, 2023, to write a paper for the March 2023 symposium. The event itself is modeled after a 1991 symposium on Church-College Relations that took place at Allegheny. The 1991 symposium focused more broadly on all church-college relations rather than Allegheny’s specific affiliation but followed a similar path of scholarship.
The symposium will feature two or three keynote speakers who, according to Nickell, will be picked based on the paper topics that are accepted and will be presented at the symposium. Following the end of the symposium, the papers will be edited and published together in a volume that will be used to document contemporary thought and scholarship on Allegheny’s Methodist affiliation.
All are invited to propose a scholarly paper surrounding Allegheny’s Methodist affiliation for the “Meeting the Moment” symposium. The deadline for research proposals is June 30, and those accepted will be notified by Aug. 1. For prompt ideas and instructions on how to submit a research proposal, visit www.allegheny.edu/meetingthismoment.