“A bump in the road” 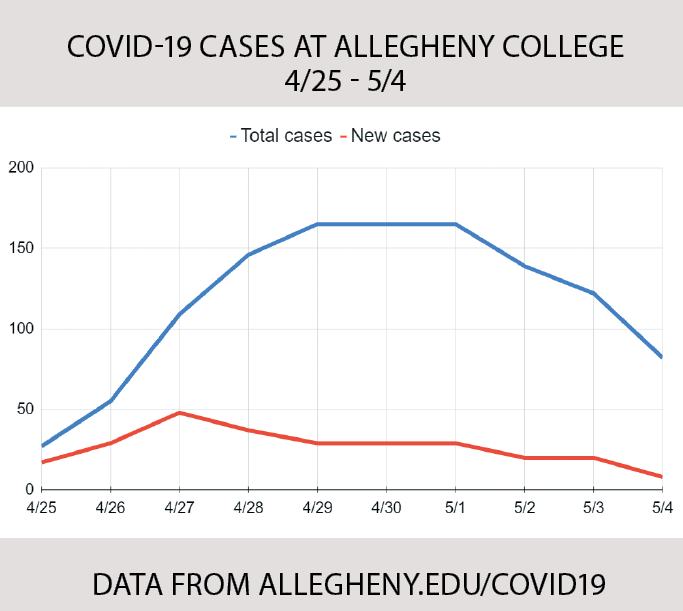 Less than a week after the highest COVID-19 case count on campus since the beginning of the pandemic, the Allegheny College Health Agency has once again loosened masking requirements on campus. The most recent mask mandate was put in place after more than 100 students tested positive between Monday, April 25, and Wednesday, April 27. The mandate expired on Wednesday, May 4, as announced by Gabrielle Morrow in an email to the campus community that day.
“Given the downslope in cases, the mask mandate will expire today at 5 p.m.,” Morrow wrote. “Those who would like to keep masking are encouraged to do so.”
Morrow’s email struck a positive tone; the subject line was “What a stellar community!” and congratulated students for stopping the spread of the virus.
“You have turned the recent uptick in cases into a bump in the road,” Morrow wrote. “Look at our numbers — rephrase — look at YOUR numbers.”
The numbers Morrow provided were a far cry from the peak of the outbreak a week ago. On Wednesday, April 27, 48 students tested positive; a week later, on Wednesday, May 4, 8 tested positive.
The number of active cases has also dropped; Wednesday, May 4 saw 82 active cases stood at half of the Friday, April 29, peak of 165 students.
“I think they did a really good job handling it, compared to the amount of cases we had last week,” Ethan Nychae, ’25 said. “It’s looking pretty good right now.”
Nychae was not unique in his positive attitude. Joel Pszczolkowski, ’24, thought that the amount of information being shared was enough to keep students informed.
“I think the emails are informative enough for what we need to know about COVID on campus,” Pszczolkowski said. “I don’t think they’re hiding anything from us”
One common agreement though: masks should be mandated for the rest of the semester. Pszczolkowski thought that given there are still cases on campus, it would be a good idea.

“I think we should just wear masks till the end of the semester,” Pszczolkowski said. “I just think it’s beneficial for everybody.”
Becca Winton, ’23, considered ACHA’s decision not to extend the mask mandate “silly.”
“We’re in the middle of a pandemic,” Winton said. “Just because cases have gone down doesn’t mean that COVID has left our campus.”
Desmond Corrado, ’25, also thought that it was better to be safe than prematurely celebratory.
“It sucks in the short term, but it’s pretty important in stopping the long-term spread,” Corrado said. “We shouldn’t call victory before we’re absolutely sure.”
However, Corrado, who had just exited quarantine, called his experience there “confusing,” and said that while transparency was comforting, it felt sporadic. He pointed to gaps in the email updates sent by ACHA; no updates were sent Thursday, April 28, over the weekend — April 30 – May 1 — or on Tuesday, May 3.
Winton also thought that ACHA was not responsive to student concerns about their safety.
“They are trying really hard to have a narrative of ‘everything is fine, don’t worry,’ and belittling students who have concerns,” Winton said. “Their dashboard is purposefully confusing so that we don’t have access to info, and they don’t communicate their reasoning and thought processes with students.”
ACHA declined to comment to The Campus, saying that no members of the agency were available for comment. The agency has not given an interview to The Campus despite dozens of requests for comment since its establishment in 2020, and often does not reply to requests for comment at all.