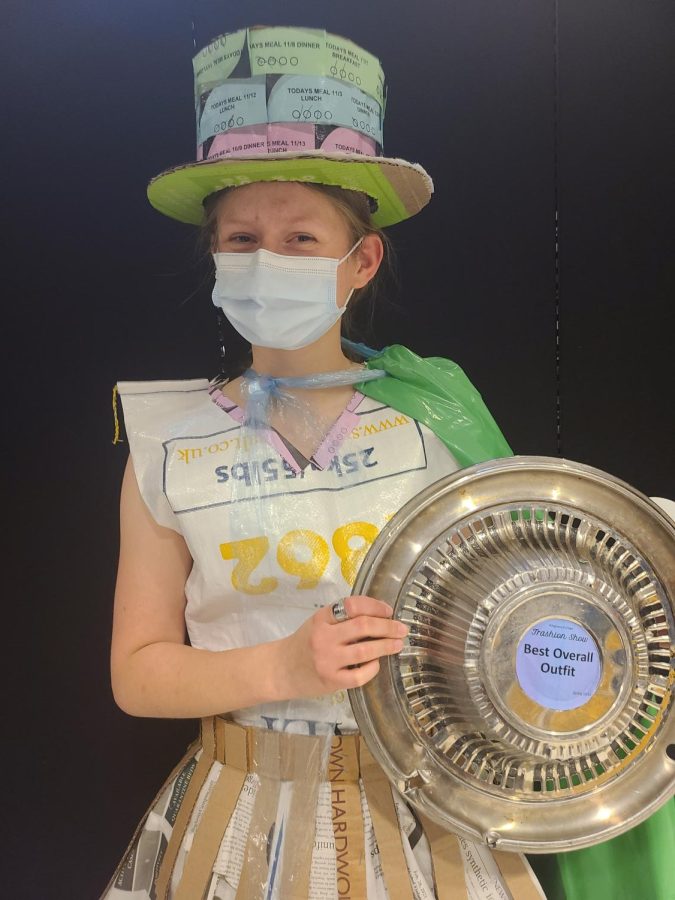 Elsa Waidelich, ’25, won “Best Overall Outfit” with her dress made out of recycled copies of The Campus.

The fashion industry has become more wasteful than ever before with the continued growth of fast fashion. According to Waste.org, 92 million tons of clothes-related waste is created each year, which produces half a million tons of microplastics. Microplastics are small pieces of plastic debris that come from consumer products and industrial waste, according to the Oxford Dictionary.
To raise awareness for this growing problem, Students for Environmental Action hosted their annual “Trashion Show” on April 21 in the Henderson Campus Center. The Trashion Show is a fashion show where students make outfits out of trash and model them.
President of Students for Environmental Action Ashlynn Peachey, ’23, explained that this was the first time the Trashion Show was brought back since the spring 2020 semester.
“This year, we were kind of starting from scratch,” Peachey said. “We have a few seniors in the club, but they had not attended the show before. So, in January, we decided on a date, and last month, we started to reach out to as many people as possible and figure out what needs to happen.”
During the Trashion Show, each club that participated had a member model the outfit on the runway. The clubs present were Bike Share, Allegheny Socialists and Green Students of Color. Many of the outfits featured trash that can be found around campus such as chip bags, newspapers and gum wrappers.
Trashion Show winner Elsa Waidelich, ’25, shared her experience with modeling and creating her outfit, which was made out of recycled copies of The Campus.
“We had a lot of newspapers lying around, so using them was practical,” Waidelich said. “With modeling, it was kind of scary … That’s usually not the side of this that I’m more int

erested in, like the crafting of the project.”
Students for Environmental Action Vice President Olivia Monroe, ’25, remarked that part of the purpose of the event was to support and promote sustainable fashion habits.
“We did it to bring awareness to alternative sustainable fashion because the fast fashion industry is one of the worst contributors of climate change,” Monroe said. “I think the idea of the Trashion Show is to take something that would have been thrown out and gone to a landfill otherwise but make it sustainable and wearable.”
According to Peachey, the show is meant to be a creative way to raise awareness about the waste of the fast fashion industry, but the club recognizes that not everyone is able to shop sustainably. The way a Trashion Show brings awareness is by being an event that draws attention which results in more types of people knowing about climate change and the factors that contribute to it.
“I love thrifting and so I will always recommend it but I also want to acknowledge that buying clothing and stuff is a place of privilege,” Peachey said. “Sometimes people buy clothing in online stores because it’s cheap and we are college students. I don’t want to say only buy from sustainable brands because not everyone can do that.”
With fast fashion growing in popularity, it is expected to reach $252 billion in market size by 2027, according to Global News Wire. As a result, the global emissions from industry will rise too.
Students for Environmental Action External Activism Director Julia Sonen, ’24, hopes students will realize how much waste gets produced and reflect one how quickly outfits have been getting tossed.
“My outfit was made out of chip bags that were easily collected from two friends in two days because we just went through that many,” Sonen said. “It could have gone to a landfill but there was enough to physically cover my body.”
The environmental groups on campus plan to continue hosting events that will bring more attention to sustainability.
“There are a lot of smaller impactful events than the Trashion show but I think combining both types of events will result in a good range of people who will listen to the cause,” Peachey said.