In remembrance of Henry Tippie 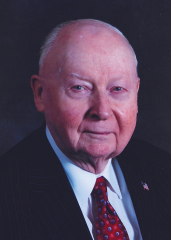 Allegheny College notified the campus community of the passing of Henry B. Tippie, husband of Allegheny Trustee Emerita Patricia Bush Tippie, ’56, on Feb. 24.
Tippie, a businessman and philanthropist, invested time and resources in many organizations and institutions across the United States. According to his obituary, Tippie was first employed as an accountant in his home state of Iowa after serving in the Army Air Force during World War II.
“(Tippie) did not come from wealth,” Vice President for Development and Alumni Affairs Matthew Stinson said. “He was a roll-up-your-sleeves, get-your-hands-dirty, live-on-the-Iowa-farms kind of guy.”
As he grew his career, Tippie became a Certified Public Accountant and spent time working in high-up positions with various organizations, including NASCAR sanctioned motorsports event promoter Dover Motorsports, throughout the southern and eastern continental U.S., according to his obituary.
Still, Stinson said that throughout his life, Tippie referred to himself as “An Iowa Farm Boy On Detour,” which is the title of his book.
According to Stinson, the Tippies have been Allegheny’s largest donors for many decades and through multiple presidents.
“Mrs. Tippie loves to tell the story that her first gift to the college was $5,” Stinson said. “The college has a great number of endowments that (the Tippies) created benefiting students, programs, faculty, facilities. Because those are endowed funds, that support will go on in perpetuity.”
According to Stinson, Susan F. Black-Keim was the major gifts officer that originally reconnected Patricia Tippie back to the college after her graduation. Stinson cited this connection as the Tippie’s point-of-entry so to speak.
The generosity of the Tippie family has taken many different forms throughout Allegheny College. Their donations have created many opportunities for students and faculty members for whom Allegheny was previously financially impossible.
Their mark has also been left on buildings across campus, the most notable being the renovation of Cochran Hall in 2005, which now houses the Patricia Bush Tippie Alumni Center. The Tippie family were also large contributors to projects such as the renovation of Bentley Hall and the establishment of the Richard J. Cook & Teresa M. Lahti Student-Faculty Research Fund, according to a press release by Allegheny College.
Stinson referred back to Tippie’s book, stating that Tippie had a strong and ongoing philosophy to pay back for benefits he had received.
“(Tippie’s) whole life, after creating wealth, was strategically paying it forward, repaying for benefits received, again Allegheny is one of those places,” Stinson said. “He exemplifies everything about the greatest generation. His service to his country, his work ethic, his family, his faith — a remarkable individual.”
Stinson will visit the Tippie family over the weekend of March 11 for Tippie’s memorial service in Austin, Texas.