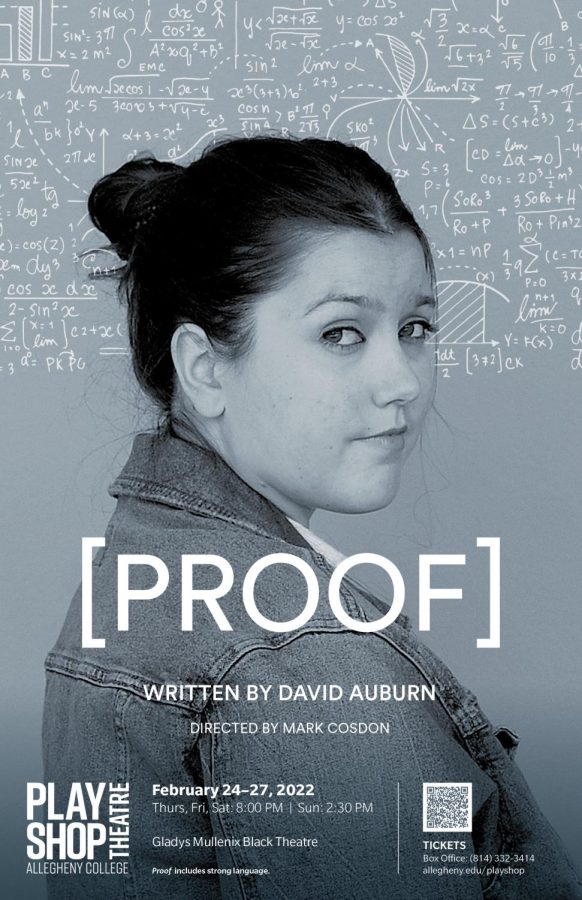 The Playshop Theatre is putting on a production of the Pulitzer Prize winning play “Proof” by David Auburn in the Gladys Mullenix Black theater, running from Thursday, Feb. 24 to Sunday, Feb. 27.
“‘Proof’ is about a brilliant University of Chicago mathematician, who regrettably succumbed to what almost certainly was schizophrenia,” said Mark Cosdon, director of ‘Proof’ and professor of theatre and performance studies. “He has a pair of daughters who must grapple with the legacy of his illness, but also with the legacy of his brilliant gifts.The play focuses upon the flourishing relationship of his daughter Catherine has both a creator of brilliant mathematical proofs, but also as a young woman coming into her own it’s a wonderful play, and one that I think is really very complex and moving.”
The play features a small cast of characters. Karen Gauriloff ’22, plays the central figure of Catherine, a young woman with a brilliant mind for mathematics who takes after her father, Robert, played by Professor of Mathematics Jim Hollerman. Robert is a mathematical mastermind who was famous at the local chicago university for solving complicated mathematical proofs, who also suffered from mental illness. Robert has another daughter, Catherine’s older sister, Claire, played by McKenzie DeWolf, ’24. Finally, Matt Dugan, ’23, plays Hal, a former student of Robert and a love interest for Catherine.
Besides the director and cast the scenic and lighting design is put together by Professor of Communication Arts Michael Meheler, the technical director is LeeAnn Yeckley, and the costumes were put together by alex martin, ’24.
The story follows Catherine in the wake of her father’s death, as she spent a lot of time with Robert and cared for him as his mental health deteriorated. Catherine has the same affinity for mathematics as her father, but also shows signs of struggling with the same mental health issues, unlike the very normal Claire.
The production also doubles as Gauriloff’s senior project.
“In terms of this being my comp I have put way more research and way more thought … into this character than I have ever done for a character before,” Gauriloff said.
“Having this performance be my comp has definitely made things different,” Gauriloff said. “I did so much prep work; reading and rereading the script and pulling out all the little details that make Catherine who she is. This will definitely be the most unified character I have ever performed. I’m using the Adler method of acting for my performance which has a lot of focus on creating the world of the play, what happened before this moment and what happens after.”
Gauriloff is referencing the techniques developed by 20th Century actress Stella Adler. The Adler method or Adler technique instructs performers to look beyond the interpretation of a director or the limits of what happens in the plot, encouraging them to use their imagination to a greater capacity in their performances.
“This means that I’ve basically created an entire imaginary life for Catherine and I’m using it as a starting place for my acting,” Gauriloff said.
The play itself runs just under two hours, and is only two acts, with the entire play taking place on the back porch of the family’s house over two acts. The rehearsal process began in module 1 and continued into the first week of module 2 with the module 1 break also being a break for the production.
The Playshop Theatre’s final show of its 91st Season will be “She Kills Monsters” by Qui Nguyen. The show follows a young woman named Agnes as she goes on a Dungeons & Dragons quest to make sense of the death of her little sister, Tilly, according to the last page of the “Proof” Program.”She Kills Monsters” will be running from April 28 to May 1, 2022.
“Proof” will be shown in the Gladys Mullenix Black Theatre in the Vukovich Center for Communication Arts tonight and Saturday night at 8:00 p.m. The Sunday showing will be at 2:30 p.m. Masks are required for entry.
Masks will required for all audience members regardless of vaccination status.