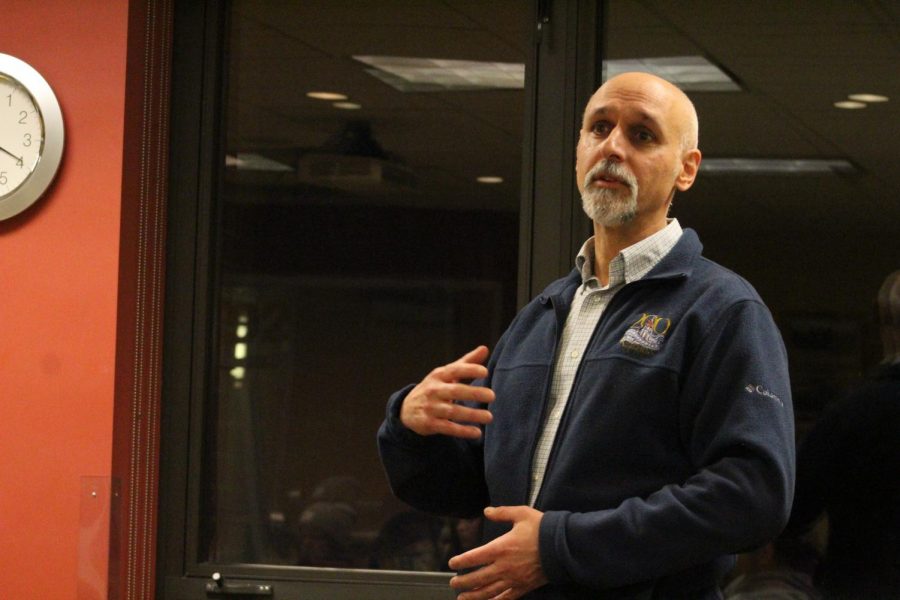 Provost and Dean of the College Ron Cole '87 speaks to students during the Allegheny Student Government General Assembly on Tuesday, Dec. 7.

Provost and Dean of the College Ron Cole, ’87, was the featured speaker for the final Allegheny Student Government General Assembly on Tuesday, Dec. 7, though he did more listening than speaking. Cole attended the meeting to receive feedback from the student body on the report of the Academic Program Review Task Force, a team of faculty members charged with reviewing Allegheny College’s academic programs and advising the provost on where the college can best allocate resources.

“I know myself along with a lot of students were nervous about this task force report coming out,” Senator Veronica Green, ’23, said. “I was really shocked — in a good way — by the report, and I wanted to say that I really agree with some of the sustainability initiatives and the reconfiguring of Reis Hall as an interdisciplinary center.”

Green’s feedback kicked off a night of constructive feedback, a far cry from a more contentious meeting with Link and her cabinet on November 16 and a student protest against the Task Force on Oct. 21. ASG Vice President Sophie Adams, ’22, clarified that Cole was there to listen in her introduction.

“He will be able to take feedback,” Adams said. “This is not going to be a casual question-and-answer; he did not write the report so don’t attack him, please.”

The task force’s report classified some academic programs into three mutually inclusive categories. The first category is programs that need strategic investment: programs that have been identified by the Task Force as needing additional faculty members and resources in order to bolster the program. The second group is programs that need reconfiguration: these programs are recommended to be split up or somehow adjusted. The third category included programs with “challenges for sustainability;” the Task Force “(suggests) options for these programs to adapt to the changing academic landscape, but the status quo is not sustainable.” A fourth category of programs to be “maintained” was created for programs not included in the first three groups that the report does not recommend action at this time.

The third category of programs that face challenges for sustainability, received the most attention throughout the night. For example, in the same comment that she noted her positive response to the report, Green pointed to programs that the report identified as “unsustainable.”

In response, Cole read back what he got from Green’s feedback.

“Maintaining (Energy and Society) provides some essence of maintaining some of the interest in Geology and gives that program a chance to develop,” Cole said. “I hear that, and that’s the type of feedback or input that would help me right now.”

“I find it disheartening that Energy and Society is on the chopping block even though, as you noted, it’s sort of tied into Geology and Environmental Science and Sustainability,” Leszcynski said.

Cole replied by reminding the body that programs with challenges to their sustainability were not necessarily going to be immediately eliminated.

“I would ask a favor: those programs listed under ‘challenges to sustain’ — I don’t want to equate that necessarily to a chopping block,” Cole said.

“I came to this school for the Environmental Science program, and I have found, through taking courses here, that for me, Geology was a more direct path to working with oil and gas companies that work with overall environmental science problems,” Miller said. “It has more options in workplaces, it’s a more specific major, and having options for both a bachelor’s of arts and science in that department really shows the variety that the department can offer.”

Another program that received support was Religious Studies.

“I would like to acknowledge that I fall into a category of students that is quite small in terms of the program that I’m interested in,” June Gromis, ’25, said. “I’d just like to make an appeal on that basis towards Religious Studies as something that should be retained in a significant way. Just because of the college’s history, especially as a Methodist institution, and I think a lot of the connections that religion makes within a social context is rooted in religious life, but also in an academic context.”

However, the report notes that Religious Studies has struggled to attract and maintain majors, citing specifically that the program has graduated an average of just over two majors a year since 2016.

“Majors at Allegheny are impactful for a number of reasons — in terms of staffing, because of the required senior project,” Cole said. “Perhaps if it wasn’t for the senior project, we would put less weight on, for example, major or minor labels and look more at enrollment overall.”

One student, Piper Martinez, ’24, suggested that a program that retained the character of Religious Studies could be created in a more sustainable fashion.

“I would like to propose the idea that — if Religious Studies is not a major — potentially trying to replace it with a major that can be sustained by multiple different programs already in effect, that has the same feel of Religious Studies,” Martinez said. “Religious Studies definitely introduces you into having different thought processes and, honestly, every single Religious Studies course that I’ve taken has been the most challenging for me just because it actually makes me think and actually challenge my points of view, which I think is a very critical point of Allegheny College’s goal.

Even if a major or minor is removed from Allegheny’s curriculum, students currently declared in that program will still graduate through what Cole called “teach out.”

“I’ve been careful to say that students who have declared in a particular program we would work with to try and help with the teach out,” Cole said.

“Let’s work on a one-to-one basis for students that might fall into that category,” Cole said. “It might be that, no, we can’t do that. Or, there might be other pathways to support that student’s interest, or maybe there’s a way to continue that major as a self-declared (major). It’s hard to say without the specifics, but I’m trying to give you the sense of the options that I’m hoping are available.”

Overall, Adams thought that the meeting went well, particularly given previous assemblies attended by the administration

“I’m really pleased with the students — their composure was good,” Adams said. “I thought that people were respectful of each other, and we held it together really well.”

Adams also acknowledged that the meeting came together on relatively short notice, with ASG announcing only that day via social media that Cole would be attending the assembly.

“(Director of Communications and Press Ryder Sullivan) just got the post up late today,” Adams said. “Obviously we’d like to give more notice; it’s something we’ve been working on with our Instagram to communicate more. That’s on us.”

After the meeting, during his weekly office hours in the Campus Center, Cole suggested that part of the reason the campus community is grappling so hard with the program review is the psychological weight of adjusting how things are done.

“There’s sorrow with loss,” Cole said. “If we stop doing something — anything — there’s a sense of loss around that. That, psychologically, is an important thing for me and others to recognize.”

“I believe we’ve gone through the denial, past some resistance, and we’re moving towards acceptance,” Cole said. “In that place, that’s the space where I believe Allegheny can make its best decisions that include broad input to move forward. We need to move forward in the best ways possible. That doesn’t mean everybody’s going to be happy about the outcomes, but it’s the best way possible given the parameters we’re working with now.”

AC Unite, the group of students organized in opposition to the Task Force and planned program reductions, released a petition on Change.org the day that the report was released. The petition calls for, among other things, “the preservation of all offered majors, minors, and other degrees as of the Fall 2021 semester.” No such feedback was provided at the General Assembly, and AC Unite did not reply to multiple requests for comment.

According to his presentation, Cole will use the feedback from the General Assembly, as well as feedback from the Faculty Council, to prepare an Academic Program and Faculty Staffing Plan. This plan will be submitted to President Link in mid-January for review; once Link reviews it, the plan will be submitted to the Board of Trustees for their review and final vote. Cole expects the final plan to be presented to the college community in mid-February