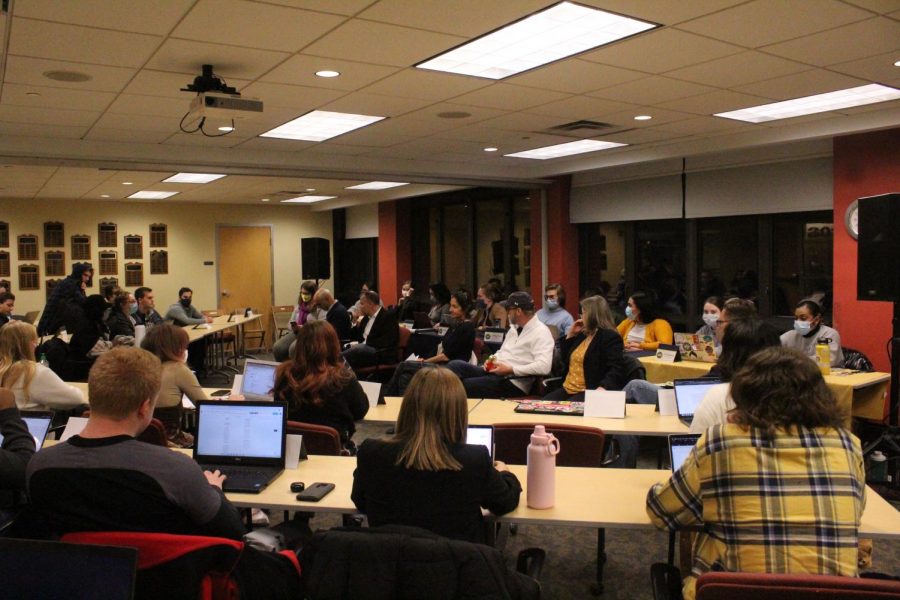 Members of Hilary Link's cabinet sit in between the ASG Cabinet's dais and the ASG Senate prior to the Nov. 16 General Assembly

Students packed room 301/302 of the Henderson Campus Center Tuesday night to hear President Hilary Link and six of her cabinet members field questions from the student body in a tense session of the Allegheny Student Government General Assembly.
The Q&A session, which included submissions from before the session and a live Slido chat as the night progressed, touched on a number of issues across campus. ASG declined to release a transcript of the live session because “many of the questions contained discriminatory, insensitive, and harassing information.”
However, in an email to The Campus, Harris did provide a “sentiment analysis” the platform produced of the event. That analysis showed that almost 60% of the 63 questions asked were considered “negative” by the platform, while just one was considered “positive.” The remainder were classified as “neutral.” However, the platform did not differentiate between “negative” and “derogatory,” and questions about difficult topics may have been analyzed as “negative” without being harmful or toxic.

Several messages in the live chat referenced specific and personal ongoings of administrators and ASG officers. This included a question about Vice President for Institutional Advancement Matthew Stinson.
“Why has VP Stinson not been investigated for his discriminatory behavior towards LGBT and disabled employees?” ASG Parliamentarian Rachael Harris, ’23, read from the dais.
Link, who fielded most of the questions, laughed, adjusted her seat, and said, “I’m not going to comment on that. There’s nothing to investigate.”

Beyond the dollars and cents, however, Binnington also saw a moral imperative to rebuilding Allegheny’s student experience.
“It’s partially financial; there’s no doubt about that.” Binnington said. “But it’s more than that. It’s also moral. It is unethical of institutions of higher education to recruit students and promise them things, and then not put efforts into delivering those things.”
Another question asked about the 2019 rape in Ravine-Narvik Hall, specifically in regards to a suit filed in July 2020 by the victim alleging the college failed to provide adequete security in on-campus housing.

“What happened that night was a horrific tragedy and we have certainly expressed as much to the student,” Link said. “We can’t really comment on it because there is a legal issue ongoing, so we can’t really talk about that. If any of you were here, in this very room, the night that that happened, you remember seeing many of my colleagues and me in tears. It was a horrific, horrific thing.”

Chief Financial Officer Linda Wetsell then outlined some of the major changes made since the incident, including investments in security cameras, dorm room locks, and better lighting on campus. Link also added that Public Safety and Chief of Staff Kevin Kovalycsik will be reviewing these efforts in the coming weeks.

Earlier in the session, Link responded to another question that called her disconnected and not receptive to constructive criticism.

“The vast majority of my work is making sure that everybody on this team is doing their job to work in the area that they’re responsible for,” Link said. “That being said, it’s never my intention to be distant. I attend student events all the time … I meet regularly with (ASG President) Noah (Tart) and (ASG Vice President) Sophie (Adams). I was invited to come to this and I happily accepted. It’s sad to me that that’s the perception; it’s certainly not (my) intent. I hope it’s clear to everybody that all of the work that my team and I are doing is all about the students and trying to make this institution better.”

Link also suggested that students feeling disconnected from their college administration is not a problem unique to Allegheny.

“We have tried very hard — certainly throughout (the COVID-19 pandemic) and as we’re maybe coming out of COVID — to communicate as frequently as we possibly can,” Link said. “That doesn’t always mean coming from me. That doesn’t always mean coming from somebody on this stage … We can always do better. I don’t think there’s an institution in the country where people who are not part of the administration don’t feel like the administration doesn’t communicate as transparently and as well as it should.”
Valentin thinks that improvement can also come from students trying to express their grievances.
“We do have to work on communicating things effectively and getting our points across,” Valentin said. “If there is an issue with (Link) being receptive I do think we have to be more careful so that we do have our issues solved.”
In an October interview with The Campus, however, Adams noted that students had not been showing up to General Assemblies to voice their concerns, citing in particular a lack of constituents after an Oct. 22 protest in front of Bentley Hall regarding the Academic Program Review.
Valentine agrees with Adams that ASG can be a powerful tool for students to speak out.
“I feel like us coming to these meetings as constituents and voicing our opinions is doing a lot more in the effort to help everyone on campus,” Valentin said. “We will be coming to more (assemblies) and we will be inviting our peers.”
But even members of ASG countered the idea that attending General Assemblies and meeting regularly with Tart and Adams was enough on Link’s part.
“I think it would be important to remind her that even though you guys are ASG, ASG does seem to have a close-knit environment within it, even though we’re supposed to be the student body,” Senator Veronica Green, ’23. “So remind her, if you get a chance, that just because she’s really active and engaged with the two of you then that doesn’t mean that that connection translates to the rest of the student body.”
Tart said that he would be “bringing that up” in his next meeting with Link. After another senator spoke, however, Tart cut off debate unless the body voted to hold a discussion on the topic. Senator Kirsten Cadham, ’24, motioned for such a vote, but the proposal was swiftly voted down and the meeting was adjourned.
Ultimately, Valentin thinks Link and her administration need to engage more productively with students and actively respond to their problems.
“I do feel it’s best to not deflect from the issue at hand when it comes to students and their concerns,” Valentin said. “A lot of the discussions are hard and very difficult to navigate through; however, the students are a big part of their livelihood and I do feel it’s best to cater to the mental health and well-being of the students.”