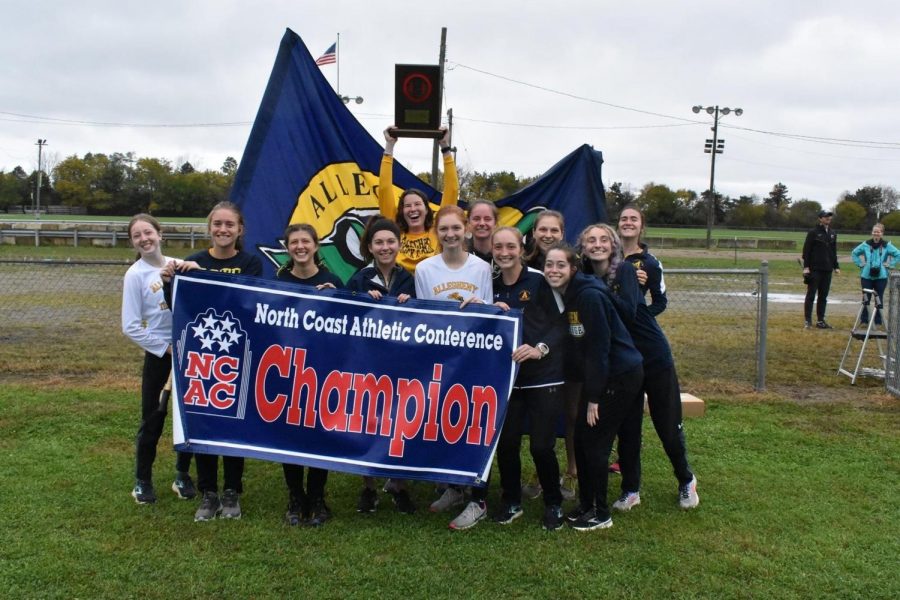 Mourer obtained this honor after Allegheny’s women’s cross country team finished in first place out of eight teams participating in the NCAC Championships on Oct. 30 in Springfield, Ohio. Meanwhile, Aaron picked up the individual crown with a running time of 22:43.7, whereas Wall completed the race at 23:25.4.

Mourer credited the success of the athletes as to why he acquired the award.

“Sweeping all three awards was a big achievement for the team,” Mourer said. “It was something we were hoping to do, even planning to do going into the race.”

“(Aaron is) only our seventh conference champion in school history and Allegheny has a really storied history in that sport of women’s cross (country),” Mourer said. “That puts her along with our all-time greats to have won that race. And then (Wall) being newcomer of the year, that’s the first newcomer of the year I’ve coached on the women’s side since I’ve been here.”

Aaron discussed what the conference title means to her.

“It was really exciting,” Aaron said. “I wasn’t exactly expecting it but I had a chance to win. It was an exciting experience and I’m happy about it.”

Megan reiterated that Mourer believed that she was going to end up in first place before the race began.

“Before the race, my coach and I talked about it and he said, ‘Oh, I think you have a shot at winning so just go out there and run like you’ve been running,’” Aaron said. “It worked out well.”

As for Wall, she mentioned how she was nearly able to win this award in track and field last season, so she was pleased to have earned the accolades for cross country.

“I was a contender for (NCAC Women’s Newcomer of the Year) in track in the spring, and I ended up not having my best race,” Wall said. “So, it felt really good to be able to get it in cross country, especially since we didn’t have a season last year.”

Wall had a second-place finish right behind Aaron and went into detail about her relationship with her teammate.

“I was super happy for Megan,” Wall said. “We are training partners and it was nice that we can go one-two in the race. It was nice to enjoy the victory as a team and not just with individual victories.”

“Right now, (Allegheny’s women’s cross country team) is ranked third (in Division III) and that seems relatively appropriate,” Mourer said. “They are not rolling out in first or second, knowing that finishing one or two spots worse in that might still get a bid. The women are focused on being one of the top teams in the region, going to nationals and doing well.”