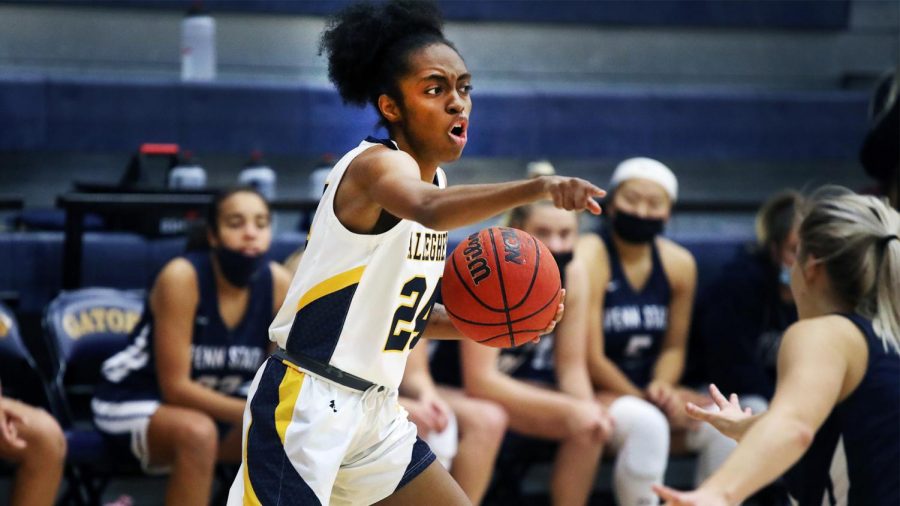 The men’s and women’s basketball teams played their first games this week to open up the 2021-22 season. The men’s team defeated Fredonia in a nonconference away game 88-74 on Tuesday, Nov. 9. Meanwhile, the women’s team played two nonconference matchups this week. They lost at Bethany 85-35 on Monday, Nov. 8, but were victorious in a home game versus Penn State Altoona 65-58 on Wednesday, Nov. 10.

At Fredonia, Allegheny featured three players with 10 or more points: Brian Roberts Jr., ’22, Caden Hinckley, ’23,  and Jordan Greynolds, ’22. Hinckley compiled a double-double as he had 11 rebounds and paced the Gators with five steals.

Allegheny started out with a 10-2 lead, before Fredonia closed the gap and trailed 19-18. The two teams battled back and forth with Allegheny leading 27-26 thanks to a Holden Phillips, ’24, two-point jumper, before going on a 6-1 run in 49 seconds. During this stretch, Roberts Jr. had three points on a free throw and layup, whereas Greynolds cashed in on a three-pointer.

Roberts Jr. mentioned what led the Gators to separate themselves from the Blue Devils in Tuesday’s contest.

“Defense,” Roberts said. “Just locking in and getting some stops to create offense is our main key and if we can do that, we’ll win a lot of games.”

Allegheny’s collective offensive and defensive effort helped the team finish the first half with a 43-37 lead and did not look back as they outscored the Blue Devils 45-37 in the second half. Other contributors included Luke Barker, ’25, who knocked in three field goals with two threes and KC Johns, ’24, who aided Allegheny in the second half with all six of his points coming in the frame.

Head coach Bob Simmons discussed his expectations for underclassmen such as Barker and Johns. The second-years only played in five games in a COVID-shortened season and the first-years have no collegiate basketball experience before this year.

Several players who have continually followed this premise are Greynolds, Hinckley and Roberts Jr. The three of them were all top-five in scoring in Allegheny basketball and are all playing in their third season together. Simmons elaborated on what Roberts Jr., Hinckley and Greynolds bring to the team each time they are on the court.

“(Roberts) is arguably one of the best players in the conference,” Simmons said. “I think he’s the best, but I might be biased. (Hinckley) and (Greynolds) are very, very good basketball players and they feed off of each other.”

As for the women’s team, in the loss against Bethany, Branygan Bianchin, ’24, was the lone gator to drain double digits. Furthermore, Allegheny was unable to score more than 10 points each quarter. Also, the Gators gave up 26 points and 31 points in the second and third quarters, respectively, which allowed the Bison to extend their lead.

However, Allegheny captured its first victory of the season after breaking the game open in the third quarter. The Gators led 14-12 after the first ten minutes of play and stunned the Lions after being down 6-0. Allegheny finished the first quarter as Chloe Rabold, ’22, and Sydney Watko, ’24, picked up back-to-back threes.

The Gators maintained their two point lead as they were up 29-27 to close out the second quarter. The two teams were tied at 27 in the last 30 seconds before the half, but Emily Lauer, ’25, delivered a layup to put the Gators ahead for good.

In the third quarter, Allegheny racked up 25 points, while Penn State Altoona collected 12 points. Although the Lions outscored the Gators 19-12 in the final ten minutes of play, Allegheny was able to fend off their opponent in front of the home crowd.

Lauer scored a team-high 20 points and administered the first double-double of the season by adding 11 rebounds. Additionally, Lex Caldwell, ’23, and Rabold drove in 13 and 11 points, respectively.

The win gave head coach Kelly Muffley her first victory in her career at Allegheny. Muffley, who spent two years coaching at St. Lawrence, one year at her alma mater in Thiel, and three years at Case Western Reserve explained what the triumph over Penn State Altoona meant to her.

“I’m really excited to (coach) with this group,” Muffley said. “It was a special night where we got to play a lot of people and we finally played exactly how we needed to play to win. To be able to do that here on our home court was great.”

Muffley further expressed what changed for the Gators between their first game versus Bethany to their second game against Penn State Altoona.

“We needed to score in transition,” Muffley said. “I don’t know what the box score is going to say but we need a ton of fast-break passes and that is going to be our bread and butter all season. So, if we play fast and we get the ball ahead we are going to score a lot.”

Caldwell, who was a top-five scorer for the Gators during the 2019-20 season, added that a change of mindset led to her team’s first victory this fall.

“Positivity,” Caldwell said. “We had a couple stops where Altoona was on the run but we kept fighting through that and kept having a positive attitude on the court as our bench as well. We were able to basically come all together as one and push through all of it.”

Both the men’s and women’s team will be playing at Mullen Arena in the Wise Center this Saturday, Nov. 13. The women’s team begins a nonconference matchup with Fredonia at 5 p.m. and the men’s team tips-off for their first home game of the season at 7 p.m. against Saint Vincent in a nonconference contest. The latter will be holding the Greg Richards Memorial Classic, honoring the late 2008 graduate and four-year basketball letter winner that passed away from cancer in 2012.