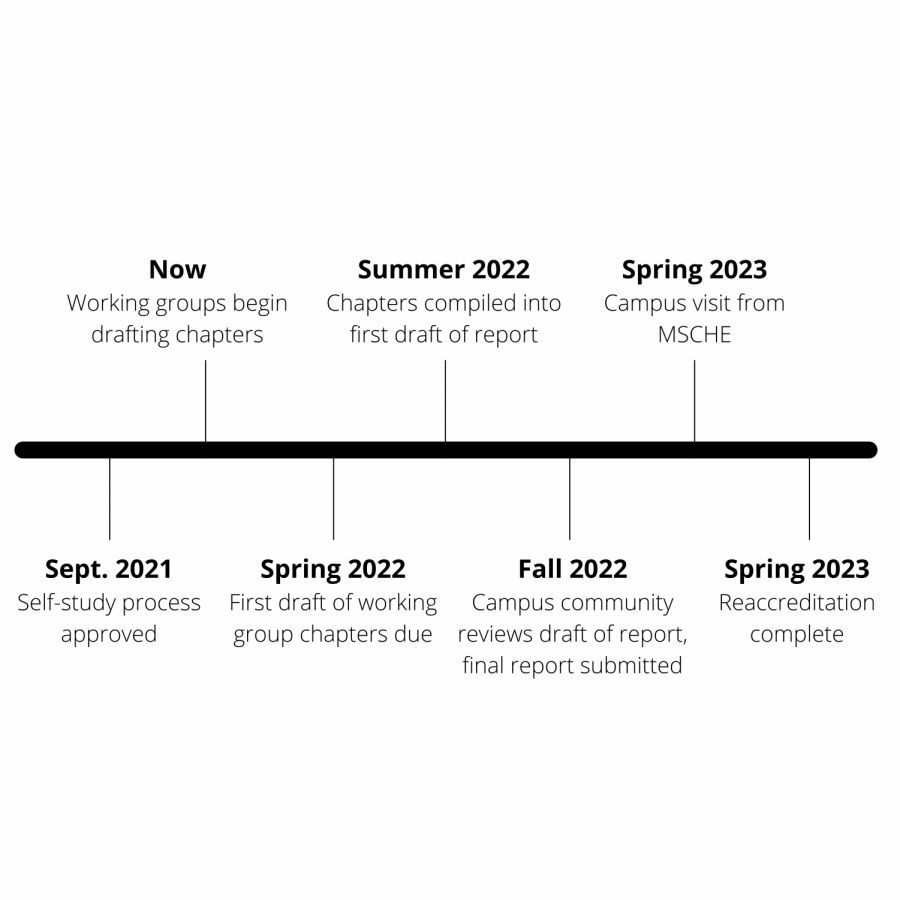 Expected timeline of the reaccreditation process through the next two years.

Allegheny College entered the phase of reaccreditation earlier this semester having already obtained accreditation in the past. Accreditation is a process administered by an evaluative body called an accrediting agency. Colleges are examined to ensure that they are offering a quality curriculum and education to their student body.

The working groups, a mixture of students, faculty and staff, were established at the beginning of the fall semester and have been diligently working to conduct research in order to compile the self-study report according to Jennifer Dearden, professor of music and associate provost and interim registrar and Professor of History and Global Health Studies Kenneth Pinnow. Self-study is the term given to the process in which the institution seeking reaccreditation produces a report on its performance and functionality.

Thion Lee, ’24, who is part of the community engagement working group, spoke passionately about the importance of the work the study groups are doing.

“We’re going over past documents and observing current policies and initiatives under the scope of community engagement,” Lee said. “Part of our research is to go over the promises the college made and essentially hold them accountable by requesting evidence or supporting documents which we will use in our section of the self-study report.”

According to Dearden, the college achieved its first milestone in the reaccreditation process around two months ago.

Dearden also added that work on the self-study design started during the summer and was refined by the working groups from the start of the semester through the end of September.

A general timeline of the reaccreditation process is a part of the self-study design amongst other things, according to Dearden.

Furthermore, Dearden touched on the fact that the self-study document is collaborative and has different sections and chapters that are determined by the different standards set in place by Middle States.

Within the priorities-based self-study design, institutional priorities are identified and chapters are based around them. Dearden explained that the chapters do, nonetheless, address the seven standards of accreditation set by Middle States.

Dearden revealed that Middle States was pleased with the college’s decision to pursue a priorities-based self-study design as it allows the college’s mission to be the guiding force of the entire project.

Working groups for the reaccreditation process are based on the college’s four priorities as they pertain to the self-study plan, which will consist of five distinct chapters when complete.

“The College’s four institutional priorities are curriculum and assessment, student success, community engagement and sustainable financial and institutional structures,” Dearden said. “There will be an introductory chapter within the plan that the steering committee will write but the other chapters will be written by working groups.”

Middle States enforces a limit on the length of the self-study report according to Dearden.

Pinnow explained that Middle States sets a limit on the number of pages allowed in a self-study plan because doing sure encourages the college to critically think and examine what it believes to be the best representation of itself in all aspects.

“Middle States wants us to think carefully and provide them with the best possible representation of us within the self-study design with the most accurate and factual evidence to show for it,” Pinnow said. “They don’t just want us to dig up everything we’ve got and dump it on them.”

The steering committee of the reaccreditation process has been meeting roughly twice a month, according to Pinnow.

“The steering committee meets to go over the progress that has been made,” Pinnow said. “This helps us all stay in the loop and sort of progress through the process together.”

Pinnow commented on the dedication and hard work of the working groups so far.

“Actually, most of the work so far has been done at the working group level,” Pinnow said.

Lee revealed that most working groups have been meeting weekly to keep up with work.

“We mostly meet weekly to just go over what we’ve covered in the prior week,” Lee said. “Usually, we will delegate tasks individually and go over our individual and collective progress during our meetings.”

Pinnow mentioned that the second major task of the working groups after finalizing the self-study was to identify and compile a list of evidence they will need for their chapter of the self-study plan.

“Working groups submit requests to the steering committee for evidence they may need for their respective chapter,” Pinnow said. “We’ve been working to go over those requests since our self-study design was approved in late September.”

Pinnow clarified that evidence, in this case, could be anything from an internal progress report to the methods of assessment that Allegheny has regarding academics.

Pinnow also mentioned that all academic departments at Allegheny are required to periodically submit their own self-study reports.

“The department will generally spend a year or so in evaluating itself and determining whether or not it needs to innovate or improve,” Pinnow said. “These departmental self-study reports are something that a working group may call upon as evidence for their own self-study chapter.”

Dearden revealed that the self-study plan’s first draft should be ready by the start of the fall semester in 2022.

“The working groups’ chapters are due by the end of the spring of 2022,” Dearden said. “The steering committee will work throughout the summer of 2022 to compile the respective chapters.”

“We will allow feedback from those associated with Allegheny College,” Pinnow. “The outlet for this has yet to be determined, but will most likely be something like a Google Form or collaborative meetings.”

Dearden explained that a final self-study report will be presented to Middle States at the end of the fall of 2022, which will be followed by a visit from Middle States officials in the spring of 2023.

Pinnow confirmed that the reaccreditation process most likely will be completed in the fall of 2023.

“You will notice that many of the members of our working groups are sophomores and first-years,” Pinnow said. “We kept the finish date of fall 2023 in mind when creating the working groups. So if you’re a sophomore right now, the college won’t be reaccredited until you’re in the first semester of senior year.”