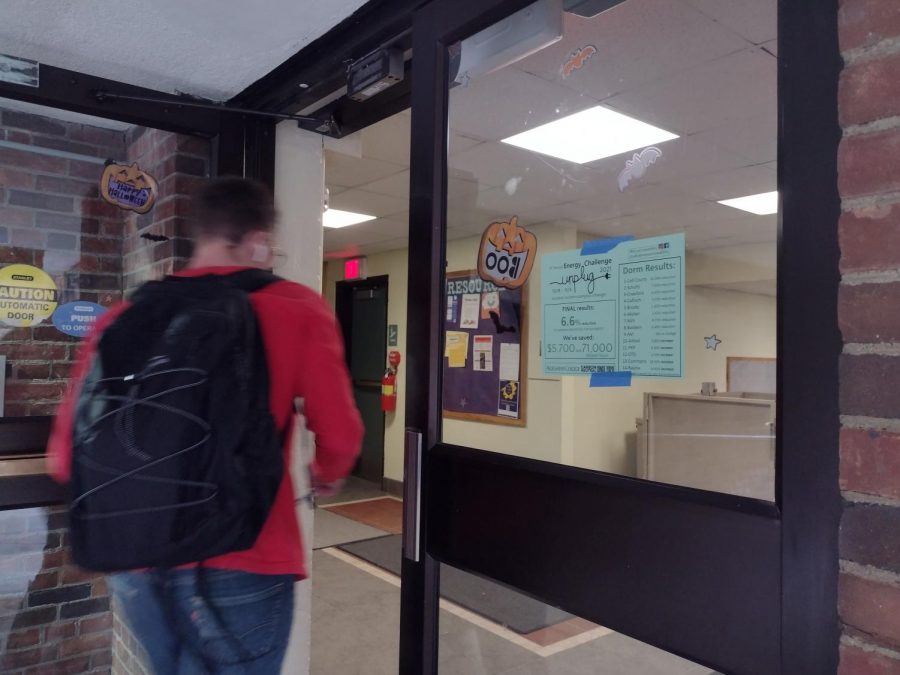 A student enters Baldwin Hall, next to a posting of the results of the Energy Challenge. Baldwin was the lowest hall to reduce consumption; North Village I had no change and five other halls increased consumption.

The results of the energy challenge came out on Friday, Oct. 5 and revealed a 6.6% decrease in campus electricity consumption which has resulted in $5,700 saved and 71,000 kilowatt hours conserved.

The annual energy challenge sought to promote more conscious energy usage during the month of October.

“When I talked to students about what sustainability projects they wanted to see on campus it was mostly visible tangible things like solar panels and wind turbines,” Boulton said. “However, when I would talk to the administration about it they were much more interested in the ability for sustainability work to save us money.”

Boulton elaborated that the energy challenge was a way to accomplish multiple things, such as educating students about their part in overall consumption and also funding the projects students want to see on campus.

“That was how we got all the solar panels up on Doane and Steffee,” Boulton said. “Those were all financed by student action in the energy challenges, and we have also done water refill stations along with retrofitting all of the shower heads on campus.”

Boulton believes the decrease of energy usage was less than that of previous years because of a variety of factors.

“We didn’t have the fall break shut down which helps with the reduction of energy and we have also skipped one year,” Boulton said. “It’s enough that (students) aren’t in the habit and half of the student population has never actually had an energy challenge.”

Secretary of Students for Environmental Action Hannah Heautsche, ’23, explained the different approach taken to the energy challenge this year.

The energy challenge encouraged students to decrease their energy usage through progress reports on doors every week and providing opportunities to participate in activities that did not require energy use.

“One of the things SEA held was a hammocking event at the beginning of October,” Heautsche said. “Different clubs also got involved. Grounds for Change did a bring your own light event and Outing Club hosted events such as night walks and stargazing. It was things that were all over campus and Meadville that didn’t require energy usage or actively aimed to reduce that.”

Gear Manager for Outing Club Ashlynn Peachey, ’23, gave insight into how clubs, such as Outing Club, were able to participate in the energy challenge.

“Before the energy challenge started (Heautsche) reached out to about 15 clubs who had done events in the past,” Peachey said. “They were asked if they were willing to do something again and based on those responses it was all coordinated and the events were put on a calendar.”

With the energy challenge being back, many expect that energy reduction will go up in the coming challenges.

“I remember coming in freshman year and it was kind of this hype thing that all the green clubs and environmental students were super excited about,” Peachey said. “I think it’s going to keep building momentum as the years go on.”

The energy challenge was meant to promote sustainable habits that can continue past the month of October and become a part of daily life.

“I think it’s important for students to understand that individual habits actually do impact consumption,” Boulton said. “It’s a really good thing to know that you can manage how high those energy bills are by having a solid base of habits for energy consumption.”