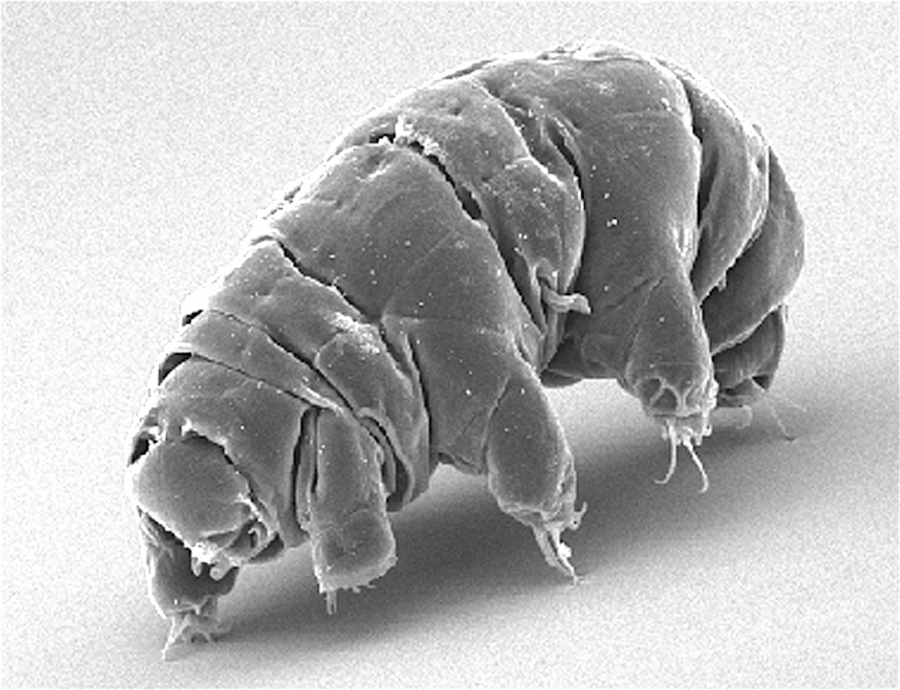 A microscope image of a tardigrade. Tardigrades, also known as water bears or moss piglets, are typically 1 nanometer but can be even smaller in size.

Tardigrades, also known as water bears or moss piglets, are microscopic organisms that are typically 1 nanometer — 0.04 inches — but can also be much smaller in size, according to Britannica.

They were originally discovered  in 1773 by the German pastor J.A.E. Goeze, who came up with the original nickname, water bear, according to Microbial Life Educational Resources.

They were assigned the name Tardigrade by the Italian biologist Lazzaro Spallanzani three years after this discovery.

During a speech in 1773, Goeze spoke about why he selected to name them water bears.

“Strange is this little animal, because of its exceptional and strange morphology and because it closely resembles a bear en miniature,” Goeze said. “That is the reason why I decided to call it little water bear.”

They can be found in a variety of different places around the world, including damp moss, flowering plants, sand, freshwater and even in the sea.

One of the key characteristics of these creatures is that they are able to tolerate extremely cold temperatures as well as desiccation — the extreme drying, or loss of moisture in an organism.

When exposed to unfavorable conditions, such as cold temperatures or drying conditions, these creatures will go into a state in which the body of the organism dries out and appears to be lifeless.

During this time, the rate of metabolism can reach as little as 0.01 of the normal rate.

For his senior project, Luke Foster, ’22, wanted to learn more about how this tolerance could relate to different forms of desiccation, by utilizing a model organism known as Hypsibius exemplaris.

“I wanted to see how tolerant they are to different forms of desiccation, specifically osmotic stress,” Foster said.

Osmotic stress occurs when the concentration of salt is different than what they are used to.

“They would be undergoing osmotic stress if they were in a solution that was a lot saltier than they were used to,” Foster said.

Tardigrades are resistant to these extreme conditions as a result of cryptobiosis and osmobiosis.

Cryptobiosis, according to Microbial Life Educational Resources, is the state in which there is a reduction in metabolic activity so great that it is undetectable, and has been identified as a death-like state.

In fact, various organisms have died as a result of the cessation of metabolism.

On the other hand, osmobiosis occurs when there is an increase in the concentration of solute in the solution that the organism lives in, according to ScienceDirect.

An article published in Oxford’s Zoological Journal explains that since salt dissociates into ions that are able to build osmotic pressures, the tardigrades would enter quiescence, or metabolic shut-down.

To learn more about the morphology of the organisms when they undergo these processes, Foster will use scanning electron microscopy and phase contrast microscopy.

By using the scanning electron microscope, Foster will be able to learn more about the structure of the tardigrade and how drying out and other extreme stimuli can influence the morphology of the creatures.

Meanwhile, phase contrast microscopy is used to produce images of clear specimens such as living cells, microorganisms, thin tissue slices and many other things.

Through the use of microscopy, he wants to learn more about whether Hypsibius exemplaris is a good model for the morphology of tardigrades that live in the northwestern region of Pennsylvania.

One of the key limitations in his research was the seasonality of tardigrades.

“I looked at local tardigrades over the summer to look at their population distribution in terms of different moss conditions,” Foster said. “So I was able to reliably sample them over the summer. But now trying to get them during the fall, I found that there’s a little bit of seasonality with them and I haven’t been able to get as many as I could in the summer.”

During his research, Foster discovered that there was not actually much research surrounding tardigrades that have been found in northwestern Pennsylvania.

Tardigrade research has only just recently sparked as a result of the growth of the field of astrobiology.

In 2007, K. Ingemar Jönsson, an ecologist, discovered that water bears are such a good model for this field because they are able to tolerate dehydration, extreme temperature and radiation.

“So that’s actually one of the things I want to find out. I’m super excited about it because there’s actually zero published literature on anything about tardigrades in northwestern PA,” Foster said.

Through his research, Foster hopes to pave the way for future tardigrade research in northwestern Pennsylvania.