“Bourbon at the Border” 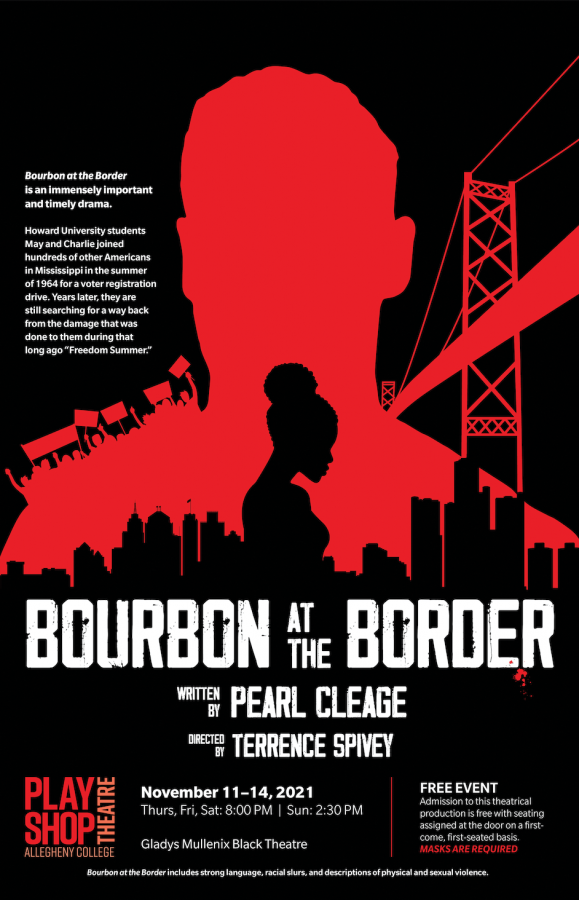 Poster contributed by Mary Dosch Poster for “Bourbon at the Border,” which opened in the Gladys Mullenix Black Theatre on Thursday, Nov. 11.

Allegheny’s Playshop Theatre will present Pearl Cleage’s “Bourbon at the Border” under the direction of guest director Terrence Spivey. The production’s cast is set to make history as the Playshop Theatre’s first all-Black cast in its 91-year history.

“Bourbon at the Border” recalls two Howard University students, May and Charlie, joining hundreds of other Americans in Mississippi in the summer of 1964 in efforts to register voters who had long been denied their rights. The show depicts how years later the characters are still deeply affected by the damage done to them during the “Freedom Summer.”

Since its publication in 2005, “Bourbon at the Border” has been an impactful piece of writing for many people including the show’s lead actress Joy Ware, ’25.

“I’d actually read ‘Bourdon at the Border’ my junior year of high school through theater,” Ware said. “I just fell in love with the story. I was completely caught off guard when I came here and heard they were doing auditions for it but I thought it was so cool.”

Ware is playing the role of May who has the most lines in the show, including a two and a half minute monologue. Though the role and the production can be demanding, she claims that the comradery of the show’s small cast has been a consistent source of support for her.

“I really tried to put my all into the part,” Ware said. “It was a little intimidating at first but the cast is so inviting and they make everything easier for me.”

One of those cast members is Jamir Wilson, ’23, who plays May’s husband Charlie. Despite having no prior acting experience, Wilson was encouraged by his girlfriend to audition after she met Spivey on campus.

Wilson landed his part and has taken to Spivey’s acting tips even when Spivey recommends against acting.

“Terrence makes sure we’re having fun and that we’re not necessarily trying to act,” Wilson said. “He says just be Charlie, or be Rosa, or May, or Tyrone. If you can be the character then there’s no acting.”

Those names make up the entirety of the characters in the show. The cast is made up of just four members which has allowed Spivey and the cast to have meaningful conversations.

“I love that it’s a small cast and with it being an all-Black cast we relate to each other a lot,” Ware said. “Working with (Spivey) has been great and he’s helped me feel more comfortable. I think there’s something special about a Black director with an all-Black cast. We’ve been able to touch on deeper topics like what Freedom Summer was all about and what it means for us to do this piece as young adults. So it’s comforting to have him engaging with us about things like that.”

This engagement with the topic has extended beyond the stage as well. The cast was encouraged to do some digging into their family history to find connections to the material.

“(Spivey) will be like ‘get in touch with your great aunt or get in touch with someone who’s the age of the character you’re playing’ and we all did and so now I have an accent you’ll hear at the show,” Ware said. “But for all of us to take a look at our past, I feel like now we all know what it is to be Black beyond just knowing what it’s like today.”

Engagement with racial injustice through the medium of theater has become a staple to Spivey’s work.

After graduating from Prairie View A&M University with a Bachelor of Arts in theater, Spivey spent years at Cleveland’s Karamu House, the nation’s oldest African American theater, where he became the theater’s artistic director.

Currently, Spivey is a guest artist in residence at Allegheny and has taught a Black theater history class while directing the “Bourbon at the Border” production.

Through his work which includes his most recent award winning film, “Resurrection of the Last Black Man in 08:46,” Spivey has a reputation that precedes himself as someone willing to tackle heavy topics.

“When they bring me in, those who look me up and Google me know a lot of what I’ve done has dealt with addressing large wounds that have been covered by Band-Aids,” Spivey said. “That kind of stuff is very taboo as a subject matter for me.”

The weight of the subject and the historical significance of being Allegheny’s first all-Black cast is not lost on those a part of making this history.

“Sometimes you don’t know how special something is until it passes, but I’m just in the moment right now,” Wilson said. “I know this is going to start some big things for Allegheny theater. It’s important for Allegheny to showcase that they want to support stuff like this and put on an all-Black production. It’s important for us because representation is everything.”

The production’s level of Black representation has helped the cast appreciate the work that is being put into the show and made the experience more personal.

“I can’t wait for people to see the set because I really love it, it’s amazing,” Ware said. “Terrence’s friend Richard Morris Jr. came all the way from the Karamu House to design the set and it looks great. Props to him because that’s a lot of work and he’s Black as well so there’s really a heartfelt feeling to all that work.”

Despite the seriousness of the show’s theme, there are other aspects of the production that cast members are excited for the audience to see.

“I really want the audience to be excited about the humor because I honestly think it’s pretty funny,” Ware said. “I know it handles a lot of intense topics but you can still laugh. It’s not just going to be super depressing. So I’m looking forward to that because we’ve really worked on landing the jokes.”

While the cast handles systemic issues that span beyond their lifetime, they are embodying characters that do the same which contributes to the aspect of humor.

“We’re all under 20 and we’re playing characters who are 40 years or older,” Wilson said. “We have to act older so it’s funny when you see it but I think we do a pretty good job at it.”

Spivey seems to agree as he raves about his cast’s quality of work.

“It has been gratifying working with these Allegheny performers and watching them embrace such an important play,” Spivey said. “They are all so smart and have really embraced their roles.”

“Bourbon at the Border” will be performed in the Gladys Mullenix Black Theatre in the Vukovich Center for Communication Arts. Audience members must be masked during the performance and all showings are free of charge. Audience members will be encouraged to pay-as-you-wish with all donations benefiting the Tamir Rice Foundation. Show dates are Thursday, Friday, and Saturday, Nov. 11-13 at 8 p.m. as well as Sunday, Nov. 14 at 2:30 p.m.