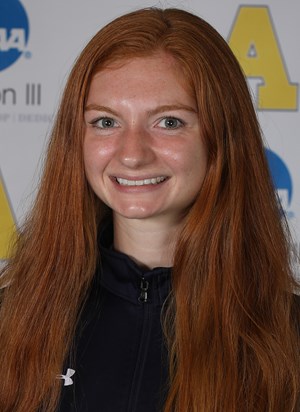 Megan Aaron, ’23, ran in the NCAC Championship for cross country on Saturday, Oct. 30. Aaron earned a first place finish out of 89 runners.

The Allegheny men’s and women’s cross country teams ended their conference schedules at the NCAC championships in Springfield, Ohio on Saturday, Oct. 30. The women won their 16th NCAC championship, while the men placed second behind Depauw University.

Megan Aaron, ’23, shined for the Gators, earning the first place title on the women’s side and NCAC Runner of the Year for her efforts. Close behind was teammate Emma Wall, ’24, who finished second in the race and earned NCAC Newcomer of the Year after not being able to compete due to COVID-19 last fall season.

Head coach Benjamin Mourer, ’07, was happy with both of his team’s ability to race with a lot of energy from the start.

“The men ran first and we brought the energy, the guys led very early in the race, but throughout the race Depauw slowly moved up on us and really pulled away from us in the second half,” Mourer said. “For the women it was similar that they came out aggressive but they also stayed out in front, again that was exactly what they were supposed to do but the women got to do what they wanted to do, which was win.”

These two strong performances at the conference championships came after both teams lost important members for most of the regular season due to injuries. Their returns helped propel both Gator teams to their strong conference finishes.

Aaron was one runner who was able to bounce back after facing setbacks, winning NCAC Runner of the Year after joining the strong Gator team for just two races. Mourer commended his runner on her strong performance after the delayed return to racing.

“Megan had been dealing with a lot of setbacks this semester, but she is obviously at a different level than everyone else in the conference which is really cool,” Mourer said. “So, Megan was really excited with the race and I only think she’s going to get better in her next one, two races.”

On the men’s side, Logan Meyer, ’22, came back from an injury and proved to be a reliable runner this season after finishing second for the Gators in both meets he was able to run this year. Meyer also finished seventh individually at the conference championship meet.

Mourer remarked on the role that Meyer has been able to fill on the team since his return.

“One big addition late in the season for us was Logan Meyer, who ran one regular season meet and was plugged in for the conference championship,” Mourer said.“Without Logan in the mix, we weren’t nearly the team we were with him there so that was a big addition.”

After their NCAC championship, the 21st-ranked women’s team looks forward to regionals where they have a chance to qualify for nationals as a team. The team hopes to not only qualify, but try to win at the national level.

Mourer commented on the team’s focus on giving it all they have for their last one or two races.

“The general goal is always to make sure we go to nationals to compete,” Mourer said. “The goal is never just to qualify for nationals, the goal is to qualify and be there competing well.”