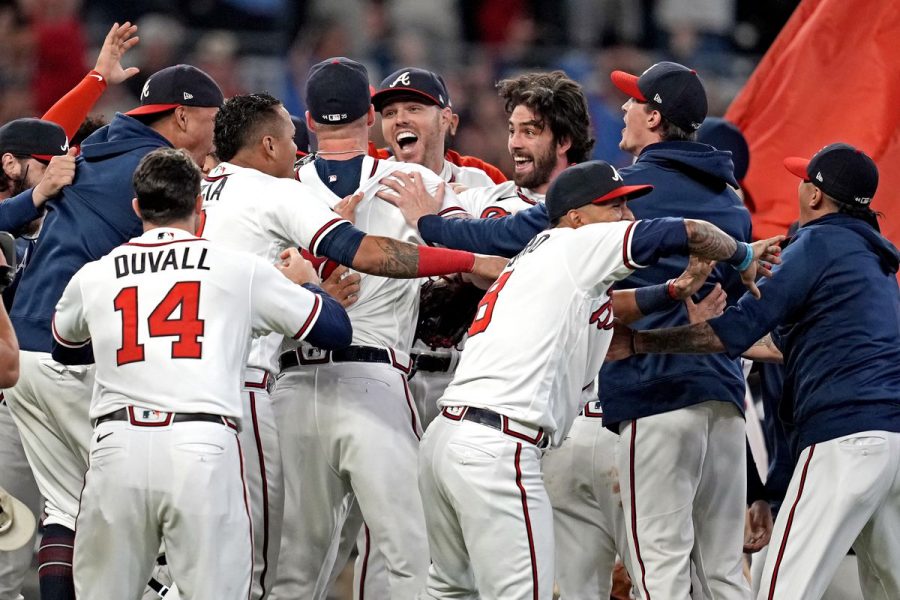 The Atlanta Braves captured their fourth World Series as a franchise and won the Fall Classic at Minute Maid Park in Houston, TX. on Nov. 2.

The Atlanta Braves defeated the Houston Astros to clinch their first World Series title since 1995 on Nov. 2. The Braves won the final game of the series via a 7-0 victory and won their fourth championship as a franchise, the second of which they have won since they began playing in Atlanta in 1966.

The Braves beat the 95-win Milwaukee Brewers in the National League Division Series in four games, the 106-win Los Angeles Dodgers in the National League Championship Series  in six games, and the Astros — who have been to the World Series three times in the last five years — in six games. The Brewers boasted arguably the best pitching trio in baseball with Corbin Burnes, Brandon Woodruff and Freddy Peralta, whereas the Dodgers and Astros were both the favorites in each series.

Overall, Andrew Stablewski, ’24, was thankful that the Dodgers and Astros did not play in the World Series this year as the two teams faced off back in 2017.

“I am glad too that it wasn’t the Dodgers versus the Astros because I find myself not liking the Dodgers either,” Stablewski said. “It was good to see Atlanta win because I feel like they were a good team to win the World Series.”

“The Dodgers are a huge organization,” Senchur said. “I studied this in my FS class freshman year. The Dodgers budget is crazy high, and the Braves are one of the lower expense teams, so I thought it was really cool they beat them.”

Besides their postseason foes and financial situation, the Braves path to baseball’s biggest stage was filled with obstacles along the way. Before the season began, PECOTA, which simulates major league baseball seasons and offers projections for each year, predicted the Braves would be in first place in the NL East. However, many baseball fans were shocked that PECOTA chose the Braves over the New York Mets, who signed Francisco Lindor to a 10-year, $341 million contract before the season began.

At first, the Mets were the frontrunner in the division thanks to Jacob deGrom. The two-time NL Cy Young Award winner was vying to break Bob Gibson’s season ERA of 1.12, the lowest ERA in the modern baseball era (1920 onward) set in 1968. Furthermore, the Braves did not have their ace in Mike Soroka for nearly the entire season and lost MVP candidate Ronald Acuna Jr. to a season-ending ACL tear right before the All-Star game, which further dampened their chances of winning it all.

Right after the All-Star break, deGrom came down with a season-ending injury and the Mets began to fall apart. Even so, the Philadelphia Phillies looked like they would have a shot at the NL East crown, especially with Zach Wheeler and Bryce Harper looking to win some hardware.

Nevertheless, Braves General Manager Alex Anthopoulos decided to give his team the best chance at winning the Commissioner’s Trophy. Anthopoulos traded for Adam Duvall, Joc Pederson, Eddie Rosario and Jorge Soler. Duvall led the NL with 113 RBIs, whereas Joc Pederson and Eddie Rosario helped the Braves detrone the reigning champions in the Los Angeles Dodgers in the NLCS. The latter in Rosario won NLCS MVP honors and Jorge Soler hit three-go-ahead homers, including a three-run jack in Game 6 to earn the World Series MVP.

The Braves pitching also led them to become the eventual champions. The three-man playoff rotation consisting of Charlie Morton, Max Fried and Ian Anderson were crucial to their success. Morton had a 3.24 ERA this postseason before breaking his leg on a 102 mile per hour comebacker in the World Series, yet still stayed in the game long enough to retire three more batters. Meanwhile, Anderson tossed five no-hit innings in Game 3, and Fried emptied the tank with six shutout innings in Game 6.

The Braves success extended to their relievers as they overcame bullpen inconsistencies that plagued them on their playoff runs from 2018 to 2020. Will Smith was a shutdown closer all year long and in the playoffs. Moreover, with the Braves up 4-2 in the seventh inning of Game 6 of the NLCS, the Dodgers had runners on second and third. The Braves’ setup man in Tyler Matzek, recorded three straight strikeouts to help send the Braves to the Fall Classic and added two scoreless innings in the final game of the World Series.

Heading into the 2021-22 offseason, the question remains: can the Braves repeat next season? No team since the 1998-2000 New York Yankees have been able to win at least two World Series in a row, and the 21-year stretch without a back-to-back champion is the longest in baseball history.

Dalton Dubois, ’22, believes Atlanta can hoist the Commissioner’s Trophy in 2022. He recognizes that the Braves will need to re-sign several impending free agents such as franchise icon Freddie Freeman and the four players aforementioned that were acquired during the trade deadline.

“After an experience like winning the World Series, I feel like the (Braves) don’t want to go anywhere,” Dubois said. “They want to have that same team as long as they possibly can hold onto it.”