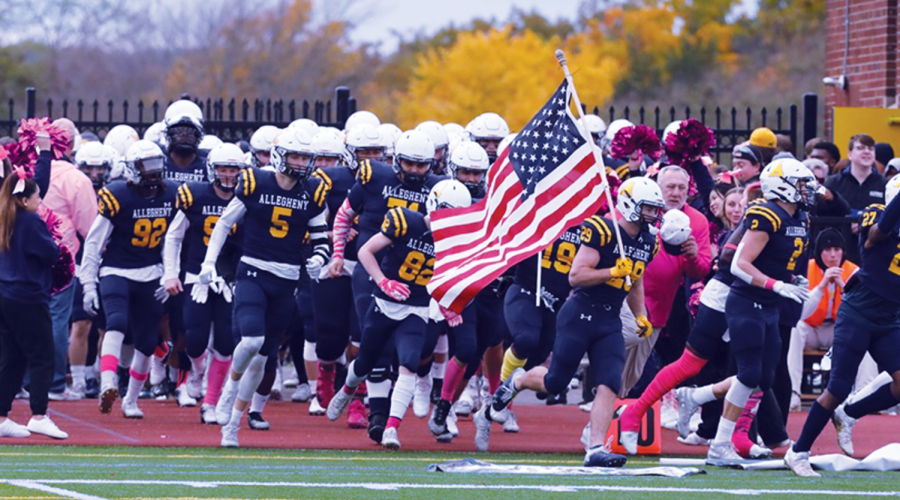 Photo contibured by Ed Mailliard. The Allegheny Football team takes the field as they are cheered on by cheerleaders and fans. Players and cheerleaders sport various articles of pink clothing in support of Breast Cancer Awareness Month.

In their final home game of the month on Oct. 30, the Allegheny football team took on Wittenburg while showing support for Breast Cancer Awareness Month  with a “pink out” theme.

In 1985, the American Cancer Society and Imperial Chemical Industries launched the first ever BCAM. The campaign received help in raising awareness from former first lady Betty Ford who was diagnosed with breast cancer during her husband’s presidency.

Since its launch, the movement has grown worldwide, and wearing pink during the month of October has become synonymous with support for the cause.

“I think the breast cancer awareness theme is a fan favorite or at least a favorite for players,” wide receiver Anthony Steinpreis, ’22, said. “It allows us to have some variety in what we wear and it’s a united purpose too. The cheerleaders become a part of it and the fans can be a part of it. I know it has a special place in a lot of people’s hearts too and the theme supports a good cause.”

According to the National Breast Cancer Foundation, 1 in 8 women will be diagnosed with breast cancer. The prevalence of the disease makes for many personal connections to the cause.

“It hits kind of close to home for me,” cheerleader Katherine Leyonmark, ’22, said. “My mom’s a breast cancer survivor and has been cancer free now going on four years so it’s a theme that means a lot to me.”

Even for those who have not been directly affected by the disease, many know someone who has.

“Our coach’s wife is actually a breast cancer survivor so it’s one of those things that holds a lot of meaning to him and a lot of other people,” Steinpreis said. “I know some guys on the team who have had various members of their families go through or are still going through it.”

“We at ASG bought all of the items that we gave away such as pink pom poms and noise makers and things like that,’’ Allegheny Student Government Chief of Staff Genesis Pena, ’22, said. “When we started working together through MEC, we really wanted to get student participation in games up. It’s something we talked about at ASG and something President (Hilary) Link and the trustees wanted us to work on.”

“I think collaborating with other big groups is working because a lot of students are coming to the games,” Pena said. “We plan to do a few more things with winter sports and ASG wants to do another giveaway. We just did the sweatshirt giveaway at the football and volleyball games so we want to do another one of those. Giveaways really entice people to come to games when they know they’re going to get something free.”

The extra help to promote themes has received positive feedback.

“I think it’s nice when the school helps fund the theme,” Leyonmark said. “They were passing out the poms and ASG gave us money for bows and poms so we would have some pink too.”

While BCAM has a serious message behind it, there is a fun element that comes with incorporating pink into the team’s blue and gold color scheme that many enjoy being a part of.

“I tried to look around for anything I could find at Dunham’s and I know some guys were looking for pink gloves but they were all out,” Steinpreis said. “I personally just did the pre-wrap that goes underneath tape. Some guys went all out, though. (Moses Snell Jr., ’22,) had a pink leg sleeve and arm sleeve and was going nuts with that and some guys had pink hoods so we all had different looks.”

These different looks were effective in drawing eyes which is the first step in spreading awareness for regular cancer screenings.

“It’s kind of funny to see all the coaches in pink jackets and the football players decked out in pink so I’d say the pink out theme is definitely both fun and effective,” Leyonmark said.