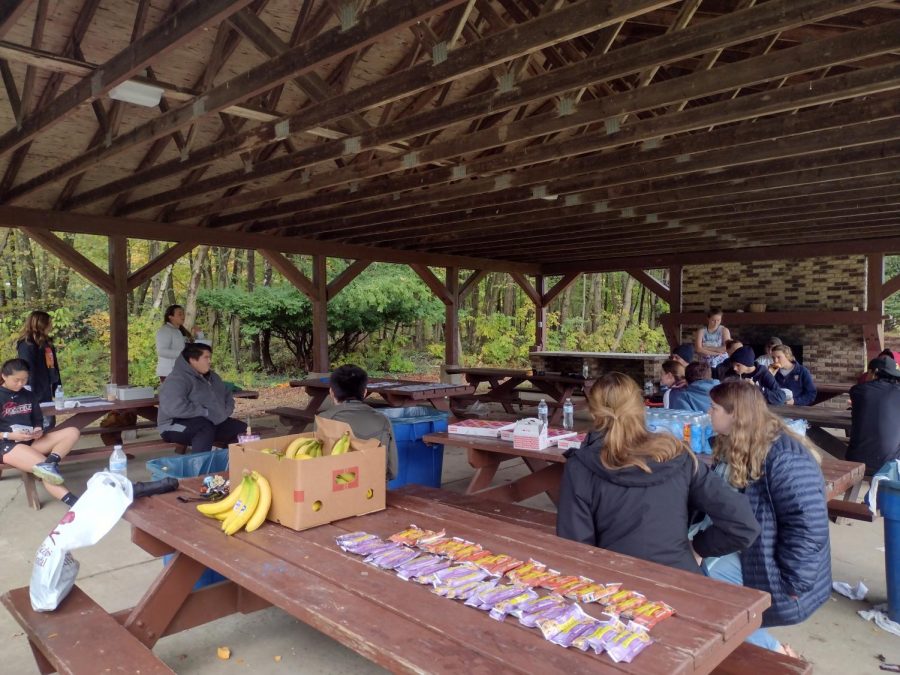 The participants from Allegheny’s first Up ‘til Dawn 5K on Sunday, Oct. 24 munch on some post-race snacks after going through the cross country course on Robertson Athletic Complex.

On Sunday, Oct. 24, Allegheny hosted its first Up ‘til Dawn 5K run. The program is part of Student Involvement and Leadership at Allegheny. The nationwide organization has the goal of raising money and awareness for St. Jude’s and childhood cancer.

Through rainy and chilly weather, 15 runners competed in Allegheny’s cross country course over the weekend. Sami Mirza, ’24, won the race with a 21:36 mark. His average mile time was a tad under seven minutes long. The fastest female runner, Marrin Crist, ’25 came in fourth place with a 23:30 run time.

Mirza expressed how thrilled he was after his first place finish.

“I never won any races except for time trials in practice (in high school),” Mirza said. “It was surreal that on this rainy day at a race that was not the biggest race you’ll ever see, but it was a lot more about people getting out there, running, jogging with their friends and enjoying the space that I was able to win my first race.”

Mirza illustrated why comfortability was a factor to his resolve to run the race.

“It was a local campus event,” Mirza said. “I suppose I could have gone to try to find a 5K in Meadville or in the surrounding area if I wanted to but it was an Allegheny event right up at Robertson on a weekend. It was pretty accessible and so I thought it would be the perfect thing for me to do.”

Blake Neiderlander, ’24, a runner in the race and an executive board member of Up ‘‘til Dawn, explained why he decided to participate in the race.

“I know that I love to run when I can, not to compete but if it’s for a good cause I am happy to race,” Neiderlander said.

Neiderlander also mentioned how his background as a runner, and coming from an athletic family led him to the 5K race.

“I have an older sibling that is also very athletic,” Neiderlander said. “That kind of competing or the enjoyment of competing against each other, whether that was biking or running, has led me to enjoy the hobby of running now.”

Overall, Neiderlander is happy that he had fun during the event despite the rough conditions.

“We lucked out because the rain held off, so that was great,” Neiderlander said. “It was cold but I would do it again in a heartbeat. It was a good time. I think a lot of people that did show up enjoyed the race. We were slipping and sliding there a few times going down the hill or trying to turn up the hill, but other than that it was a good time.”

Genevieve Feltmeyer, ’24, spoke similarly about how she felt good about running in difficult conditions.

“It was definitely muddy, but the mud honestly made it really fun,” Feltmeyer said. “It was enjoyable, even though it was really sloppy outside.”

Feltmeyer, who finished in 13th place with a run time of 37:27, described why she signed up for the event.

“I am actually a part of the cross country team, so I know the part that we ran pretty well,” Feltmeyer said. “My friend Blake (Neiderlaner) actually recruited me and he was one of the people running the 5K.”

Several Allegheny student-athletes clashed in the inaugural meet. Marrin Crist, ’25, and Elizabeth Teufel, ’24 are teammates with Felymeyer on the cross country team. Additionally, Anthony Ennis, ’23 is a cheerleader, Jacob Budnar, ’22 plays baseball and Olivia Ave, ’24 is on the women’s swimming and diving team.

The turnout from Allegheny athletics bodes well for future Up ‘‘til Dawn events. Besides the students affiliated with sports teams on campus, other students are curious about when the next race will take place.

Based upon the donations and enthusiasm about the event, Emily Jones, ’22, the President of Up ‘til Dawn at Allegheny College, has faith that there will be more races in the near future.

“From this event we raised $160, so the executive committee (of Up ‘‘til Dawn) had a lot of people asking if we are going to have another (meet) in the spring, or if this will be an annual thing,” Jones said. “We are expecting to have more participants next time, so I’m really excited about that.”

Jones attributed the success of the event to Hailey Stabile ’23, the events and logistics director of Up ‘‘til Dawn.

“Haley was really the one who took the lead on this (campaign),” Jones said. “Her dad is actually one of the people that can time the races since he does it professionally. He volunteered his time and was willing to come up to (Allegheny) and do that for us.”

For those that are interested in learning more about Up ‘‘til Dawn or wanting to take part in future events, you can reach out to Emily Jones at [email protected]