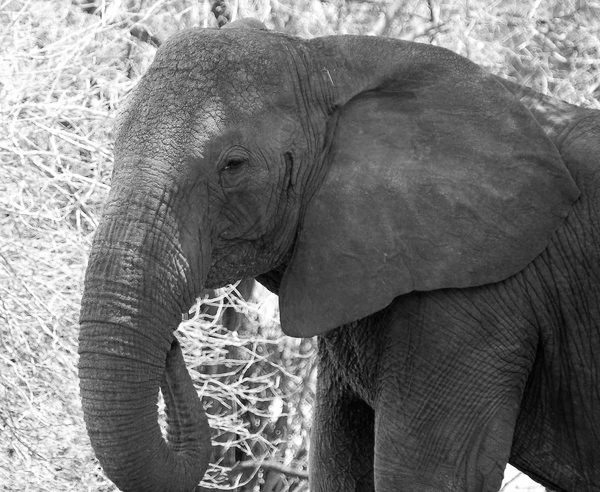 One of the most distinguishing features  of an elephant is their tusks.

For thousands of years, these tusks were used to help in digging, lifting trees and for protection in the case of an attack by another animal.

Although, in recent years, tusks have been removed and illegally sold on the black market.

According to ABC News, poaching has left such a significant impact on elephants that some are born without tusks.

Because of this poaching, the population of African elephants in the Gorongosa National Park declined by 90%, according to Science.

In an interview with Greenmatters, conservationist Samuel Wasser spoke about how the evolution of tuskless elephants defies normal natural selection.

“When we think about natural selection, we think about it happening over hundreds, or thousands, of years,” Wasser said. “The fact that this dramatic selection for tusklessness happened over 15 years is one of the most astonishing findings.”

According to CNN, experts believe that the evolution of tuskless female African elephants in the Gorongosa National Park resulted from a war that occured in Mozambique between the years of 1977 and 1992.

In an interview with ABC News, Shane Campbell-Staton, an evolutionary biologist and professor at Princeton University, spoke about this occurrence.

“During that time most of the large mammal populations plummeted by about 90% including elephants because they were hunted for their ivory by both sides of the conflict,” Campbell-Staton said.

Following the ending of the war in 1992, the number of elephants born without tusks began to increase, according to USA Today.

Animal experts observed that the population of tuskless female African elephants multiplied by three in 28 years.

In an interview with CNN, Ryan Long, a professor at the University of Idaho, spoke about the reasons behind an increase in the amount of poaching that was happening there.

“As a result there were large numbers of soldiers in the area and a lot of associated motivation to kill elephants and sell the ivory to purchase arms and ammunition,” Long said. “The resulting level of poaching was very intense.”

Although, scientists are confused as to why the presence of tuskless females is greater in number than the number of tuskless males.

Yet, the study also showed that tusklessness can occur naturally in the environment.

Long, who was also the author of the study, spoke more about why the number of tuskless females could have increased.

“Evolution is simply a change in heritable characteristics within a population over successive generations, and based on the results of our study, the shift toward tusklessness among female elephants at Gorongosa fits this definition perfectly,” Long said.

He also mentioned the rarity of this evolution in the interview.

“The fact that it occurred so rapidly is rare indeed, and is a direct function of the strength of selection,” Long said. “In other words, it happened so quickly because tuskless females had a much higher probability of surviving the war, and thus a much greater potential for passing their genes onto the next generation.”

In an interview with The Associated Press, Brian Arnol, a co-author of the study and an evolutionary biologist at Princeton, spoke about why only females are being born tuskless.

“When mothers pass (tusklessness) on, we think the sons likely die early in development, a miscarriage,” Arnold said.

According to ABC News Australia, scientists determined that there were two primary gene mutations that resulted in tuskless elephants, which were also involved in mammalian tooth development.

One of these genes was AMELX, a gene found in a region of the X chromosome that differed greatly between the tusked and tuskless elephants.

When AMELX is not expressed, the elephants are born with small incisors, instead of the large ones that typically form the tusks.