The history and haunting of Odd Fellows 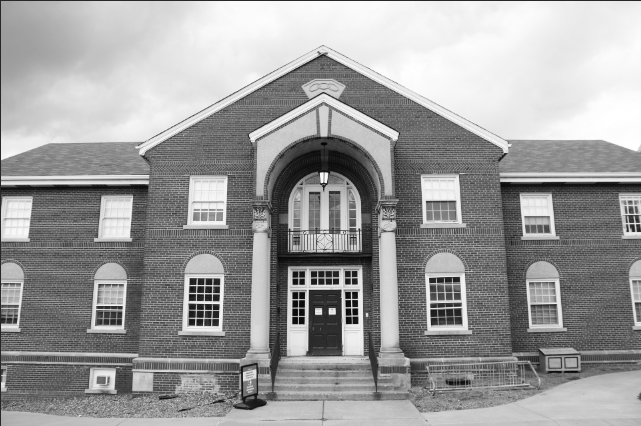 After being practically shuttered from college activity for almost two years, Oddfellows Hall sits as an enigma at the top of North Main Street. The building, which always had a mysterious and imposing presence, has only become more so in its lack of activity — sparking the curiosity of students and faculty alike.

First opened as an orphanage in 1874, the original Odd Fellows Home — which sat on the spot that Oddfellows Hall now sits — was the first fraternal orphans’ home in the world. The house was originally a farmhouse that was converted to fit the Odd Fellows’ needs. In 1875, some of the first residents were admitted. The home grew to house more and more widows and orphans each year until the farmhouse became too crowded, and additions were built in 1897, 1900, 1904 and 1918.

After the number of orphans under the Odd Fellows’ care inflated to 120, discussions about a brand-new facility began. As “Odd Fellows Home of Western Pennsylvania Building History” by Judith Ireland states, the new building was designed with the intention of being a “self-sufficient village.” Among the planned amenities of the 1925 structure were housing, laundry, a gym, a pool, a workshop, a chapel and a bakery.

That new Odd Fellows Home, which was unveiled with fanfare in 1926, is what is now known as Oddfellows Hall. For a while, the home thrived. Odd Fellows lodges from around northwest Pennsylvania were tasked with the upkeep of residential rooms and rose to the challenge. The residents of the home learned to be self-sufficient and responsible through their daily chores, which included cleaning, cooking, yard work and contributing to farming on Limber Road.

Almost 50 years after taking up residence in the brand-new Odd Fellows Home, financial trouble led the orphanage to shut down. At the time of this 1972 shuttering, the home had given shelter to over 1200 children.

The Odd Fellows had a building without a purpose, and for the next couple of decades, the Odd Fellows Home housed a variety of community-based programs that matched their mission of aiding children in the local area. However, it was becoming clear that the building needed a dedicated purpose. Enter: Allegheny College.

Allegheny had failed to purchase the land that the original Odd Fellows Home sat on, and subsequently failed to purchase the land during the era between the demolition of the old home and the construction of the new facility. After several years of interest in the late 90s, the property was sold to Allegheny in 2001 under a long list of conditions and agreements between the college and the Odd Fellows.

For the past 20 years, Oddfellows Hall has been home to the English and Philosophy & Religious Studies departments. In that time, faculty and students alike have observed strange phenomena within the walls of the former orphanage. It was not long before rumors — not to mention potential evidence — of haunting started coming to light.

“The first year I was here, I was teaching a nonfiction workshop in Oddfellows Hall and a student came in a little bit late,” said Professor and Chair of the English Department Matthew Ferrence. “I said ‘You’ve scared the ghosts’ and the door slammed behind him. Later that afternoon, I was sitting in my office on the second floor of Oddfellows Hall. The same student walked by and a book flew off my shelf.”

Ferrence went on to explain that, while he is unsure if he believes in ghosts, he has since investigated what may be haunting Oddfellows Hall. After consulting with a colleague — Professor of English John Miller — he believes it is possible that, if Oddfellows is haunted, it may not be a regular spirit wandering the halls, but rather a poltergeist attached to the energy of the young former residents of the orphanage. Other faculty have reported that their office lights turn on and off without warning or human interference — a harmless yet unsettling prank that is a classic sign of poltergeist activity.

There have been other strange occurrences in Oddfellows, too.

“The (haunting) in Oddfellows was this one very thin wall,” Jaedon Williford, ’22 said of his paranormal experiences in the Philosophy & Religious Studies wing. “There was an extreme chainsaw sound and bumping sound that would come from that specific wall. It would just happen every single night, every time I was in there.”

The long and intriguing history of Oddfellows Hall certainly serves as fodder for any enthusiastic ghost hunter at Allegheny College. But are the rumors true? Does the eerily silent Oddfellows Hall lend itself to paranormal activity or simply increased paranoia? Are the ghosts echoes of humanity or merely human constructs?

For Halloween, The Campus assembled a team of ghost hunters to investigate the supposed haunting of Oddfellows Hall. Head to Instagram @ac_campus to watch the recap of our paranormal investigation.