Halloween Party at the Sycamore 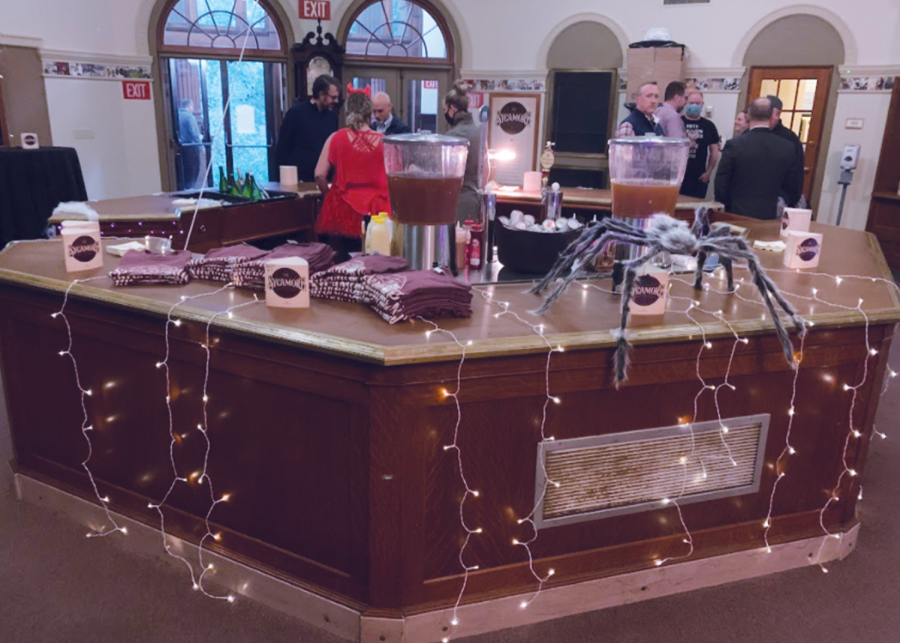 The Sycamore returned to Reis Hall for a Halloween themed evening of drinks, food and music on Oct. 21.

Surrounded by spooky decor, attendees enjoyed festive drinks, such as caramel apple punch, and some even came dressed in costumes for the occasion.

For the monthly event’s second go-around, significant changes were made in order to create a more welcoming atmosphere to both staff and students.

“We were like, ‘this is more of a coffee shop vibe,’” Parkhurst Marketing Coordinator Daisy Rundio said. “We want more of an exciting and pub-like beat. We’re really hoping more students come throughout the night as well. That’s really our goal so we brought in the DJ that was at late night breakfast and we’ll hopefully draw in more students instead of it being mostly faculty.”

The change in atmosphere was noticed by students.

“I wasn’t here last time but my friends said it was different from how it is today,” Jean-Arlette Legrand, ’24, said. “Obviously there’s a Halloween theme going on now that wasn’t here but I can tell they’ve tried to give the event an upbeat vibe.”

The Sycamore is still in its experimental phase and it has taken time for some people to get used to the idea of students and staff rubbing elbows while drinking alcoholic beverages together.

“The purpose of The Sycamore was to bring the campus together and I’m not sure why there’s hesitation about that,” Director of Conference & Event Services Lynn McManness-Harlan said. “People seem apprehensive about the idea of students and faculty partying together. But it’s not partying, it’s just about making connections.”

McManness-Harlan has seen the value of student-faculty relationships in her past and hopes that others will get to experience it as well.

While attending a conference at Damon University a few years ago, McManness-Harlan was approached by a lady who overheard her name and where she was from. The lady asked if she knew Ed and upon McManness-Harlan’s response that Ed was her father, the lady began crying.

“I am where I am today because of how much your father helped me in college,” the woman said.

That help even extended beyond college as the woman told McManness-Harlan the story of how after losing her photographer for her wedding she called Ed. Despite recently having surgery he came and photographed the wedding for her.

Both of McManness-Harlan’s parents taught in colleges and would meet students at the local pub, where the setting allowed for a sense of equity amongst student and staff and fostered real connections.

“After my father had passed, Gretchen Beck was at a conference and she told me that they honored my dad and the person who put it together was a college student who worked with him in the 70s.”

As Allegheny College attempts to boost school spirit, The Sycamore offers an alternative form of school spirit than what most are used to.

“I think it’s really important to think about school spirit in a different way from just being about athletics,’’ McManness-Harlan said. “The Sycamore promotes a different kind of school spirit where we’re interconnected and meeting different people.

The Sycamore will continue to undergo changes as the staff works to find the sweet spot between party and an intimidating networking event.

“We are always looking for student input on what they would like to see at The Sycamore,” Vice President of Finance and Administration Courtney Hild said. “They can reach out to me specifically at [email protected], Stephanie Lang from Parkhurst at [email protected] or through our Instagram page @thesycamoreac.”

The pop-up pub is expected to return again in November and according to McManness-Harlan, you never know who you might meet there until you go.

“So who knows, you might meet the person who’s going to take the pictures at your wedding or someone who will guide you on a career path in a direction you wouldn’t have considered,” McManness-Harlan said. “That’s why I think The Sycamore is important to have on campus.”