Shadow-cast to perform a Halloween classic 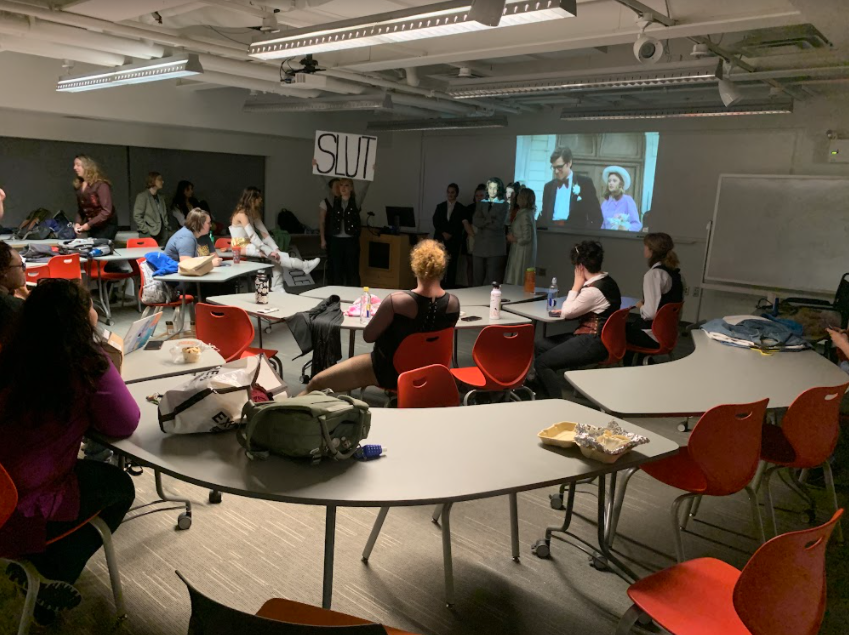 On Wednesday, Oct. 20, each member of The Rocky Horror Picture Show gathered in room 203 of the Vukovich Center for their final dress rehearsal.

The Rocky Horror Picture Show is a classic among its cultish audience and is very popular around Halloween time each year. Hosted by Student Experimental Theatre and Gator Activity Planning, is a shadowcast of the 1975 film, meaning that the cast acts it out as it plays in the background.

As the room began to fill up, fellow cast members gasped, pointed and raved about each other’s costumes as they saw them for the first time.

“You look decrepit and sexy,” a cast member yelled.

The buzz in the room only let up once the movie began to play on the projector and the cast took their places. Some stood in front of the screen where the movie played and others seated themselves at the spaced out tables to mimic the audience who would play a key role in the show.

“Rocky Horror is a raunchy and kind of cultish movie,” Sydnie Patton-Neil, ’23, said. “It’s one of those things where you need audience participation to watch it because if you just watch it by itself it’s a terrible movie, not going to lie. What actually makes the movie is the production because there’s a lot of audience participation, dancing and call backs.”

If you are looking for a meaning or deeper message to the movie, you are not likely to find it. The chaos that surrounds the movie’s plot and the audience’s antics create an unmistakable atmosphere.

“There is absolutely no plot and it’s very inappropriate and crazy,” Mycah Quevillon, ’25, said. “It’s kind of a gathering point for queer people so the show is in that vain of embracing what other people would call absurd. It’s an excuse to let loose and only focus on making the show as good and uncomfortable as possible. If you aren’t uncomfortable then you aren’t doing it right.”

While the cast has fun with their performance, it took a lot of hard work to bring the whole thing together.

“The atmosphere at rehearsal is chaotic but a lot of fun,” Rachael Pieto, ’23, said. “They’re also three hours long though so it kind of gets tiring. We aren’t cranky by the end but we’re ready to go. We have so much fun doing it though that I don’t even mind.”

There are also many people who work behind the scenes in order to make the show a reality.

“I do rehearsal reports, so I’m typing up what we did and things we still need to get like props and costumes,” Patton-Neil said. “Making sure everything is in place is important so everyone isn’t running around like a chicken with their head cut off.”

Although it may seem tedious, Patton-Neil said she is not put off by the requirements of her position.

“This is going to sound dorky but I really like organization,” Patton-Neil said. “I like to make sure everything is where it’s supposed to be because when that’s the case it makes for a better show.”

GAP president, Victoria Smith, ’23, who is helping put on the show through her club, thinks that the show has been guided in the right direction.

“I think the whole show is bordering between decrepit and sexy and we found the sweet spot,” Smith said.

The cast is set to perform in the lobby of the Henderson Campus Center at 10 p.m. on Oct. 22 and 23. Those who attend and have not been to a live call back show before should expect an initiation before participating in a raunchy, crazy and fun production.