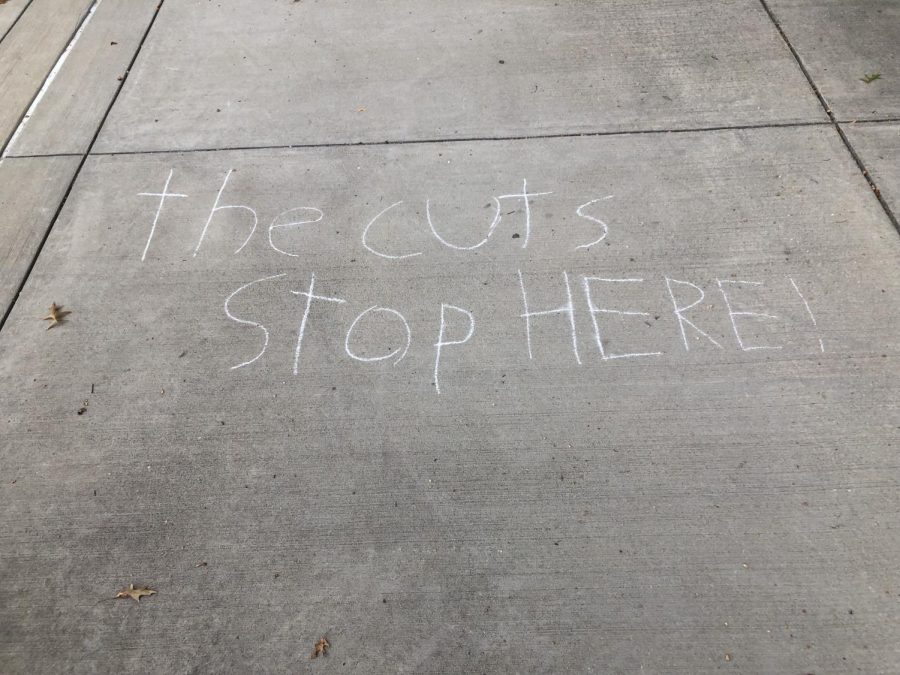 All across campus a quiet buzz can be heard; chalk lettering on every corner of campus, questions and queries pushed around from student to student. The questions vary in tone and diction but the denotation is always the same: why are staff cuts happening, how are they taking place and most importantly, who are the staff cuts affecting? Students worry not just for their professors and mentors but also for themselves to an extent, while faculty keeps tight lipped for fear of repercussions. With the college’s apparent reorganization happening at the beginning of 2022, the buzz grows louder as the time moves on.

“I’ve been really discouraged by some of the interactions I’ve heard,” Provost Ron Cole, ’87 said on the topic of misinformation surrounding the situation.

Despite the magnitude of the situation, it seems that the campus community is largely in the dark about the ins and outs of what is happening with the college’s restructuring process. Information coming from students, faculty and administration is conflicting and contradictory, with professors declining to even comment on the process in most cases.

Cole attempted to provide more information by giving a presentation to ASG on the staff cuts, the process behind them and the reason they were taking place. He explained that due to the declining number of highschool graduates and the declining number of high school graduates that are pursuing higher education, the college will have less students and therefore less revenue. This decrease in people who are willing to pay for schooling in turn means that the college will have a lesser need for teachers and professors and less revenue to pay them. However, that presentation and the administration’s general stance has left some students with more questions than answers.

“(The college’s) endowment has grown significantly (from 2019 to 2021),” Aubrey Hall, ’22, said. “So part of my confusion, as a student, is if this endowment is growing why is the college saying that they’re in a financial position where they have to make faculty layoffs?”

Students themselves are taking action to fight back against the staff cuts. They have organized in various capacities to raise awareness about the staff cuts and spreading information on the situation. Across campus in various spots, white chalk  asks students to “unite to oppose staff cuts” by messaging @acunite to 81010.

By texting @acunite to 81010 brings one to a two-page document, composed of bullet points that outline what the creators of the document believe they know about the situation. The Campus has not verified the claims made in this document.

“Allegheny College’s financial woes being used to justify these decisions are greatly overstated,” a portion of the document reads. “The college has been, and is currently, in the process of costly capital projects such as refurbishing Bentley, and hiring new deans. … As it is not a matter of financial necessity, but of reacclimatizing the school’s priorities to other capital projects. The college has had insufficient time to gather data that gauges the success of these administrative investments.”

Students are putting a lot of emphasis on this part of the staff cuts, that the school has enough money to avoid laying off staff but instead is directing that money elsewhere.

“Allegheny’s making claims about enrollment and financial difficulties,” Hall said. “That’s kind of contradicted by the fact that they’ve created new administrative positions. So part of that corporate restructuring is doing exactly that; it’s like, moving these shared governance decisions, away from something that’s looks a little bit more democratic, involves more faculty, and more toward something that’s oriented toward administrative decisionmaking and the role that administrators play as decision makers, and part of that is that one of the recommendations that Inside Higher Ed makes for the kind of tasks force that right now, one task force is overseeing part of this or making recommendations to administration would be for those task force members are elected to that body, from my understanding, the people who are currently operating on that task force were appointed by the administration they were not elected.”

The task force is meant to finish its work by December and provide a report of its findings to the Provost, President and faculty council. The Provost will be tasked with creating a faculty staffing plan which will go to the President and the Board of Trustees by February, according to Cole.

Despite the discrepancies between what the administration’s perspective and the point of view of most students, the thing that it seems everyone can agree on is that this is not an Allegheny only phenomenon. Other colleges around the country are doing the same sort of review process, especially after the financial crisis caused by the COVID-19 pandemic, and it seems that it’s going the same way elsewhere as it is here at Allegheny, like St. Joseph’s College in New York.

Several faculty members declined to comment to The Campus.

In a cloud of conjecture, with the campus community so distrustful of the intentions of the upper echelons of the college it can be hard to get at the facts of the matter. The most important fact is this: the review process is currently happening, now, and no official decisions have been made yet.