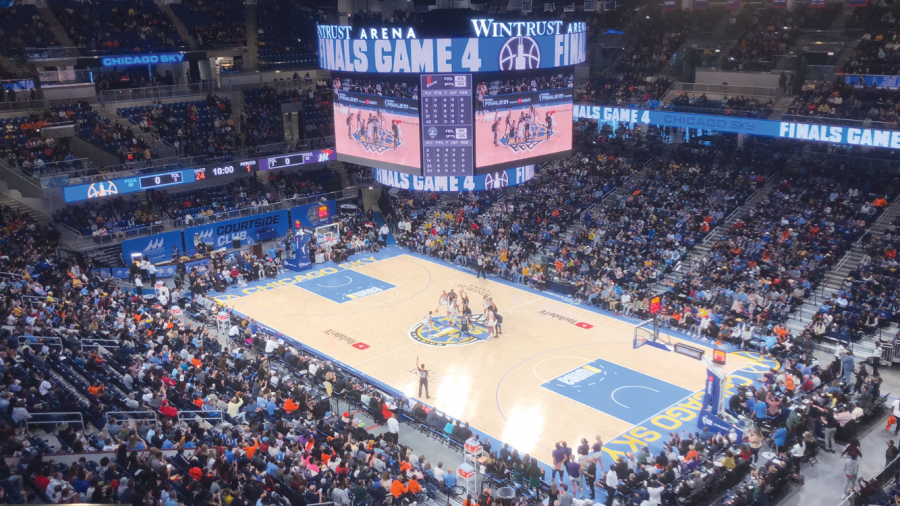 A view of game four of the WNBA finals between the Chicago Sky and Phoenix Mercury on Oct. 17 at Wintrust Arena.

The Chicago Sky became the 24th WNBA champions on Sunday, Oct. 17, after defeating the Phoenix Mercury 80-74 at home in the fourth game of their five game finals series. This title is the first for the Chicago Sky in the 15 year history as a franchise.

As the higher seed, the series began in Phoenix with a 91-77 victory for the eventual champions. Game one for the Sky was led by series MVP Kahleah Copper as she earned a double-double, scoring 21 points and bringing down 10 rebounds. Thirteen-year veteran Candace Parker was also impressive, scoring 16 points in the win while shooting 70 percent from the field.

Game two of the series proved to be closer than the lopsided first game, as the Mercury squeaked out an overtime win, 91-86. Brittany Griner led the way for the Mercury, scoring 29 points and collecting nine rebounds. In overtime, Diana Taurasi shined, scoring eight of her 20 points in overtime, as well as making a crucial steal with 36 seconds left to set up the game sealing layup from Skylar Diggins-Smith.

“The second game was definitely the most exciting game that I watched in this series,” Nate Stover, ’23, said. “It was just a good back and forth game and the Mercury really had to grind out their win.”

The third game saw the Sky match their point total from the game before, however their defense shined in the 86-50 blowout win. The Mercury shot just 25 percent from the field as the Sky cruised to victory without forfeiting the lead in the contest. Offensively, Cooper continued her frequent scoring, turning in 22 points on the night, while Parker contributed with 13 points of her own.

In game four, after trailing for three quarters, the Sky outscored the Mercury by 15 in the final 10 minutes of the series to secure the victory. With just under two minutes to go, Candace Parker tied the game for the first time in the fourth quarter with a three-pointer, followed by a Stefanie Dolson layup seconds later that would keep the Sky on top for the remainder of the championship game.

Griner was the leading scorer of the game turning in 28 points as well as seven rebounds. However a strong defensive performance from Parker, who had 4 steals and 13 rebounds, kept the rest of the Mercury players out of the mix. Offensively, the Sky were led in scoring by guard Allie Quigley, who turned in 26 points in the win.

“It seemed like both teams had to fight their way to get to where they were at and the best team won at the end of the day,” Roberts said.

Both the sixth seed Sky and the fifth seed Mercury entered the WNBA championship series unexpectedly as neither team entered the playoffs with a bye round. Because of the format of the WNBA playoffs, this meant their paths to the finals were the most difficult as they each had to win more games than higher seeded teams.

This year’s finals marked the first time since the 2007 season that the number one-seed was not present, as well as the first time that either a fifth or sixth seed team has ever competed in the finals. Furthermore, the Sky became the lowest-seeded WNBA champions in the history of the league.

Roberts commented on the uniqueness of two lower-seeded teams doing so well in the WNBA playoffs.

“I thought it was a crazy finals considering neither of the teams were a top seed in their conference or division,” Roberts said. “So to see two underdogs playing each other was sort of cool to see.”

While important to the Chicago Sky franchise, this championship win holds a special place for Chicago-native Parker, after she signed a two-year contract to join her hometown team at the beginning of the season. This decision to return close to home was one that paid off for Parker, who wanted nothing more than to bring a championship to her hometown.

Parker reflected on the reality of achieving a dream of hers in her postgame interview.

“It feels amazing, my high school coach is here, we got the whole city here, and it’s just amazing how Chicago supports us,” Parker said. “I mean, we are champions for life now.”