Bentley rededicated after more than three years of work 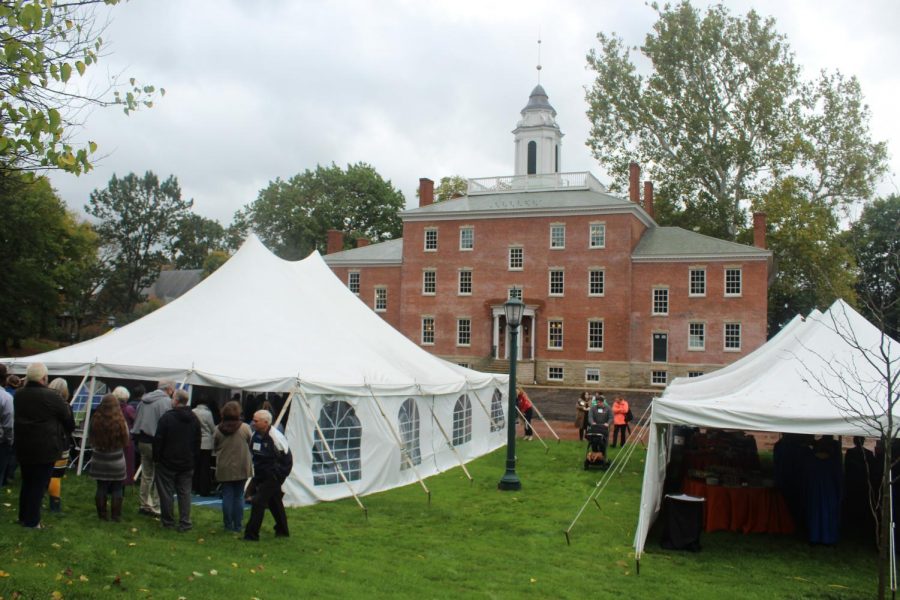 The catering tent (R) and main event tent erected on Brooks Lawn for the rededication. Not visible to the left was the check-in tent where attendees who RSVP’d received their nametags and tour group assignments.

On the rainy Saturday afternoon of Oct. 16, three tents packed with people bustled across Brooks Walk from Bentley Hall. They had come to celebrate the rededication of Bentley Hall, Allegheny’s first permanent building, after three years of renovations that began in 2018.

“We now have a safe, beautiful Bentley,” said Patricia Bush Tippie, ’56, in an address to attendees.

Tippie, along with her husband Henry B. Tippie, challenged the college and its donors to match their $7 million gift to renovate Bentley after a tour of the building revealed its flaws to the couple.

The building was emptied in early-September 2018 with an expected completion of August 2020, but the COVID-19 pandemic — and the havoc it wreaked on global supply chains — delayed completion more than a year.

The event began with a short program of speakers, including Tippie and college President Hilary Link, who acknowledged how good it felt to move into the building for her first time as college president.

“For those of us working in Bentley, it is truly an honor and a joy to come to work every day,” Link said.

Tippie spoke last, and celebrated not just the building but the other donors who matched the initial $7 million challenge.

“Not only did your gifts restore Bentley, but we now have a $1 million endowment fund that guarantees that Bentley will be taken care of for years to come,” Tippie said.

After the conclusion of the speeches, Link honored some college employees who had contributed specifically to the project, including alumnus Jonathan “Jed” Miller, ’69, who decorated the interior of the building, and Willis, who oversaw the project and was also honored with a plaque in Bentley.

“I’ve done a lot of (construction) projects and they were just ‘projects,’” Willis said after the event, tearing up. “For the first time, this is my project.”

Following the ceremony, which concluded with a singing of the alma mater, attendees were given tours of Bentley in pre-assigned groups. The first tour, led by Associate Vice President for Institutional Advancement Phil Foxman, ‘90, and Willis himself, consisted primarily of the Tippie family.

Tour groups entered through the western entrance, which is classified as accessible as per the Americans with Disabilities Act. Immediately upon entering the building, the open stone walls serve as a “Window to the Past.”

These windows dot the building’s structure, and include open spaces in the walls and ceiling for visitors to see what the building originally looked like in that specific spot. For example, what is now the president’s office was the president’s residence when the college was wholly contained in Bentley. The original wall demarcating that line is visible today through a small rectangle outside the office.

Another historic element of the building’s interior design was the paint color.

“We know every color that’s been used in the history of Bentley,” Willis said, citing the extensive paint samples taken during the renovation.

Though much of the building has stone or wood flooring, custom-made carpets were also extensively used. These carpets, ordered from the United Kingdom, were procured from the same firm that produces rugs for the Queen of England.

The windows also had to be ordered as custom-made, because age and structural stresses had warped the frames to the point where the window sizes were no longer standard across the structure. The windows have almost all been returned to the original 6×6 format, though they are now updated with modern insulation technology.

The third floor also contains a student-oriented space: a seminar room for classes. One end of the seminar room is decorated with chalk drawings and signatures from students, a tradition that began in 1964 when the third floor of Bentley was closed to classes because it was not up to fire code. Students would go and sign their names to “leave a mark,” and in 2015 the chalk room was closed to preserve the original signatures. Though only one wall remains, the remaining three have been preserved and will be added back to the seminar room and adjacent lobby as the space is fully finished.

Bentley’s completion comes in Allegheny’s 206th year, as the school faces down the aftermath of the COVID-19 pandemic and the financial deficit it created. But Willis is not concerned.

“I think we have a president who’s decisive, who understands what’s needed to do, and she’s able to make tough decisions,” Willis said. “It’s a challenge now for almost all institutions of higher education, but particularly small liberal arts colleges that don’t have state support or federal support. We’re relying on the commitment of the (alumni) and the donors, and Bentley is a living example of what happens (with that support).”

Bentley was Willis’ last project as director of major capital projects , and he is proud of where the building stands.

“I could not have imagined a better way to finish my career, nor a better place to do it,” Willis said.