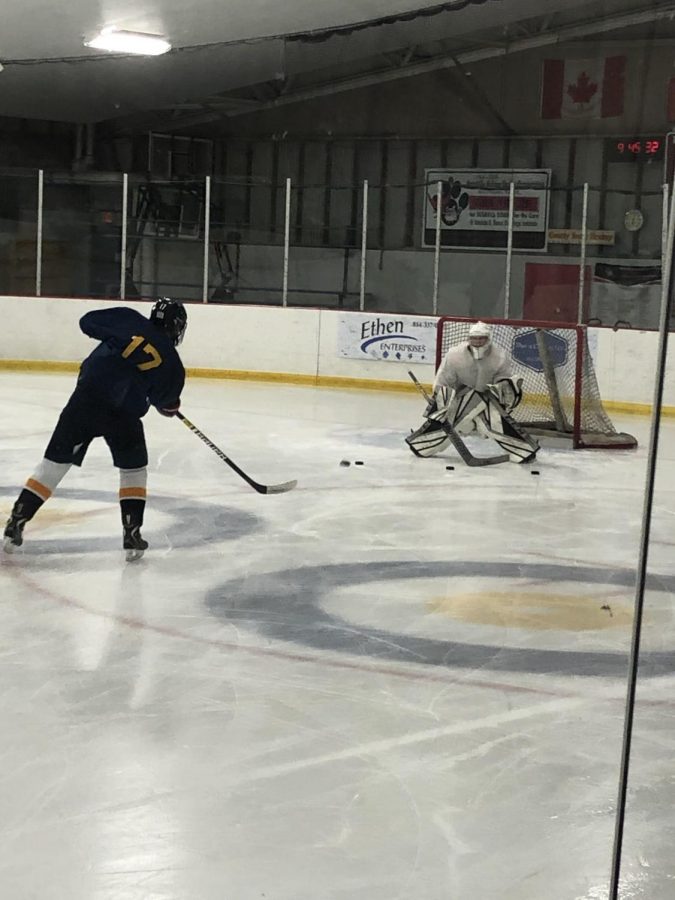 Brian Beck, ‘22, takes a shot against Brady Mosburger ‘25 during practice on Monday, Oct. 11 at the Meadville Area Recreational Center.

After only having a few practices so far this season, club hockey is on their way to their first couple of games. The team practices on Mondays at 9:30 p.m. and Thursdays at 7:45 p.m., for about an hour each at the Meadville Area Recreation Center.

After not being able to play last year because of COVID-19, some of the members say they are a bit rusty but will soon be right back to where they were before the pandemic. Harley O’Brochta, ’23, only had one season under his belt before this year.

“The guys wanted to do something, and because we didn’t do hockey last year the guys are a little rusty still but we will be ready for game time,” O’Brochta said.

Club hockey can only have 22 players per game, but the Gators have 25 people on their roster. At the moment, some athletes can not play because of other sports. They will not be making cuts but during some games they will need to leave some people out of some games and give them another chance later.

“It’s not D1 hockey,” O’Brochta said. “It’s not some major thing, it’s a club team we are trying to have a fun time.”

In the past, the club hockey team has had some accomplishments. O’Brochta discussed one his favorite moments on the team as a first-year player.

“Going out there, we look like a ragtag group of guys, my freshman year so two years ago in 2019 we made it to the semifinals,” O’Brochta said. “Two years before that they won the cup, they straight up just won the season.”

The club hockey team’s goal is to build a legacy of winning hockey at Allegheny. Karl Fuchs, ’25,  mostly played on travel teams in high school. Fuchs reminisced about when he began playing hockey and is excited to continue his career at Allegheny.

“I have been playing since I was eight years old,” Fuchs said. “My parents got me pads for my birthday.”

Jake McGee, ’22, born and raised in Pittsburgh, Pa., is a goalie for the team, but has yet to play a game. Since he was unable to play last year, this is his first year playing in a collegiate game. Last year, he played on the lacrosse team which filled up his time and was able to keep him active. McGee has practiced all over Pennsylvania, but is most excited to play against Robert Morris University.

“I have some buddies from there, (and) I have a lot of experience on that rink,” McGee said.

Meanwhile, O’Brochta has been playing hockey since he was 12. He usually plays defense but right now is playing forward and  holds the title of “the unofficial team mascot.”

“I’ll just mess around and try to get the team going,” O’Brochta said. “I just try to be a little more light hearted than super serious, cause we need that good balance on a hockey team. If we are all super serious then the tension is going to build.”

Although he is “the unofficial team mascot,” O’Brochta included that when it is time for serious competition he is ready to buckle down and play hard.

Some of the hockey fans can not wait for them to get back on the ice after not being able to see them for over a year.

“Well I saw them freshman year and I had a really good time seeing them play out there,” Ben Grant, ’23, said. “I am really excited for them to start up again, so I can go out and see them again.”

Adam Cohen contributed to this report.