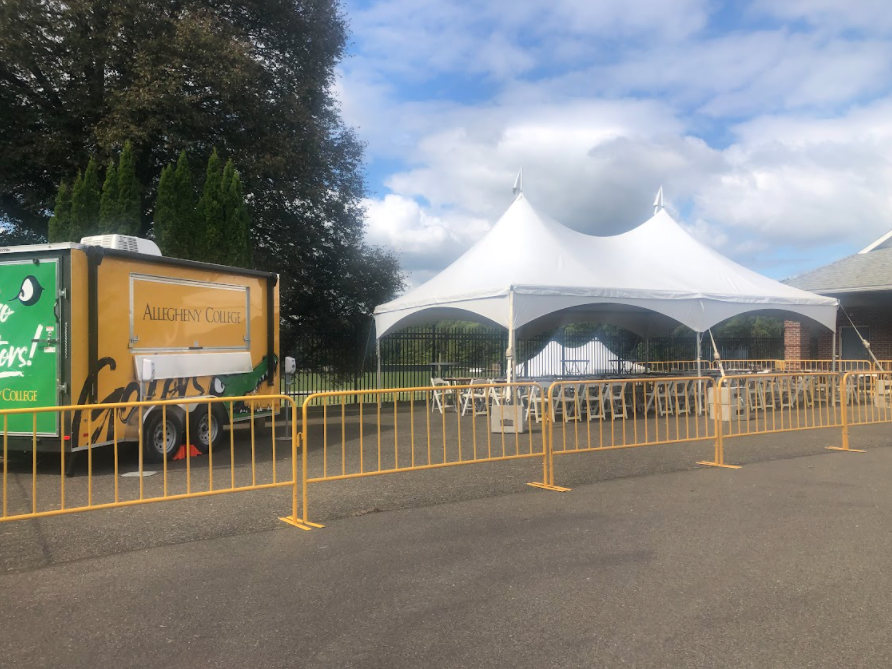 The truck and the designated area for alcoholic beverages are located inside the football stadium. Fans can stop at the truck on their way to the home seating section.

In an academic year that has reintroduced old norms and even relaxed others, Allegheny College has begun selling alcoholic beverages at certain campus events, including home football games.

According to Allegheny’s Vice President of Finance and Administration Courtney Hild the decision to do so came with the goals of increasing revenue through sales and to promote school spirit.

Though commonly referred to as the “beer truck,” Hild provided clarification on the accuracy of that name.

“The trailer was purchased primarily to sell Allegheny merchandise at college events and it’s actually being used to sell merchandise as of right now, not beer,” Hild said. “At the home football games, Parkhurst is selling alcoholic beverages in the newly-created beer garden, but not out of the trailer.”

“Think of it as a ‘satellite bookstore,’” Hild said. “The two main goals of this project are to increase revenue from sales and to build school spirit.”

Students are beginning to get used to the gated off alcoholic area in the Frank B. Fuhrer field, but were not so accustomed to it at the beginning of the year.

“I didn’t really have any expectations beforehand but it was definitely a fun surprise to find,” Chloe Rabold, ’22, said.

Many students of age have already ventured to check out the selection.

“It was solid,” Caden Hinkley, ’23, said. “There was a good White Claw selection with the four-flavor White Claw pack. They had one lager and one IPA as well, so I would say it was a good selection overall.”

Though there was a wide variety of drinks to choose from, students found that they had less decision making power when it came to pricing.

“I went with the IPA myself,” Hinckley said. “It was a bit pricey but what can you do? It was still a good purchase in my book.”

“I think that the selection definitely appeals to college students, but the price doesn’t,” Tully Taylor, ’22, said.

There are still other reasons why some students of age are opting to take their seat in the stands instead of stopping for a beverage.

“I think it’s been a good addition to games but I wish it was closer to the field or that we could leave the enclosed area with the drinks we buy,” Rabold said.

Though the introduction of serving alcohol at games was done in an effort to help boost school spirit, some students do not feel they can do so in the beer garden’s confines.

“It makes no sense,’ Hinckley said. “I know it probably has something to do with some law but they would get a lot more money if they didn’t have us caged in like some animals. But it ruins the whole vibe when you’re sitting in there and you can’t cheer on the game.”

Despite any gripes from students, the beer garden has been called a success by those who are responsible for it.

“The turnout and the response to the alcohol sales at the football games have both been great, maybe even better than expected,” Hild said. “We have increased security at the events to make sure all drinking laws are strictly followed, and are working closely with Student Life to be sure that we remain in compliance with the Drug Free Schools Act. We want this to be safe, fun, and profitable for the college.”

Even though there are possible improvements to be made, most students think it has been a worthwhile component to football games.

“I do think it’s been a fun addition to the football games, though,” Hinckley said. “I know some people stop there before the game starts so I still think it’s been a good thing to have and hope it comes back next year.”

​​Mo Mansour conducted the interviews included in this story.