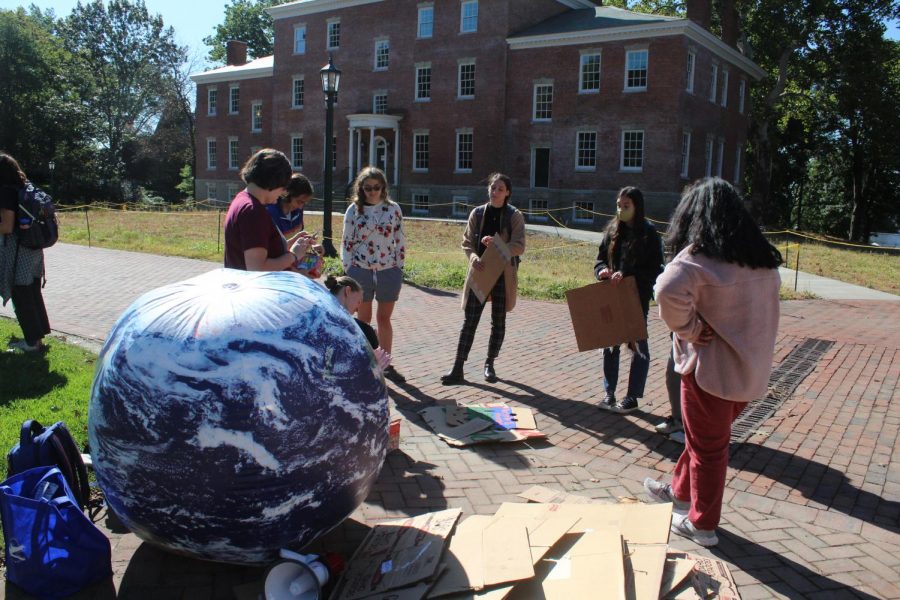 Students collect signs next to a giant inflatable globe that Candace Burkhammer, ’22, co-president of SEA, brought to the event.

Dozens of students marched on Brooks Walk in the late morning of Friday, Sept. 24 in the first climate strike since Allegheny announced it had achieved climate neutrality in April 2020. The event was led by the Students for Environmental Action and the Green Students of Color, with student groups like the Bird Club, Sustainable Design Team, Allegheny Socialists and members of the department of environmental science and sustainability also in attendance.

“We are here to protest against our government and their negligence (in) listening to us,” Bianca Sanchez, ’24, president of Green SOCs. “Why would we go to this school if (we’re) not going to listen to the educated?”

Attendees met at Brooks Circle, where they chalked the bricks of the circle with environmental messages and exhortations to act on climate change. These messages survived well into Blue and Gold weekend before being washed away by rain.

Though the event began at 11 a.m., many students did not arrive until after their classes broke at 11:10. Only once a sizable crowd had gathered did the organizers begin to speak. In addition to hearing from leaders from SEA, some members of Allegheny’s environmental science department also spoke.

Matthew Betherum, assistant professor of environmental science and sustainability, was one of the professors who came out to support the student march.

“On a personal level this is an issue that I care a great deal about in my own status as a human being on this planet,” Betherum said. “It’s also a primary focus of my own research. I do work with climate policy so this is something I’m pretty intimately familiar with. And I’m a broad supporter of collective, solidarity-based public action on these issues.”

Candace Burkhammer, ‘22, co-president of SEA, led the march and was one of the first people who arrived to set up.

Previous student action — most notably last September’s vigil in honor of Breonna Taylor — has not always been met with such administrative approval.

“(This was) Blue and Gold — Homecoming — weekend, so we had to ensure that we aren’t going to interrupt any of the Homecoming events too much,” Burkhammer said.

“But this is an important event that should take place on campus, and (the administration) was totally supportive of the event and us organizing to promote the importance of this (issue).”

Past vigils and strikes have usually taken place on the Gator Quad in front of the Henderson Campus Center. Burkhammer said that the strike was planned for Brooks because of the weekend’s festivities.

“There were a ton of events taking place in the Gator Quad,” Burkhammer said. “Also, we thought we could get the lunch crowd going in and out of (Brooks). I feel like there’s more traffic here, so that’s why we picked (Brooks as) the location.”

Sanchez also noted that marching from Brooks to the Campus Center — the group’s original plan — was not approved by the administration due to safety concerns.

“The people up high thought it was a little bit dangerous to cross the road with all the signs and a bunch of students,” Sanchez said. “Also they did not want us to disrupt Blue and Gold weekend, and we respect that.”

The event was inspired by the “Fridays for the Future” campaign started by Swedish climate activist Greta Thunberg. Thunberg rose to prominence in August of 2018 after she began to skip school every day to sit in front of the Swedish Parliament in protest of governmental policies on climate change.

The organizers of Allegheny’s event do not plan on making the strike as regular or persistent as Thunberg’s.

For Bethurem, the strike is a form of broad-based student action that invites students who are not ordinarily interested in the climate

“If you’ve got a college atmosphere that fosters that kind of involvement, then maybe people who are on the periphery of this conversation, who might otherwise not get involved, can see that there’s a pathway to doing this,” Bethurem said. “I think that can be really important.”

Betherum also noted that the event strikes deeper to Allegheny’s objectives as an institution.

“We really do a good job of campus sustainability here,” Bethurem said. “These kind of events, taking these kinds of actions really fits in with what the college indicates that it supports with regard to overall sustainability and climate action.

Sanchez also encouraged students to get out and make their voices heard.

“Go find a climate strike near you, protest against the government and put yourself in something that really matters,” Sanchez said.