GAP ‘shoots for the moon’ with Wingfest 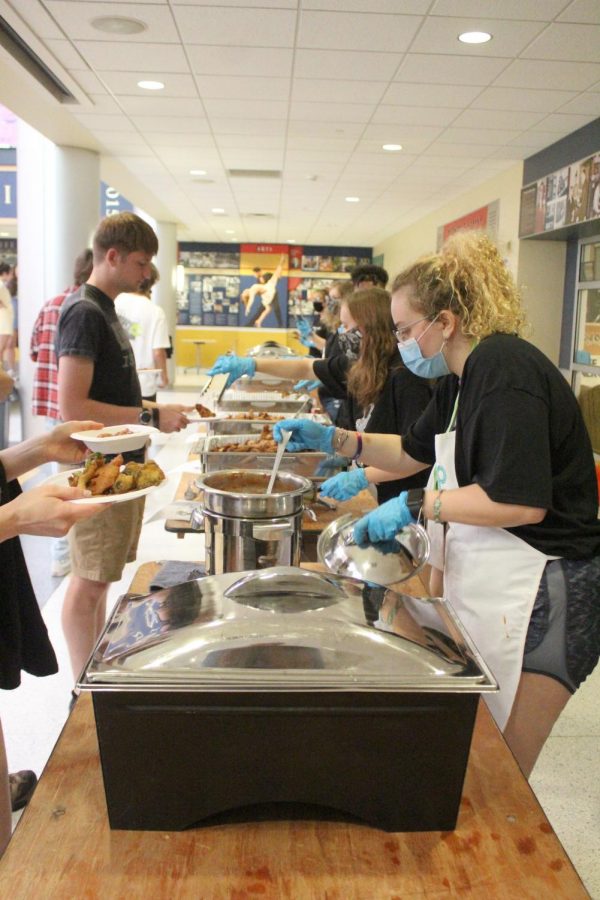 Syd Hammerman, ’25 (right), serves a vegan attendee of Wingfest in the Campus Center on Sept. 19.

The scent of fried chicken wings drenched in various sauces wafted through the halls of the Henderson Campus Center on Sept. 19, signaling the return of one of the most beloved traditions at Allegheny College — Wingfest.

“It’s really exciting to see it back in full swing, in the Campus Center, with outside, non-Parkhurst wings,” said President of GAP Victoria Smith, ’23. “I’m excited for what this means moving forward.”

Though announced by GAP in a Sept. 7 Instagram post, the group ultimately did not procure wings from Firehouse Grill. Smith cited market forces that have driven up the price of meat — and wings — as the basis for the group’s decision.

“It became a practicality issue of, ‘can we really afford to spend this much on wings?,’” Smith said. “Instead of getting eight wings, everyone (got) six wings.”

Smith also noted that Firehouse was already a household name on campus.

“(Students) know what Firehouse is, and so we’re not cutting out a local favorite,” Smith said. “People have gone to Firehouse before.”

There were few bad words for the wings. Roman Morales, ’24, and Natalie Frenelle, ’24, thought the wings were, “pretty good.” Attendees were able to enjoy up to six free wings at the event, but students who helped work the event were able to score a few extra.

“I signed up through my greek organization,” Joseph Friedman, ’23, said. “We just signed up for it on this spreadsheet with our times and roles. We get wings and we were guaranteed a shirt, and we got more than just six wings. I’ve had like twelve.”

The wings kept people coming back for as many as they were allowed and in general received very positive reviews.

“I’m a huge fan of the honey sriracha and the barbeque wings,” Friedman said. “The garlic parm was really good too, though.”

Price echoed this sentiment, stating that the honey sriracha wings from Willy G’s were her favorite.

One contributing factor that helped ensure satisfied taste buds was that students were responsible for choosing the restaurants they sampled.

“Normally we contact (local restaurants) but this year we asked the student body what the best place to get wings is,” Smith said. “We put it on instagram and put it in our emails and then went with the three most popular which were Willy G’s, Hunters’, and Chipper’s. We contacted those businesses individually and what they get out of it is that we put their names on the flavors so if someone eats one and really likes it then they’ll know to go to that restaurant and get those wings.”

Despite the democratic system used to select the wings, there were still some suggestions for improvement from students.

“I just wish the ‘Extra-xtra Hot’ was hotter,” Friedman said. “It’s honestly not that hot. If you like hot food go for it, but if you’re really into the level of spice then you’ll be a little disappointed.”

Though she enjoyed the wings, Anabella Zgurzynski, ’25, was also rather unimpressed with the spicing on the “Extra-Extra-Hot” wings, though Nealey Clare Wheat, ’25, thought that there was certainly flavor there.

“Saying as a person from Texas, it has a kick to it, but it’s not anything detrimental,” Wheat said.

This year’s theme for the festival was “Wing me to the Moon,” and was the result of a collaboration with the Astronomy Club. While attendees ate wings in the middle of the lobby, the Astronomy Club tabled on a stage set up on one end of the space.

This collaboration is one of what Smith hopes is many connections between GAP and the wide variety of student organizations at Allegheny.

“GAP’s goal for this year is to really increase the amount of collaboration between clubs and between GAP and other clubs,” Smith said. “Because we decided on a space theme for this Wingfest, we said, ‘Who better to reach out to than Astronomy Club?’”

The group’s board was represented by first-year students including Anabell Zgurzynski, ’25, and Nealy Clare Wheat, ’25, but that has not deterred them from dreaming big.

“We’re all freshmen and we’re all on the board of Astronomy Club,” Zgurzynski said. “We had no idea what we’re doing but here we are and we’re having a lot of fun.”

Zgurzynski and Wheat were sitting with Kalli Greevy, ’25, who also serves on the club’s board.

“I’m glad I’m here,” added Wheat. “The wings are great. I like the people I’ve been talking to.”

According to Greevy, the club is the largest it’s ever been.

“We’re especially excited to have a lot of young women in the club,” Greevy said. “Astronomy is definitely a ‘boy’s club,’ so we’re excited to be bringing in a lot of female representation. We love women in STEM.”

Zgurzynski offered the group’s tagline, though suggested it may not be appealing to all.

“Our motto is ‘Space is f—-ing cool,’ I don’t know if you can write that,” Zgurzynski said.

Smith cited the Allegheny College Health Agency’s current guidelines for the loose COVID-19 restrictions, comparing the festival to one of the college’s dining halls which currently operate  at full capacity.

“We have tried to do everything we can to keep it within guidelines,” Smith said. “We didn’t have a wing-eating contest, which is normally a staple of Wingfest, because we didn’t want any problems with that.”

The crowds are a far cry from last year’s Wingfest, conducted at a tent on Murray Lawn. Attendees signed up for a time slot online and then picked up their wings and shirt from the tent before taking the wings elsewhere to eat. Frenelle was glad that the event was returning to a more traditional setup.

“It’s kinda nice to get into, ‘Oh, this is what we were supposed to have last year,’ and really get to experience college life,” Frenelle said.

Morales walked in thinking that the event was the first since 2019.

“I actually didn’t know there was one last year,” Morales. “But this is really nice. It’s good to see people out and mingling after last year.”